Amy Clampitt in the Berkshires 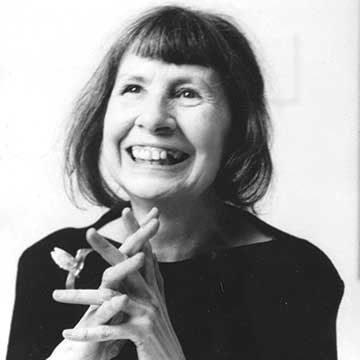 In 1992, American poet Amy Clampitt purchased a modest house near Lenox, MA, with part of the money she had received that year in a grant from the MacArthur Foundation. The MacArthur Foundation makes six-figure, so-called “genius grants” to “individuals who show exceptional creativity in their work and the prospect for still more in the future.” The award has been given to literary luminaries such as John Ashbery and Cormac McCarthy in the past, among many others. These grants are precious to mid-career artists and often propel them to produce extraordinary work that only time and resources allow.

A darling of the literary world

Clampitt’s first full-length collection of poems, The Kingfisher, was published in 1983 when she was 63. Highly acclaimed after that, Clampitt became a darling of the literary world, earning an Academy of American Poets Fellowship in 1984. She would go on to feverishly produce and publish four additional collections over the next decade: What the Light Was Like (1985), Archaic Figure (1987), Westward (1990) and her last book, A Silence Opens, in 1994.

The house near Lenox was a present to herself late in life secured by unexpected resources. After years of small apartments and frugal living, the house was hers to enjoy in the serenity of the Berkshires, a place of her own in which to write and prosper. Sadly, expectations went unmet; within two years of owning the house, Amy Clampitt died of ovarian cancer.

The Amy Clampitt Fund was established through the estate of Clampitt’s husband, Harold Korn, who lived in the house until his death in 2001.

Each year, emerging and mid-career poets from around the world spend up to a year living in the house. Applications are by nomination only and residents are selected by an advisory committee of poets and editors, many of whom knew Clampitt in her life and were involved in shepherding her work to publication. Some Clampitt residents burrow in, to use the precious time and space to finish collections or start new projects. Some happily engage with a poetry-loving community at local libraries and bookstores. All of them leave a trail; the house has a dedicated shelf of published work produced by Clampitt residents during their stay.

Clampitt’s connection to the Berkshires was brief and in truth, her poetry is not wholly infused with a particular Berkshire sense of place. There were other places and things of meaning in her work: birds, ancient Greece, the natural world in general, and Maine in particular. Her poetry doesn’t belong to the Berkshires as say, Wordsworth’s belongs to the Lake District and Dove Cottage.
Nevertheless, through the residency now in its 19th year, visiting poets have appreciated the Berkshires and in turn have connected the life, work, and legacy of Amy Clampitt to the local community. Some Clampitt residents – like recent poet Jessica Piazza – have held readings in places like the Bookstore and Get Lit Wine Bar in Lenox and the Lee and Stockbridge libraries. For many years, an elegant Amy Clampitt memorial reading took place nearby at The Mount, Edith Wharton’s majestic home, and featured some of the nation’s most popular and decorated poets like Billy Collins and Natasha Trethewey.

Connecting Clampitt, art, and the community

This year, on July 21 and August 18, Berkshire residents and visitors will join in a walk that connects Clampitt to the community of the Berkshires in a new, innovative way. Her work will be read during “Walkin’ with WordXWord,” a free, approximately 90-minute moving exploration of The Mount’s grounds and SulptureNow exhibit that features poets, dancers, and other performers responding to the natural surroundings and the individual works of art.

As part of each tour, a poet will read one of Clampitt’s poems that complements a stop on the walk, which, depending on the poem, could be a particular sculpture or vista or natural feature of the landscape. In this new format, visitors unfamiliar with Clampitt’s work will get a gentle introduction to it in a very Berkshire context. In addition to featuring sculpture and poetry, these walks are produced in collaboration with performers from Jacob’s Pillow and Lift Ev’ry voice, an organization that celebrates African-American culture and heritage in the Berkshires.

This year also marks the beginning of work on a dedicated biography of Amy Clampitt to be written by Willard Spiegelman, former Hughes Professor of English at Southern Methodist University and editor in chief of the Southwest Review. Spiegelman is both a Clampitt scholar and the very first resident in the Clampitt house. Taking letters, journals, and ephemera left in her estate, Spiegelman will place the poet – whom he calls the patron saint of late bloomers – in historical and literary context.

By August 27 Clampitt resident Colin Channer will have arrived in the house for six months to read, work, and enjoy precious space to write. His journey to the Berkshires is via Jamaica, New York, and Rhode Island. He may venture out into downtown Lenox on occasion or take in one of the many world-class cultural experiences one can have here in summer. Or, he may just write and observe a new natural setting or ponder the many Amy Clampitt artifacts in the house – her hats, her box of sea glass, or her beloved collection of Keats volumes. Whatever the residency holds for Channer, it will include time and space in the Berkshires Clampitt desired for herself and activity that is likely to “benefit poetry and the literary arts” as intended by her widower, Harold Korn.

In this sense, the poet whose life took root near Lenox only briefly still nurtures other poets to plant seeds and thrive in Berkshire soil. •

On Sunday, August 18, at 3pm, poets, dancers, and other performers will respond to the SculptureNow exhibition on the grounds of The Mount, Edith Wharton’s Home, located at 2 Plunkett St. in Lenox, MA. The Walkin’ with WordXWord at The Mount event is presented in partnership with Jacob’s Pillow, Lift Ev’ry Voice and The Mount, and sponsored by the Amy Clampitt Fund, a fund of Berkshire Taconic Community Foundation.