An Actor’s Actor – A Cop’s Cop

There’s an intriguing phenomenon that occurs when actor Robert Clohessy walks into a room full of strangers, strolls by shoppers in the local market, stands idly pumping gas into his car or waits on the train platform, ready to board Metro North. Double takes. Whispered “I know that guy…” to those nearby. Or, the self-fulfilling pronouncement–“He’s somebody…”

Of course they know him. He’s an actor with over 140 film, television, and live stage credits listed on his voluminous resume. Every Friday night, he’s Lt. Sid Gormley on the CBS mega-hit Blue Bloods, often sitting across the desk from Tom Selleck’s Commissioner Frank Reagan as part of the inner circle.

But Clohessy has been many other characters. For five seasons, he was Officer Sean Murphy on the HBO powerhouse, Oz. For five seasons he was Alderman Jim Neary on Boardwalk Empire, the HBO series that got Bob his Screen Actors Guild Award for Outstanding Performance by an Ensemble in a Drama Series. “I used to walk around the set saying ‘dead man walking,’ because my character was having an affair with Steve Buscemi’s character’s wife. They kept me around… and I was finally killed off in the final episode.” [Spoiler alert!]

And, way back in 1986, there was Hill Street Blues which numbered in its last season cast, Officer Patrick Flaherty.

But, we digress. How Robert Clohessy got from a childhood in the Bronx to a walk-on audition for Hill Street Blues on a Hollywood film lot is a story in itself.

Clohessy’s father was a cop … so the natural migration to those roles in film and on television was not a reach. He didn’t start out that way, however. In fact, he started out in the boxing ring. Growing up, there was a gym across the street from the family home in the Bronx.

In those days, a “gym” was not a mirror-walled, light-bathed collection of elegant designer machines and squealing spin classes. The gym had some punching bags, a ratty locker room, and a boxing ring as the central feature. By the time he was 17, Clohessy had over 40 bouts to his credit and found himself in Madison Square Garden competing in The Golden Glove, the amateur platform that has produced many an Olympic boxer and celebrated professional.

It was an injury that ended his boxing career however, so at the ripe old age of 17, he needed to change direction. “I was never a great student,” Bob admits, so when high school was behind him, he enrolled in the local community college and almost by accident came face-to-face with his future.

“I walked into an acting class – and it was fun,” he admits with a smile. Out-going by nature, the concept of performance was not daunting. Community college led to enrolling in the Conservatory program at SUNY Purchase and starting to get serious about acting.

Life as a hyphenate

Bob Clohessy was a hyphenate in New York early in his career. He paid the bills by working in a New York restaurant and appeared as an “extra” on a network “soap opera.” The pay for being part of the background wasn’t great, but one day he got a call saying he had been cast as a “U-5.” The term meant his character had under five lines, but it was a speaking role and the pay for a day’s work jumped an additional $80. But, he was at work and the television studio was way up town. He had to get off of his shift, catch a bus north, and keep his fingers crossed that he’d arrive in time.

Not every door opens into opportunity, and this one slammed right in Bob’s face … twice. He bolted from the restaurant, missed the bus, then headed on foot the 2 miles north, running all the way. By the time he arrived at the set, it was too late. The role was assigned to someone else. Dejected, he made his way home to the place he shared with several house mates in Hoboken, NJ. When he arrived, there was a message on the answering machine. He’d been fired from the restaurant job for leaving too early.

“But, you keep going,” he can offer, philosophically from the distance of history. For Clohessy, the drive to make it as an actor dictated that he try every avenue, pursue every opportunity.

Home to Hartford to Hollywood

Stage work, especially outside of Broadway, has never paid well. If you’re considered an amateur – not a member of a guild or union – that is even more the case. A blind audition for a stage role came through, however, and Bob was off to the Hartford Stage to appear in a play starring Blythe Danner.

The path to membership in Actors Equity Association involves many hours and many roles, but Bob Clohessy seemed to be a natural. His talent and drive eventually led him all the way to Broadway for Twelve Angry Men. All of this in the midst of his burgeoning television career.

Even when challenged by a devastatingly long nude scene on stage in the Hartford Stage production of Frankie and Johnny in the Claire de Lune, Clohessy immersed himself in his art and garnered immensely positive reviews.

It was his on stage presence in his first Hartford stage performance that attracted the attention of Bruce Paltrow, Blythe Danner’s husband. He suggested a trip to Los Angeles to audition for a new series pilot. Off to LA was young Clohessy, only to be turned down after his audition. But, this time, the door did not slam in his face. In fact, it opened on the studio lot and led across the street to another casting session … this one for a recurring slot on Hill Street Blues. Meet Officer Patrick Flaherty.

A chance encounter, a lifetime union

Clohessy couldn’t stay in a hotel for long, so cast as a recurring character … likely to be in all 22+ episodes of a standard prime time series … he needed a place to stay. At the time, Bob was represented by a talent agent who also had on his roster a young woman who had been acting and modeling in Los Angeles, but wanted to move back East. She had a place to rent.

Married months later, Catherine and Robert called Los Angeles home until 1998, when the allure of living back in the northeast had Catherine come back for a brief skiing vacation. “We talked on the phone one night, and she told me she had bought a house,” recalls Robert. Packing up their two sons and their belongings, Robert headed cross country to join Catherine. “I was moving to a house I’d never seen. Really strange,” he muses. “And, here we are.”

Television pilots, feature films, stage productions, sustaining parts in popular series … the fruits of Clohessy’s prodigious talent and his laser-focused work ethic have brought him to today and to Blue Bloods.

“I was originally cast for one show to be Danny’s (Donnie Walberg) boss in the precinct. We got along really well on set and, before long, I was part of the regular cast.”

When Clohessy’s character moved from the precinct to the inner circle of the commissioner’s office, he was introduced as “a cop’s cop.” Family ties run deep, and Robert Clohessy has been able to channel that depth of family experience into a character that is flourishing in the show’s eleventh season.

So, the next time you see Robert Clohessy at the local market, you’ll be able to slide right past the “Who is that guy?” to “Hey, Bob. How’re you doing?”

We guarantee he’ll be pleasant. After all, he’s a very good actor. • 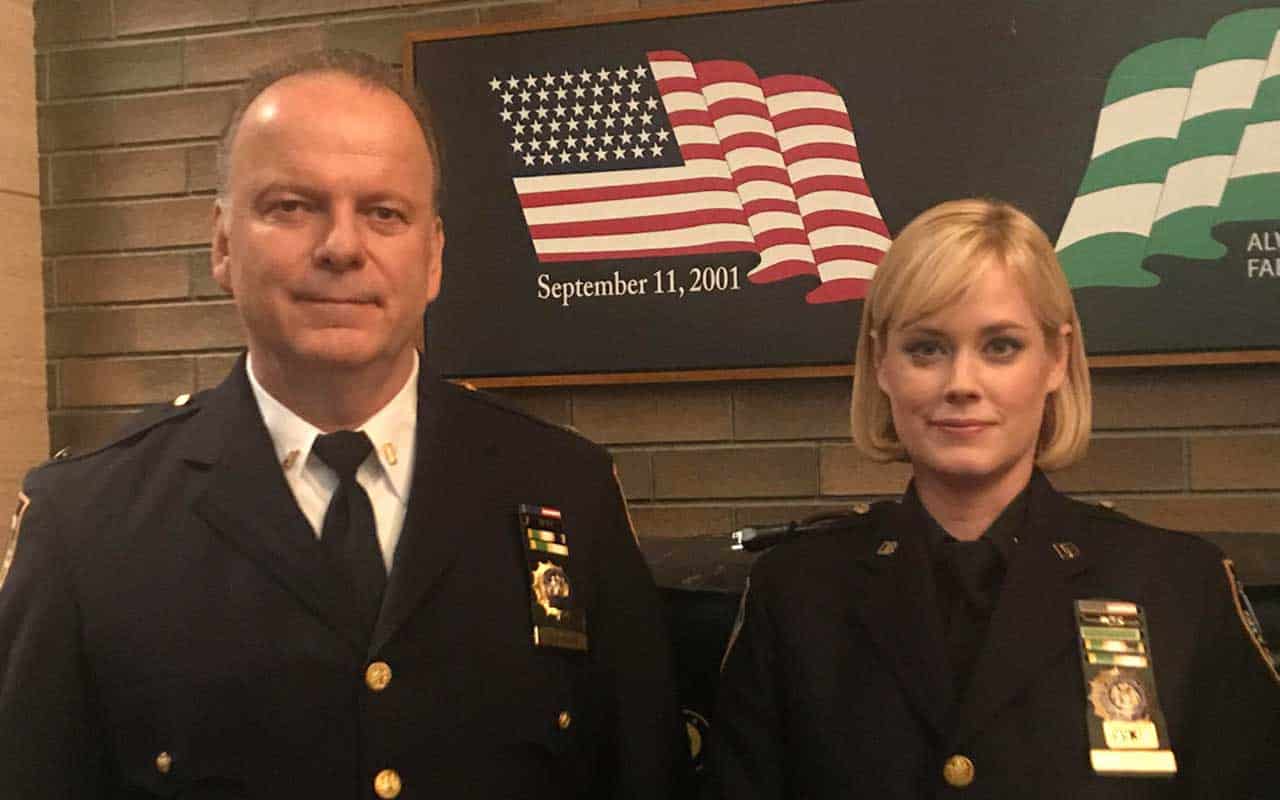