There is a freshness every time Allyn Burrows, artistic director of Shakespeare & Company takes to the stage in the crackling moments before the house lights dim, the actors move into place, and with a burst of stage wash, the play begins.

It is Burrows, after all, who welcomes the audience to one of the stages situated in the Berkshires in Lenox, MA, before most performances. He exudes energy, the sincerity of an artist at the peak of his career and a true believer in the ways in which theater changes moods and perceptions. He is often accompanied by his young daughter who has learned her father’s patter very well, and will often take some of the important lines about silencing cell phones or noting the position of the “exit” lights, apologizing that the signs are in Latin.

The journey that has led Burrows and his celebrated actor wife, Tamara Hickey and their daughter to Lenox began in Boston where Allyn was reared, the youngest of six children. “I went to Boston University and was really focused on the foreign service. I spent two years in France with that in mind.”

Along with his foreign service studies, Burrows had taken classes in acting for non-theater majors and found the pursuit rewarding. When a fork appeared in the road, “I spent 18 years in New York,” recalls the highly regarded actor and director. Along with a string of Off-Broadway theatrical credits among his television credits are appearances on the Law and Orderfranchise with feature film roles in The Company Men, Julie and Julia, and Manchester by the Sea on his lengthy resume.

But, there was always the theater.

The Bard in the Berkshires

Allyn Burrows first took to the Shakespeare & Company stage in the late 1980s, returning frequently to appear in various productions. He met Tamara when they were both appearing in summer presentations and, when his parents fell ill and Tamara had returned to Boston at the end of the season, he followed.

For seven years, Allyn was founder and artistic director of Actors’ Shakespeare Project in Boston. “We mounted productions in a variety of locations including the Basement of the Garage in Harvard Square, the Armory in Somerville, and the Cathedral of St. Paul,” he recalls with the justifiable pride of having created a theatrical company that continues to flourish.

One of the noted directors who responded to Burrow’s invitation to direct Actors’ Shakespeare Project productions was Tina Packer, herself a globally recognized director and the founding artistic director of Shakespeare & Company. When Packer announced her retirement from the Lenox, MA, company, it was time. Burrows applied for the position. Competing in a field of experienced creatives, he was offered the position and has, since 2016, served as artistic director … a position which has allowed him to both direct and act, while being the force behind the selection of plays, directors, and company members.

Shakespeare in a van

Shakespeare & Company is art and education. Among the widely acclaimed programs that are offered outside of the Lenox campus is the Northeast Regional Tour of Shakespeare. Allyn, himself, is a graduate of the perennial roadshow, telling The New York Times in a 2019 interview “It’s a grueling, long commitment – A boot camp for 17 weeks and one of the most challenging, most rewarding experiences I would ever have.”

The reach of the educational programs supported goes well beyond the Berkshires. This past winter, the company sent a director to Israel as a “teaching artist.” Burrows recalls that the experience was not only energizing for the company but carried off admirably, thanks to a brilliant translator and the resulting exchanges between teacher and pupil.

At this writing, the United States is in the clutches of the COVID-19 pandemic. Schools, stores, galleries, museums, and theaters are all shuttered, awaiting the “hoped for” future when the virus can be managed, then contained. The immediate future of the rich cultural performances that dot the landscape in the Litchfield Hills, the Hudson River Valley, and the Berkshires are very much in limbo. Will there be a season?

In a recent open letter to the community and the loyal subscribers and audiences who flock, summer on summer, to Shakespeare & Company, Allyn Burrows reached back into his deep understanding of the life and times of the Bard of Avon to offer both comfort and hope.

“Shakespeare saw the theatres closed two times in as many years due to the plague, and he subsequently must have viewed the world through the lens of what the epidemic wrought. Ultimately the theatres re-opened and history became the beneficiary of the brilliance that he brought to the stage for many years afterward. Think of how joyous it must have been to gather to enjoy his words brought to life. For now getting together will have to wait. There is serious business at hand to eradicate this scourge and we must all do our part by staying away from each other. What we can do is support each other from afar. We will have information on our upcoming plans for this season for you very soon, and so for now, take care of yourselves. We’re thinking of you. – Allyn”

The labyrinth of love

The invitation is not hollow, by any means. The announced 2020 season was dotted with brilliant plays, esteemed actors, and the prospect of performance after performance that would challenge, elevate, and expand the experiences of the audiences Allyn Burrows would so energetically welcome.

Burrows expends great thought and imagination in arriving at a theme for each Shakespeare & Company season. The 43rd season, originally set to begin in late May was dubbed The Labyrinth of Love. In Burrows’ words, “the season is not a reaction to the current environment, but a reflection of it.”

Though articulated months ago, the evaluation is most prophetic. Whether the great mosaic of theatrical productions that wait behind each turn and barrier of that labyrinth come to life in 2020 or must wait for a following season remains to be seen. Allyn Burrows approaches that reality with a steadfast faith in human potential wrapped in the deeply human sensation of love.

“I’m hopeful for humanity. I’m not ruling out setbacks, but I’m hopeful that somehow we’re going to bridge our divides.”

Up-to-date information about the 2020 season of Shakespeare & Company, the modifications that may be needed to accommodate the current national crisis and, thankfully, insights from artistic director Allyn Burrows can be found at Shakespeare.org. 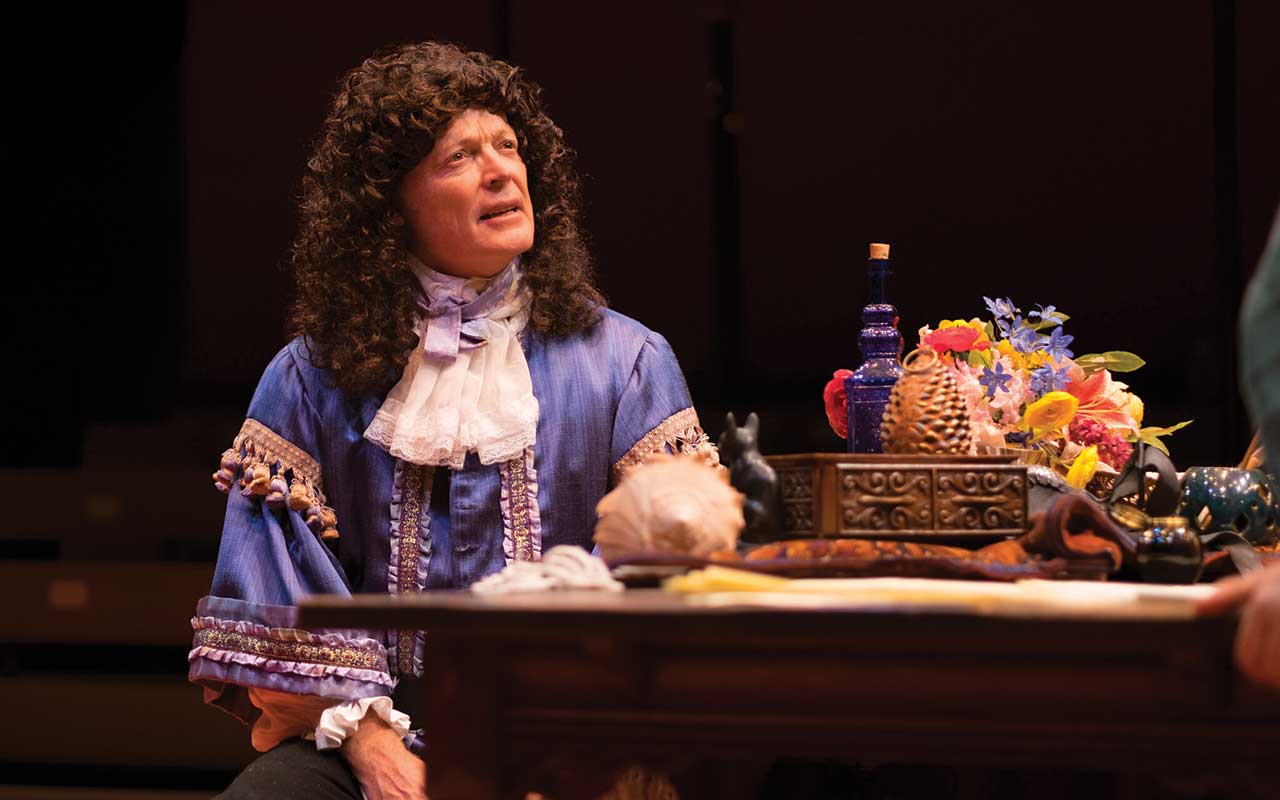