In honor of our “history” themed issue that you are currently reading, we opted to give a nod to an artist who not only resided in our area and worked here, but who has since passed – a first for us in this artist profile feature. CB had his selection of talented artists to choose from with so many artists having called our area home throughout the centuries. His choice was Daniel Chester French whose work we have (probably) all seen.

The name may not be familiar, but images of his work are etched deeply into our national consciousness. Daniel Chester French, an American sculptor who died in 1931, was a longtime resident of the Berkshires, having established both his summer home and his studio at Chesterwood in Stockbridge, MA – a few miles north of Great Barrington. It was there in his studio that French created the model that would become the Lincoln Memorial in Washington, DC.

The four year project to turn model into masterpiece was intensely supervised by French. Six brothers, the Piccirillis, accomplished the construction which they carved from Georgia white marble in 28 pieces, shipped to Washington and assembled on site. Over the years of his career, French would often reunite with the family to execute his sculptural designs.

Placed at one end of the National Mall, Lincoln’s seated figure seems to look across the huge reflecting pool, past the memorials recognizing the nation’s engagement in World War II, the Vietnam War, and the Korean War, the Franklin Delano Roosevelt Memorial, the nearby Martin Luther King, Jr. Memorial, the giant obelisk memorializing George Washington, all the way to the Capitol Building.  Every year, in every season, thousands of visitors to the Capitol climb the steps of the Lincoln Memorial to stand in awe of French’s imposing figure.

Success from the beginning 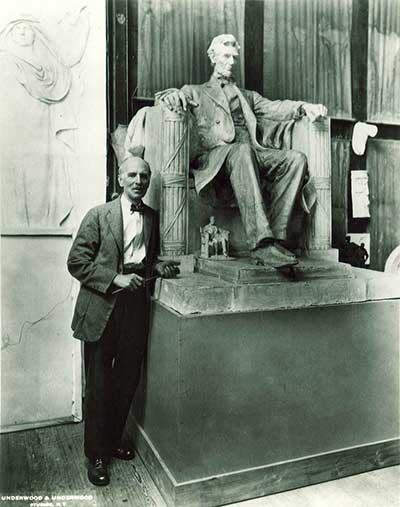 Lincoln was not his only contribution to the celebration of American history.  It was, in fact, French’s first major work that brought him recognition and was the foundation for his career. Because of family connections in the town of Concord, MA, French was the only sculptor to be considered by a panel of revered town elders, including Ralph Waldo Emerson. The project was to create a monument commemorating the beginning of the American Revolutionary War. The Concord Minute Man statue sits across the North Bridge over the Concord River and memorializes the Battle of Concord. Unveiled in April, 1875 during the centennial celebration of that battle, it was positively received by critics, though French was not on hand to accept their applause. He had traveled to France to pursue his training and avoid the embarrassment of criticism should his work be not well received.

What followed the completion of the Minute Man was a career that created lasting monuments to both individuals and philosophical concepts and aspirations. John Harvard, his 1884 statue looks over Harvard Yard in Cambridge, MA. The Statue of the Republic, created as the centerpiece of the Chicago Columbian Exposition can still be admired in a somewhat reduced version (24 feet tall) in that city. The George Robert White Memorial resides in Boston’s Public Garden, the imposing bronze doors of the Boston Public Library not far away, and his Four Continents are at the Alexander Hamilton US Custom House in New York.

A childhood of privilege

Daniel Chester French was born in Exeter, NH, where his father was the state’s chief justice. A respected legal mind, French’s father also served as Assistant US Treasury Secretary and was an author. In 1867, the family moved to Concord, MA, where they became friends with Ralph Waldo Emerson and the Alcott family. It was May Alcott, sister of Louisa May Alcott who was credited with encouraging Daniel to pursue sculpting. French attended Massachusetts Institute of Technology (MIT) but did not graduate, choosing, instead, to travel to Florence, Italy, to study sculpture.

With the critical acclaim surrounding the Minute Man, French established his own studio – located, first, in Washington, DC, then later Boston and New York. As his reputation and career ascended, French maintained a home in New York City, and in 1896, purchased the farm of Marshall Warner of Stockbridge, MA. The 150-acre estate would become the summer home for the French family and the primary studio where he created the designs and models for pieces done as commissions as well as pieces done as his own creative expression.

The 1820 farm house that had been situated on the property was replaced in project that began in 1901. French had met and become friends with noted architect Henry Bacon, who he asked to design both the main house and a studio. It was Bacon with whom French collaborated in the triumphant development of the Lincoln Memorial. Bacon’s own career is represented in structures throughout the country including the Naugatuck, CT, train station, Waterbury Hospital, and the World War I Memorial at Yale University in New Haven.

Throughout the years, Chesterwood has undergone renovation, now under the auspices of the owners of the property, the National Trust for Historic Preservation. Declared a National Historic Landmark in 1965, the property is also listed on the National Register of Historic Places.

Admission to and tours of Chesterwood are offered through October  24. It is open five days a week, closed on Tuesdays and Wednesdays. Tickets to visit the house, the studio, the art collections and the grounds can be obtained on line at www.chesterwood.org. The address is 4 Williamsville Road, Stockbridge, MA.

While the world thinks of Lincoln and the Minute Man and Chesterwood when focusing on the legacy of Daniel Chester French, there is another fine example of his contribution to life in the area. In 1928, French was one of four area dignitaries who came together to form Three Arts Society. The focus of their partnership was to disassemble a casino that once stood on the eastern part of Main Street in Stockbridge, have it carried by horse-drawn wagon to the bottom of Yale Hill and reassembled, adding a stage and seating. Introducing the Berkshire Playhouse, thanks, in part, to Mr. French.

The newly refashioned theater opened in 1928. When the depression caused Pittsfield’s Colonial Theatre to close, it was French, again, who joined with several of the other Three Arts Society board members to keep that organization going and were able to mount a 1935 season that starred none other than the great Ethel Barrymore.

As Berkshire Theatre Group, created with the merger of Berkshire Theatre Festival and The Colonial Theatre moves proudly toward its centennial of blended operation, the legacy of French’s commitment to the area lives on. 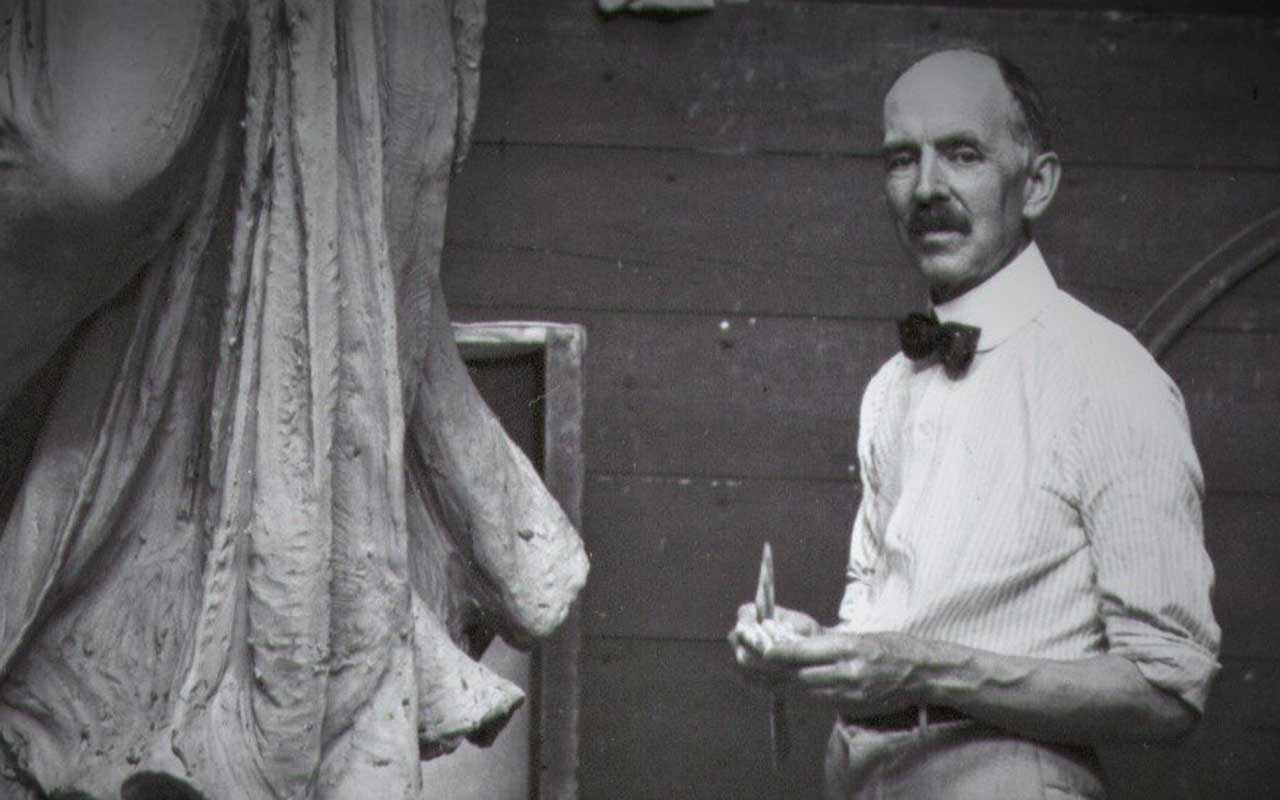