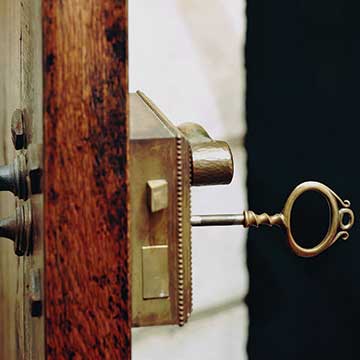 Fletcher: I moved here when I was six with my family. I still live on the same property where I was raised, now named Coddington Lane for my parents who put in the road. My father had previously been an estate manager and then opened his own business, a feed store in Clinton Corners. My mother realized early on that I was having trouble in school, and instead encouraged my creative talents. As it turned out, I’m dyslexic, and this was before dyslexia was understood. My mother had me focus on mechanics, building and fixing things by the time I was in third grade.

I was sent to a Waldorf school in New Hampshire and then studied sculpture and painting at Silvermine College of Art. After finishing my associate’s degree I went to Hobart Welding School for a year. After that I taught welding and began my business, Arrowsmith. Back then there were very few blacksmiths around and there was no internet, so when I wanted to learn blacksmithing I taught myself from books. I worked in Millbrook as a silversmith, sculptor, welder, and blacksmith, making many of my own tools. This eventually led to going to blacksmithing conferences and meeting Debra.

Debra: I grew up in the Bronx in a Jewish left wing neighborhood and went to Music and Art High School (now part of The LaGuardia High School of Music & Art and Performing Arts). My uncle Jimmy was a dental technician and a second dad. He taught me how to make jewelry and I also took courses at Hunter College. Though I had many studios in NYC, my first was courtesy of the generosity of Uncle Jimmy who shared his Union Square space with me.

By the time I was 17 I was making talismans and silver jewelry that I sold in stores like Bendel, Bloomingdales, and Cartier. By 22 I was divorced from my first husband and at 26 I started traveling. After cooking on sailboats in the Caribbean, I moved to Bozeman, Montana, to stay with my sister. I planned to study blacksmithing in Bozeman but had a previous commitment with a Vermont blacksmith and went to a blacksmithing conference in Purchase, NY, where I met Fletcher.

Being a kid from the Bronx I didn’t believe his name was really Fletcher Coddington, which sounded like someone out of Jane Austin so he showed me his driver’s license to prove it. Obviously it’s his real name. We’re kind of like Annie Hall in reverse.

Fletcher began Arrowsmith in 1969. After I completed my commitment in Vermont I joined Fletcher in Millbrook. We began working together on what’s now Coddington Lane. We did whatever work came in our driveway encompassing many types of custom metal and worked in materials from silver to steel. There were a lot of horse-drawn carriages in Millbrook that needed restoration in those days and local estates, like Wethersfield, whose owners understood craftsmanship. So they kept us busy.

Can you describe this business? How did you get started?

Fletcher & Debra: Our business has changed enormously. Though Arrowsmith began as a two-person custom shop, by the 80s and 90s we had 25 employees and we made home accessories, furniture, and lighting for high-end, luxury American companies like Brunschwig & Fils, Waterworks, and Pierre Deux. We moved into production because Fletcher was exhausted by the learning curve of custom iron; he thought we’d do better as a production forge. Debra knocked on doors of stores and design centers all over New York and we advertised in trade magazines. Arrowsmith could make whatever clients wanted – furniture, chandeliers, hinges – anything metal. Our lines of limited, high-end production took off.

When NAFTA passed, our clients started moving their production to Mexico, and eventually to China. Everyone wanted less expensive products. We were still busy but customers became less interested in heirloom-quality pieces and more focused on price.

Then the 2008 great recession came along. It was the nail in the production business’ coffin. We weren’t nimble enough. We didn’t respond quickly enough and just couldn’t handle laying off our employees – many of whom had been with us for over 15 years. We didn’t assess and reorganize and were forced to take out loans to keep going. We survived by the skin of our teeth. Our workers found other jobs and we returned to where we began, custom ironwork. As Fletch knew, unlike production with custom work, every project is different. You have to figure out how to create each piece individually. The learning curve is indeed steep.

Your lives were altered by tragedy when your son drowned in a Hudson River canoe accident the night before his wedding. How do you cope with that?

Debra: Losing our son Baylin shattered our lives. We lost him on December 21, 2012 to hypothermia and drowning. He was celebrating at his bachelor party on the Hudson River when he was convinced to take a short jaunt in a canoe. A storm came up suddenly, tipping the canoe. Baylin and his friend Barrett Raymond died together in the river that night, fourteen hours before he was to be married.

After shocking, sudden, out-of-turn tragedy you can barely breathe much less think about running a business. Catastrophic loss rips your heart out. Despite simplistic platitudes that abound, though time changes how loss affects you, it doesn’t get “better” nor do you move “through” it. It’s a long slog back to learn how to move forward in life.

Baylin was an ethno botanist and a classically trained clarinetist who travelled in Vietnam. He worked on farms and gardens and in jazz bands. He was kind, funny, beautiful, and free spirited – never boring. We will be figuring out our way without him for the rest of our lives.

I have always been a closet writer and when Baylin died I fell headfirst into my laptop. I write about my son, and I write about loss; discussing what I’ve learned about the wrongheaded cultural paradigm that surrounds grief. I also try to be available to anyone, newer to this impossible path who thinks I might be able to offer some assistance, no matter how small, just as mothers, present for my early grief, leaned in to help me.

It’s really not possible to understand how ferociously relentless grief is until it’s yours to hold. I’ve gradually come to realize (and Fletcher knew this sooner than I did) that our work is a helpful distraction and provides relief. Grievers often comment on how their address books change after loss, and it’s true. But the people who surrounded us at our workspace have been life saving. We cannot over-state how much their kindness has helped us through the past five-plus years. Baylin always knew that what matters most in life is connection, and when your heart is shattered, that’s often the only thing to offer solace. Our co-workers at Arrowsmith were supportive and kind. They implicitly understood connection and acted on it.

Because so very much of what we’d expected for our future left with Baylin, we’ve spent the last five and a half years reassessing and reorganizing our lives. We try not to over plan, but expect this process will continue.

There’s a For Sale sign in front. What are your plans now?

Debra: Actually that sign has to come down. We are gradually turning this facility into a building of makers and an entrepreneurial design center. Maybe down the road it will even house a gallery to showcase the work of our building’s makers. Millbrook Auction Center, a new business, just moved in. We have several artists who are renting studio spaces including Gregg Cimms, a talented blade smith who makes custom chef’s knives and Damascus blades; Brandt Junceau, who creates bronze sculpture; and Sharon Bates, a conceptual artist/sculptor.

The concept is to utilize the entire 27,000 square foot building to house studios for sculptors, painters, artisans, and the local creative community. Jimmy Crisp, the architect, has his offices in the front 1,500 square feet. We have gradually realized that we have a valuable resource for the creative community, the artists, and ourselves. We really ought to take down that For Sale sign out front.

In October we plan to open a pop-up, Arrowsmith at Arrowsmith. It’ll be open Fridays through Mondays, in time for the holidays, to let people know we’re back. Hopefully the pop-up will rekindle the unusual retail and design experience we’ve always provided at Arrowsmith. •