Art Captured Through the Lens 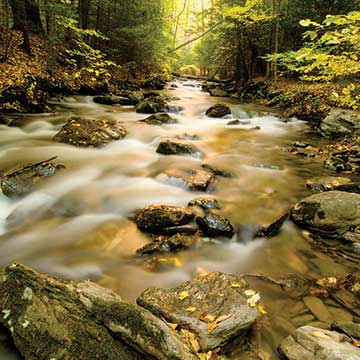 Joseph Meehan’s moment of clarity may have come in the cold light of an early Arctic morning. There was a rattling at the front of his tent. Not a knock, since it is very difficult to “knock” on a tent …. but a rattling that shook the entire structure. Meehan could see the light outside and wondered why his guide, Leonard, was disturbing him at this early hour.

Then came the realization. Leonard, his wife and child were likely sound asleep in their tent, set several yards away. The early morning visitor was not, after all, a human. It was a polar bear. Correction. It was a HUGE polar bear.

Used to shooting brilliant photographs, Joseph Meehan realized at that moment, that the shooting required might well be the kind accomplished with a rifle, one of which was just outside his sleeping bag.

There was only one problem. The zipper in his bag was stuck. A world traveler who had been in many an awkward situation in his career, the malfunction of a sleeping bag zipper was a new experience and one that Joseph did not welcome.

Fate, however, intervened. As the pesky zipper finally became untangled, the shaking of the tent subsided. Carefully… quietly … gingerly removing himself from the bag, rifle at the ready, Jospeh Meehan decided to greet the day by slowly lowering the tent zipper and peeking outside. When he did, there, loping across the Arctic tundra on the shores of Lancaster Sound, was at the frustrated polar bear.

Invitation in the dentist’s chair

Joseph Meehan has taught photography and specific photographic techniques around the world. He has authored a collection of books on the specific techniques he has developed and employed over the decades of his celebrated career. He has enjoyed living and teaching in London, New York as well as in Taiwan. Camping out on the rocky banks of an Arctic inlet was a world apart.

The fascination that had brought him so far above the Arctic Circle was the opportunity to work with Sharon, CT, dentist, explorer, and, as Joseph describes him “Renaissance Man,” Dr. Martin Nweeia. In a casual conversation during a dental visit, Nweeia had waxed eloquent about his years long study of the Narwhal – that intriguing Arctic whale distinguished by the long “tusk” protruding from the center of its head. The tusk, it turns out, is really a tooth – and therein lies the fascination Dr. Nweeia has with this most curious animal.

The invitation to accompany Dr. Nweeia to the distant regions of Nonavut, Canada – north of the Arctic Circle at the very tip of Baffin Island – was so intriguing that Meehan eventually made multiple trips to photograph both the environment and the Inuit people who were his hosts. He also managed to venture over to Greenland, pursuing his photography odyssey. (We featured the story about Meehan and Nweeia’s adventure in our June 2018 issue).

When Dr. Nweeia’s work was featured at a recent exhibition at the Smithsonian’s Natural History Museum, it was brilliantly illustrated with Meehan’s photography.

From academia to photographic celebrity

Born in New York City, Joseph Meehan recalls that his father “had a very good eye,” something that he inherited and has used to astonishing effect. Graduating from Columbia and Manhattan College, Jospeh pursued a teaching career, focused on psychology and the social sciences. But, photography soon emerged as both a passion and a profession.

“I started shooting in larger formats – five by seven and four by five,” recalls Meehan. “I focused on application of the ‘zone system,’” a technique that measured the variations of light in a subject and managed exposures and focal length to match. When he took his film into the laboratory to develop and print, he applied his learning to create pieces that were true photographic art.
“I was fortunate to get assignments from major magazines in New York,” he recalls, “and was invited to become the technical editor of Photo District News.” The prestigious publication, now available online, is a primary communication link for professional photographers around the world and sponsors some of the most prestigious annual photographic competitions.

Everyone is a photographer

With a touch of sadness, Meehan observes the proliferation of “camera phones” that have encouraged millions of shots to be taken every day. “It seems that photography is no longer a specialty,” he observes. Ubiquitous as parents memorializing their toddler’s every step or strangely obsessed diners taking endless pictures of the plates in front of them at local eateries, simply looking at Meehan’s brilliant work speaks in opposition to his lament. There are very few photographers who can create the striking clarity, color, and dramatic imagery of a Joseph Meehan photograph.

When an accidental fall left Meehan not only in need of hospitalization but extended rehabilitation, he spent time at Noble Horizons, the Salisbury, CT, rehabilitation center nearby his home on Twin Lakes. “The people there were wonderful,” says Joseph, “and I wanted to thank them the best way I know how.” A series of his most vibrant landscape prints have been framed and now appear on the walls throughout Noble Horizons.

Not truly “retired,” Meehan donates his time and consummate skills to local schools, fire and rescue companies, and other non-profit organizations, recording athletic contests, celebrations and annual landmarks. It was not without a bit of irony that the rescue team that answered the call when his fall left him incapacitated and in need of immediate attention was staffed by a number of volunteers who had recently been the subject of one of Joseph’s photo sessions. “Hey, Joe …. what happened?” was a reassuring greeting to an injured and somewhat shocked Joseph Meehan.

His images of competitions at Salisbury School form a lasting reminder of the exploits of the young men who don the jerseys in various sports and provide glimpse back at history as classes graduate and careers begin.

While working at the Photo District News and photographing individuals for biographic profiles in the publication, Meehan had the opportunity to meet and “shoot” many of the greatest photographic artists in the peak of their careers.

One assignment sent him to get a portrait of none other than Annie Liebovitz, the renowned portrait photographer who captured iconic images for Rolling Stone, Vanity Fair and countless other magazines. When Liebovitz agreed to the portrait sitting, she suggested a transaction as part of the date. “She gave me one of her magnificent books, autographed,” recalls Meehan. “In return, she wanted a copy of my book Panoramic Photography. I was honored. That was quite a trade.”

A true appreciation of Meehan’s work is best nurtured by visiting his website and casually rolling through the albums posted there. Special note of his treatment of landscapes is in order, as he has managed to so clearly employ his valued “zone method” in mastering how light and shadow, distance and detail all impact the finished photograph.

And, for those who may revel in the candid iPhone “snap,” but long to satisfy the craving to truly memorialize a moment of mist on the Housatonic River, the sweeping colors atop Mt. Riga in the fall, the poetic flight of birds high in the Berkshires, there are over 20 books created by Joseph Meehan to guide you on your way.

Are you an artist and interested in being featured in Main Street Magazine? Send a brief bio, artist’s statement, and a link to your work to info@mainstreetmag.com.