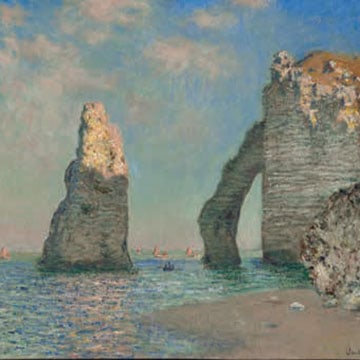 After saying goodbye to winter, we are all eager to embrace the balmier days ahead. With the summer season approaching, it’s an ideal time to go for a country drive. The Clark Institute and MASS MoCA, which are both located in The Berkshires area of Massachusetts, offer extensive collections of art to suit every preference.

Beyond the tree-dotted rolling landscape of Williamstown, MA, is the Clark Art Institute, which houses a permanent collection of more than 9,000 works of art. Inside, art devotees will uncover European and American paintings and sculpture, master prints and drawings, English silver, and early photography.

The Clark also boasts one of the world’s most significant collections of Winslow Homer as well as works by John Singer Sargent, George Inness, and Frederic Remington. Its vast collection is especially rich in French Impressionist and Academic paintings, and British oil sketches. It also includes decorative arts from the Renaissance to the early twentieth century.

Founded by Robert Sterling and Francine Clark, the Clark is the repository for the late couple’s personal art collection. Robert, who was known by his middle name Sterling, was an heir to the Singer Sewing Machine Company fortune.

His interest in collecting art can be traced back to 1910. After a distinguished career in the United States Army, Sterling settled in Paris and began amassing art – an interest he may have inherited from his parents. In 1919, he married actress Francine Clark and they shared dual residences in New York and Paris. Throughout the years, they continued to collect.

After decades of collecting, the couple yearned to create a permanent, public home for their works. The Williamstown area held appeal since Sterling’s family had roots at Williams College. After signing the institute’s charter in 1950, the doors to the Clark opened in 1955.

Beyond the Clark’s impressive art collection, special events, lectures, films, and performing arts, it invites museum guests and the public to enjoy the picturesque beauty that surrounds its Berkshires location.

One of the distinctive aspects of the Clark experience is how it has successfully managed to merge an art museum, public park, and center for academic research. Its campus sprawls over 140 acres. People are lured by the scenic meadows, woodlands, and walking trails, which are widely used for picnicking, hiking, and other outdoors activities.

In 2014, a newly designed 42,600-square-foot Clark Center was unveiled, bringing added gallery space. It was designed by Tadao Ando – the Pritzker Prize-winning architect who is at the helm of the Japanese firm that bears his name.

In 2016, the Clark completed its multi-year expansion and renovation, which also included a redesign of the grounds by Reed Hilderbrand Landscape Architecture. Serenity abounds at the three-tiered reflecting pool that spans one acre.

Highlights of the collection include more than 30 paintings by Pierre-Auguste Renoir. “Renoir was one of Sterling’s favorite artists. The Clarks owned more paintings by Renoir than from any other artist,” says Sally Morse Majewski, ,anager of public relations and marketing at the Clark Art Institute. The collection includes two self-portraits, which are very different in style.

The Clark’s Four Seasons Room offers a view of Renoir’s Venus Victorious sculpture with the reflecting pool just beyond it. When the museum was being built, the Clarks had an apartment on site and often had breakfast in this space.

“Homer was another of Sterling’s favorite artists and he collected him in depth and with a very discerning eye,” says Morse Majewski.

Throughout the years, the Clark’s collection has expanded through numerous acquisitions as well as significant gifts and bequests, including the 2007 gift of the Manton Collection of British Art. It added significant holdings of British art, including paintings, oil sketches, watercolors, and works on paper by J.M.W. Turner, John Constable, and Thomas Gainsborough.

The Clark’s upcoming summer exhibition program includes Women Artists in Paris, 1850–1900, which will be on view from June 9 through September 3. In alignment with today’s mission for a more egalitarian world, the exhibit examines a key chapter in art history.

At the time, many women traveled to Paris to further their training and bolster their careers. Despite the city’s many professional opportunities, gender norms remained conservative. Since women weren’t permitted to attend the esteemed École des Beaux-Arts, they sought out alternative venues and opportunities. The exhibition presents works by Berthe Morisot, Mary Cassatt, and Rosa Bonheur as well as Anna Ancher, Lilla Cabot Perry, and Paula Modersohn-Becker.

From June 9 through September 16, The Art of Iron: Objects from the Musée Le Secq des Tournelles, Rouen, Normandy will be on view. Celebrating the beauty and craftsmanship of wrought iron, it will present 36 objects that were salvaged by the founders of the Musée Le Secq. At the time, wrought iron was being discarded and replaced with modern materials. The exhibition will showcase signs from shops, inns, and cabarets; architectural grilles; gates and balcony railings; and beyond. For more information and to view the schedule of events, visit www.clarkart.edu.

The history of MASS MoCA’s site spans more than 200 years of economic, industrial, and architectural development, tracing the trajectory of industrialism in New
England. The 16 acres of grounds encompass a vast complex of 19th-century factory buildings. Listed in the National Register of Historic Places, the site’s 27
buildings form an elaborate system of interlocking courtyards and passageways, rich with historical association. Bridges, viaducts, elevated walkways, and red brick facades lend a distinct architectural ambiance.

“Our 26 former factory buildings house nearly 4 miles-worth of art, which expands infinitely when you step into one of James Turrell’s light installations, Laurie Anderson’s virtual realities, or Sol LeWitt’s maze of wall drawings,” says Jasper Nash, who hails from the communications department at MASS MoCA.
On view is James Turrell’s Into The Light, a major long-term exhibition (at least through 2019) of nine immersive light and space environments, which includes a dramatically scaled, perception-altering Ganzfeld and a major work from each decade of the artist’s career.

Art devotees can also explore Laurie Anderson’s exhibition, also on view at least through 2019. The multimedia artist and performer utilizes the facility to create and show new work, as well as exhibit archival video and audio material.

On view through 2033 is Sol LeWitt, A Wall Drawing Retrospective, which features 105 large-scale wall drawings that occupy interior walls in a light-filled mill building at the center of campus.

“Year-round performances round-out the experience with big music, theater, comedy, dance, and film, shaking our campus 45 weekends a year. With the lively gathering of neighboring cultural institutions, restaurants, bars, and mountains, this little corner of the world has it all,” concludes MASS MoCA’s Nash. For general information, visit www.massmoca.org; for information on events, www.massmoca.org/performances.

The Berkshires area is also home to other museum venues and performing arts organizations including Tanglewood’s live music venue, Jacob’s
Pillow’s international dance festival, and the Williamstown Theatre Festival. While visiting the area, day trippers or weekenders may also want to visit Williams College Museum of Art and Bennington Museum. The Clark offers a series of combination tickets, visit www.clarkart.edu/visit/hours (on the page, look under the Specials section). •