Artist Mary Belliveau has spent the last few decades globe-trotting to destinations around the world. She arrived behind her easel for a professional career as an artist later in life, after raising her children and enjoying a career in healthcare. “I’ve always been curious. My father was a traveler,” said artist Mary Belliveau.

Her work will be on display from December 10, 2022, through January 8, 2023, at Art Gallery 71 In Rhinebeck, NY – the artist-owned and operated cooperative that is host to 23 area artists who share in the gallery expenses and management. The artists rotate and eventually each one has an opportunity to shine as the featured artist. A member of the gallery for several years, Belliveau celebrates her opening on Saturday, December 10, from 4pm to 6pm.

Rather than seeking to make a profit, revenue generated from Art Gallery 71 is reinvested and becomes surplus income that gets funneled back into the gallery operation. Commissions are not imposed; rather full sale proceeds are retained by the selling artist.

“I am displaying my series taken from the Old and New Testaments of the Bible – a book whose people I fashion to tell their unique stories,” said Belliveau. She found inspiration for this series through a recent visit to Edinburgh and its National Galleries of Scotland, which was resplendent with works created by the Renaissance painters. 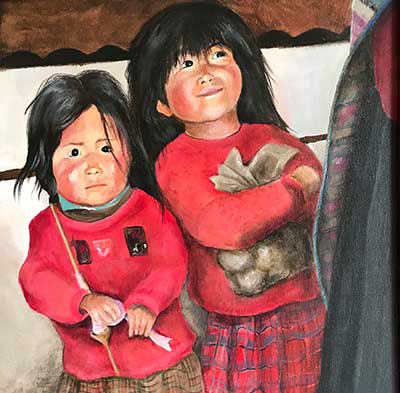 Through her journeys to 19 countries, Belliveau has encountered a diverse range of people who hail from all walks of life – from shamans to farmers and their wives, and children.

The talented artist gravitates toward subjects of people and animals. She enjoys painting the people she’s encountered on her many trips abroad. Belliveau strives to capture the expressions on their faces as well as the lifestyles of the locals she’s met along her travels.

Drawn to patterns and colors, Belliveau has also taken interest in the traditional attire that people don as they go about their daily routines in their home countries.

She has found each country she has been to, to be unique and interesting. “The most colorful has been Peru with the beautiful natural dyes of the clothing and the skillful weaving by the women. The countries in East Africa, though many are impoverished, their music, the colorful patterns in their clothing, and their display of genuine joy will stay with me forever,” said Belliveau.

A palette of vibrant colors and lively patterns are found in many of her works. Some of her paintings capture the busy, plaid prints that embellish the skirts of a duo of young girls in Peru while other works portray floral motifs, or the cascading robe of a man in The Prodigal’s Father.

Ever since she can recall, Belliveau was drawn to bright colors and rich, textured patterns, like the ones featured in her artwork. She has early memories of times spent experimenting, creating art while scribbling, and learning how to remain within the lines when drawing and coloring when she was in kindergarten.

“A box of crayons was a delight for me as was my first oil paint set that my mother gave me when I was nine years old,” said Belliveau.

Since drawing and painting have always been a focus, Belliveau went on to study art education at SUNY Buffalo State College in New York. However, it wasn’t until much later in life that she began working behind the easel and showing her work through gallery shows.

Before immersing herself in an art career, Belliveau was busy living a rich, prolific life. Her long list of achievements includes raising five children, earning a nursing degree, and penning articles such as Our Lost Legacy for Journal of Gerontological Social Work, and letters to the editors of many local newspapers.

Belliveau also co-authored Riches Under Your Roof – How to make your home worth thousands more (Holt, Rinehart and Winston; First Edition (1983) with James Belliveau.

She’s also delved into other interesting business ventures, which relate to visual, creative industries. Among them was work with Bonnie Cloths – unique tablecloths that brought a splash of color and a ton of style to special events such as weddings, galas, and beyond. What Belliveau enjoyed most was all the colors, patterns, textures, and laces. Although the company has ceased operation, the artist recalls how much she enjoyed engaging with those exquisite fabrics. “That was the highlight,” she added.

After raising her children, Belliveau had the freedom to jet-set to faraway destinations such as Peru, Israel, and Africa, as well as mission trips to the Dominican Republic and Guatemala. At that point, she had the resources and family support to travel. Her trips always served as a source of inspiration for her work.

Belliveau enjoys painting artwork that carries messages about the diversity of people and places around the world and how unique each one is. One of her paintings captures the innocent look of a Peruvian shaman’s daughter while another features a guinea pig farmer’s wife. A proud Maasai and his camel were the subject of yet another painting she created.

“Through my travels, I work to depict the qualities of the people and understand their cultures. My trip to both Peru and Africa has been with Heifer International, a non-government organization (NGO) that gives animals and training to impoverished people around the world. The colors and patterns of clothing worn by those in both countries and their facial expressions inspired me to paint portraits to share the beauty I found there, both in the people and in the animals native to their lands,” said Belliveau.

More on Heifer International – the organization works to eradicate poverty and hunger through sustainable, values-based holistic community development. It works in 21 countries around the world, alongside local farmers and business owners. The organization supports farmers and their communities as they mobilize and envision their futures. It also provides training so they can improve the quantity and quality of the goods they produce and makes connections to market it to increase sales and incomes.

Belliveau also found the geography of Israel to be of particular interest, as well as the people of The Holy Land. The religions of Judaism and Christianity were very inspirational and inspired Belliveau to paint the current series on display at Art Gallery 71.

Beyond people, Belliveau also has a love of animals. “Animals are beautiful. The created world is special and worthy of being acknowledged in my work,” said the artist. She utilizes a variety of mediums in her works, depending on which one she feels best expresses the subject matter she is working with.

“I used to work in oils and have done some printmaking and batik but have landed in realism. I use watercolor and acrylics. I love layering and I work quickly, capturing the flow of thought as I work my images, often of people or animals. My camera also becomes a useful tool. I often work from photos taken on my travels,” she added.

Through realism, Belliveau strives to offer a glimpse of “captured beauty or troubling current or past events that invite reflection.”

Belliveau has been featured in solo shows at local venues such as the Town of Esopus Library in Port Ewen and Studio KTM in Red Hook, NY, to name a few. The artist’s most widely seen work was a commission created for the Eastern Mennonite Seminary in Virginia.

That work, Preparing to Serve, currently greets people from its home in the seminary’s entrance hall. Beyond having work on display stateside, Belliveau’s artwork embellished a kitchen wall in New Zealand. Another work brought color and ambiance to a stylish restaurant in New York, and of course Belliveau’s artwork prominently hangs in the homes and offices of her children who are scattered around the country.

As for artists Belliveau admires, they include the painters of the Renaissance, specifically Albrecht Durer, El Greco, Raphael, Titian, and Leonardo da Vinci. She also appreciates and many contemporary realists such as Ali Cavanaugh, Jeremy Lipking, Mario Robinson, and Andrew Wyeth, among others.

Plans for the artist hopefully include more travel to places she hasn’t visited before as well as more opportunities to paint and share glimpses of the world with others.

“I am blessed with a very supporting family who encourage me and who critiques my work when I place my unfinished paintings on the dining room table,” concludes Belliveau.

Art Gallery 71 is open every Friday through Saturday, from noon to 6pm. On Sundays and holidays that are observed on Mondays, the gallery is open from 10am to 4pm. It is also open by appointment “or chance.” 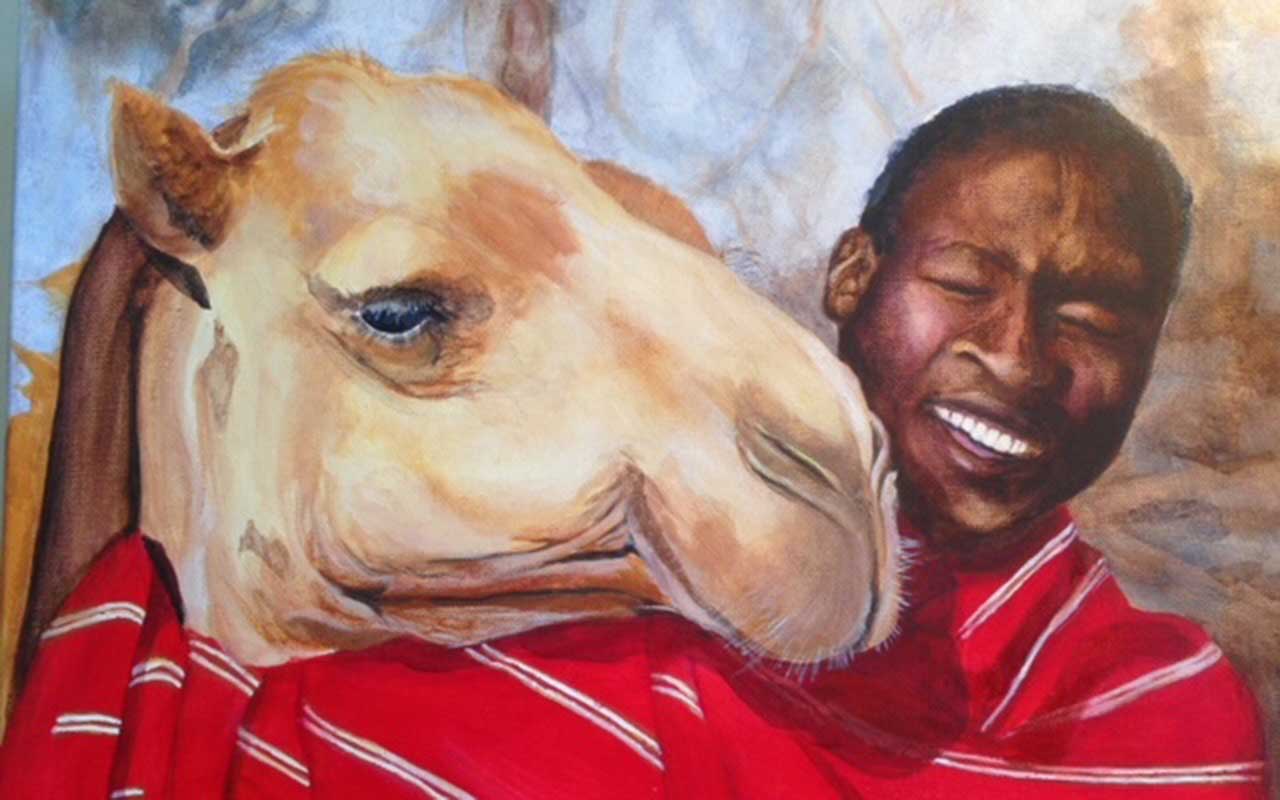