Over the course of the next month, residents of the Harlem Valley, will be able to see something glowing steadily in the dark at the Wassaic Project in Amenia, NY. “It could be a shooting star. It could be a waterfall” according to a recent press release. The Wassaic Project is pleased to present All is Not Lost, a site-specific, six-story video projection on the exterior tower of the historic Maxon Mills grain mill, created by California artist Christy Chan. Chan is a Northern California-based artist and filmmaker who creates large-scale outdoor video projections and exhibitions for municipalities and cultural institutions throughout the United States. She is the creator of Inside Out, a public art program which projected autobiographical statements by under-represented citizens on government walls.

The waterfall is not flowing downwards, but slowly creeping backwards at 1/200th the normal speed of a waterfall responding to gravity. 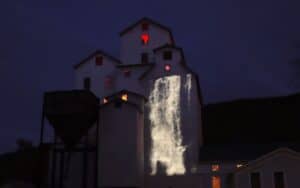 Viewers say watching the work is to step briefly out of reality. In a time when indoor arts and culture isn’t safely available, All is Not Lost is a public art exhibition that can be experienced communally and meaningfully from a social distance. The scale of All is Not Lost, in fact, rewards encounters from infinite viewing points and distances — whether people are approaching by foot, car or train. Artist Christy Chan began the project soon after the 2017 presidential inauguration, during what she felt was a period of looming uncertainty. Of the work, she says “All is Not Lost is meant to offer a moment of pause on the uncertainty of the times we live in, and our very human but futile attempts to hold on to memories and experiences. Moreover, water is traditionally a symbol of renewal and rebirth. The desire to be near it during difficult times is part of human nature.”

Though All is Not Lost was planned before the pandemic occurred, the presentation of art works such as this reflects a larger shift in American culture to accessible, outdoor art. From California to New York, outdoor projection-based projects are popping up to give the public a chance to experience culture and contemporary art. All is not Lost was funded by the New York State Council on the Arts. “Art is essential during times of chaos,” says Wassaic Project’s co-founder Eve Biddle. “We happen to have iconic architecture here, and we happen to be an arts center, but any town that has giant walls has the potential to activate its walls and provide something for their community. In a time when people feel stuck inside, we can still have shared experiences with neighbors and strangers. Contemporary art is a way to be together.” The historic Maxon Mills building, part of the Wassaic Project, is the last stop of the Metro North train, and disembarking train passengers will immediately encounter the ghostly image of Chan’s massive waterfall. They can choose to walk around it, or towards it, but the natural spaciousness of rural Wassaic allows for distanced, undisturbed viewing.

The planning and creative development for All is Not Lost took place over two and half years. Chan says the projection was designed to be in visual harmony and scale with the architecture of Maxon Mills and the surrounding town of Wassaic. The video itself is a composite of videos of waterfalls filmed by the artist from 2017–2018. On the potential of public art, Chan says: “We walk through spaces every day, buildings or roads that often have functions that are primarily economical or industrial. These spaces were planned to get us somewhere, not to stop or pause. But as in life, sometimes we’re not trying to get somewhere quickly; public art invites us to stop and just be in the moment, wherever we are — the in between spaces, the spaces where we are simply on our way to becoming ourselves, are what I’m interested in.”

In September, the installation will be on view from 8:00 PM to 9:30 PM. In October, it will be on view from 7:30 PM to 9:00 PM.Please note that, in response to COVID-19, Metro-North has suspended train and bus service to Wassaic on Saturdays, but eight trains arrive per day on Fridays. Timetables are updated frequently, so please check MTA’s website for more information. To view the installation by appointment, contact hello@wassicproject.org.

Images courtesy of the Wassaic Project