While helping the Taconic Hills Varsity Girls Swim Team win the Southern Division in the Berkshire League, 9th grader Emma Avenia set new school records in swimming in both the 200 and 500 freestyle. “I have been swimming since 2016.” Emma says, “I love coming to practice every day and making new friends.” Emma was born and raised in Hillsdale, NY, and says she has tried other sports in the past but none quite as competitive as swimming where she has certainly found her athletic niche. 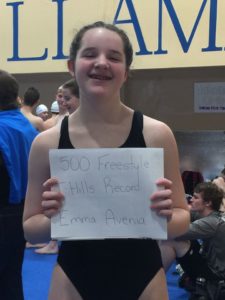 Undoubtedly, both the Varsity Girls Swim team at Taconic Hills, as well as the team at Simon’s Rock -where Emma has also competed- are thankful the young star ventured down the path she did. Over the winter, Emma set her own precedent when she achieved two milestones. The first was an 11 year old school record in the 200 freestyle with a time of 2:15.50 and in early February Emma broke another school record in the 500 Freestyle with a time of 605.16. “I am proud of my accomplishments so far but I also hope to improve in the future.” Considering her unbelievable one-two record breaking punch already, it is perhaps safe to say the sky’s the limit for the already decorated young athlete.