It’s summer. It’s hot. And we feel we need to keep the no bake or minimal bake theme going.

Frozen Lemon Pie is a cinch to whip up. With very few ingredients and just a couple of minutes whisking egg yolks and sugar over the double boiler, you’ll have a refreshing summer dessert in no time!

The filling vs. crust debate

When making a pie, yes, you need to have a delicious filling, but for us, it is equally important to have a delicious crust. Nilla Wafers elevate this pie to an entirely new level. We hadn’t had Nilla Wafers in years and honestly forgot about the vanilla-y little wafer cookie. They sure are a yummy treat on their own, but make for an even yummier crust for a dessert such as this! Next level, even.

Frozen Lemon Pie has been said to taste like an orangecicle only in pie form and made with lemons. This recipe was found in our recipe book in Olivia’s handwriting. It was probably written when she was a teen because the recipe was very vague, and instructions were missing. It was more like notes jotted down on a recipe card.

And so, after making the pie a few times, we think we have it perfected. The first time we made it, we chose not to freeze it, the second time we did freeze it. You can do either. Half of our taste testers preferred it frozen, half liked it refrigerated. We also baked the pie crust the first go around, but that is totally unnecessary. The crust held its shape very well refrigerated and frozen.

This pie is not too sweet, has a bit of tartness to it and is just super-duper refreshing.

Crush Nilla Wafers in a food processor or blender until course. Melt butter with 1/4 cup of brown sugar. Mix butter and brown sugar together with Nilla Wafer crumbs. Press firmly into a 9” pie plate and set aside.

Whisk the 3 egg yolks together with 2/3 cup of sugar, juice of one lemon and the rind over a double boiler until mixture thickens. Set aside to cool.

Beat egg whites with 2 tbs of sugar until stiff peaks form; set aside.

If you are freezing the pie, remove a few minutes prior to serving. It will make slicing so much easier! Serve with whipped cream (we added candied lemon rinds to garnish our pie, DM us for the recipe). 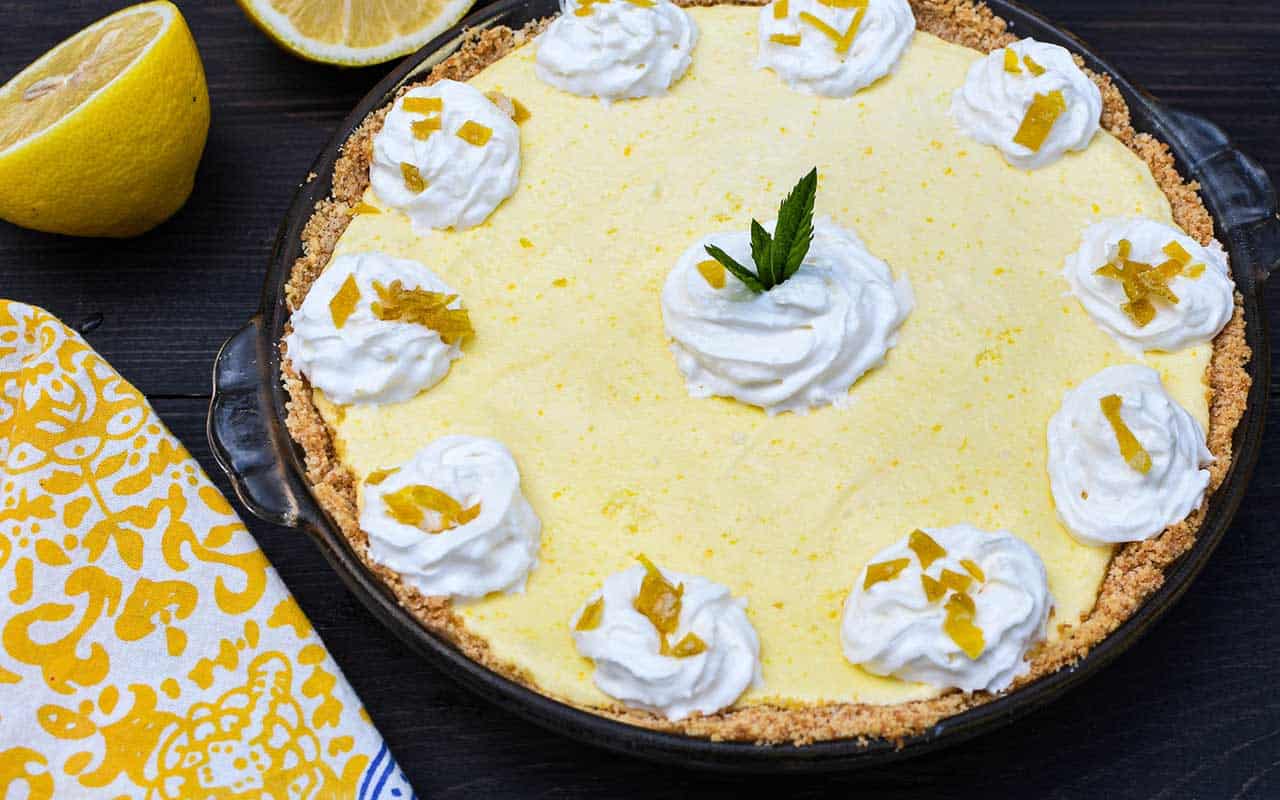