If Orville Dewey were around today to see how is legacy has lived on in the hearts and minds of the residents of Sheffield MA in the form of the up-tone yet pastoral structure known as Dewey Memorial Hall, he would undoubtedly be proud of the building, inspired by the spirit of the community that is thriving, and perhaps most importantly, join in on the festivities. The historic building was founded in the late nineteenth century in honor of the late Orville Dewey, one of the foremost Unitarian thinkers in the nation’s history and has been used as a community space since its inception over a century ago. The man himself lived his life in Sheffield as popular free thinker, which did not come without a fair share of controversy given the area’s strict adherence to Calvinism at the time. Undeterred, Dewey’s healthy theological skepticism helped him become the pastor of the Second Unitarian Church of New York in 1835. Despite his pension for doubt when it came to religious ideals, Dewey was a beloved member of the community who preached the values togetherness and community kinship 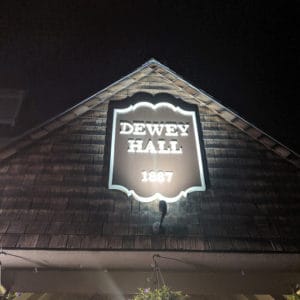 Today, the event organizers at Dewey Memorial Hall have taken Sheffield’s patron inspirational leader’s principles and expanded them throughout Western Massachusetts, Connecticut, and the Hudson Valley by turning the local landmark into one of the area’s most popular venues for community gatherings, lectures, and perhaps most notably, music and dance events. Dewey Hall is, in turn, supported by the community that surrounds it, receiving cultural council grants from towns like Egremont, Monterey, Alford, Mount Washington, and of course from Sheffield itself. This summer, during those memorably hot August nights, Dewey Hall’s floors will be swinging to the sounds of local jazz, bluegrass, and big band talents. Two of the most popular dance mainstays will be making their respective appearances this September. Oldtone Swing Dance comes to Dewey Hall on Friday, September 20th from 730-11pm and Sheffield Contra Dance Saturday, Saturday September 28th from 730-11pm.

For more information on Dewey Hall and its upcoming events visit www.deweyhall.org.  Special thanks to Oldtone Productions’ Beth Carlson, for more info on Oldtone visit www.oldtonemusicfestival.com