Backstage: the band, the basement, and the man in the middle 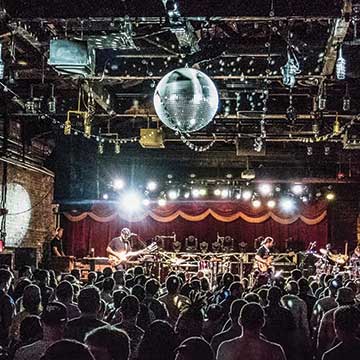 Full disclosure. It’s not a basement. It’s a “cellar,” but a title is a very important thing, and once found, should not be ignored. So, to our story…

Jonathan Grusauskas sits comfortably in the slightly worn sofa that graces The Music Cellar in Millerton, NY. With partners and friends, this is Jonny’s domain – the place where he lives, teaches, composes, records, and dreams.

The sofa (one does not sit on it, but in it) is the spectator area, where proud parents, aspiring students, and countless friends while away the time as lessons proceed in the opposite corner of the room. Guitar, trumpet, drums, keyboard. If someone wants to learn, then the skilled instructors at The Music Cellar are ready to teach.

If there is a need to record, that service is also offered at “The Cellar,” directed by recording engineer Alex Harney. Jonny, Alex and third partner, Kealan Rooney provide the opportunity, the facilities, and the support for young musicians.

The passion for music – and devoting a life to something as ethereal as music does require passion – began at an early age for Jonny, as he is called. His father, celebrated wood artist Frank Grusauskas, who now builds guitars and mandolins, played in bluegrass bands for as long as Jonny can remember. The living room of their home seemed to be filled with guitars, basses, banjos, and mandolins and the sound of people who loved to make music doing just that.

By the fifth grade, Jonny was learning the trumpet and drums and ambitiously started playing with friends in rudimentary bands. That was the down beat … the beginning of a musical career.

It was while attending Housatonic Valley Regional High School that Jonny met others who shared his hunger to make music. By this time, it was rock that fired their imaginations – the kind of hard driving sounds that has been created by Radiohead, The Police, and Pink Floyd. Those connections, made years ago, became the formation of “Lespecial,” the “band” part of his life. But, more on that, later.

Both sensitive and creative, with an openness that has made him a respected and sought after teacher, Jonny spent his college years at Bennington College. “That’s where I met and was mentored by Milford Graves, one of the legendary jazz drummers. He was a huge part of shaping my life and my music.”

Graves, who was so revered that he was asked to play at John Coltrane’s funeral at “the jazz church,” St. Peter’s in Manhattan, traditionally greeted his students with the challenge, “Why are you doing what you do?” Jonny Grusauskas had a very solid answer.

The passion to teach and to play … it seems simple enough, and that was what Jonny brought from his days at Bennington back home.

Take it on the road

A “power trio,” as they refer to themselves, needed to do more than hang out on weekends and fill someone’s barn or basement with songs. There needed to be concerts – performances – disciplined practices where new music could be developed and an existing catalog made better. Festival performances are a major attraction, and the band has been invited to be on the stages of Bonnaroo, Summer Camp, and Colorado’s Beanstalk Music Festival.

“We do a lot of our own original songs and some reimagining of classic pieces,” offers Jonny. “We’re not a ‘cover band’ at all. When we play someone else’s composition, it’s always with a twist … a new approach that’s strictly our own.”

Building a band’s reputation means packing up the gear, driving through the night, playing in small clubs, finding spots in festivals and as opening acts for bigger names. Lespecial has done it all, sleeping in shifts while one member drives through the night … trading off when the beautiful exhaustion of playing a concert that kept the audience on their feet begins to erode the ability to stay awake.

“As we started to get a following, we were able to get a booking agent and hire a road manager when we do longer road trips,” offered Grusauskas, with an underlying sense of relief that paid momentary homage to a passing milestone. “It makes it easier … even safer.”

The fall schedule for the band is exhausting just to read. Weeks on … weeks off. Florida, South Carolina, North Carolina … and that’s just the first four days of November. The rest of the month, the band winds through New York and the New England states with a side trip to Baltimore for an appearance at the respected Ram’s Head Live venue.
For those who long for a “closer to home” setting where they might sample Lespecial’s unique fusion of jazz, rock, and electronic sounds, there are November dates in Hartford and a December concert set in New Haven. Using the power of social media, Lespecial stays connected with their fan base and invites new audiences to view their Facebook page – lespecial.

One of the truly encouraging things for the band is that they have built a loyal fan base that isn’t afraid to take the occasional “road trip” to be part of a performance in a distant city. The release of the band’s second album – cheen – widened their fan base and began getting picked up off of the major music downloading sites.

In between road trips that have taken them across the country and back, there is always The Music Cellar and the opportunity to work with local musicians. Not only does “the Cellar” offer private instruction, it assembles group classes and works with fledgling bands – “paying back” based on skills, experiences, and the understood need for encouragement. “We’ve got some pretty great young musicians coming up, and some interesting bands. I work with ‘Apello,’ two 15-year olds, Lucian Alexander-Roy and Amos Parker, who have a great deal of natural talent. That makes it fun,” he says with a knowing smile.

And, the generosity goes beyond simple encouragement. When music students enter the world of The Music Cellar, they are in the hands of teachers who do care. There have been times when the family budget just can’t tolerate acquisition of an instrument, even a used one. With the heart and soul of committed members of the community, The Music Cellar has frequently found ways to connect budding musicians with serviceable instruments.

“We got our start teaching classes out of the NECC [North East Community Center] under John Mahoney,” recalls Grusauskas. “He was the one who encouraged us to get our own place – to become part of the community and to make a difference.”

And, make a difference, they have. As the man firmly planted in two worlds – teaching and playing – supporting and entertaining – being part of the community and crisscrossing the country to follow his muse, Jonathan Grusauskas is making a difference.

For more information, please find The Music Cellar at 14 Main Street in Millerton, NY. Call (860) 806-1442, visit them online at www.music-cellar.com and Lespecial at www.lespecial.net or find their music on Spotify, Amazon, Bandcamp, and iTunes.