BAH! HUMBUG! THE LASTING APPEAL OF DICKENS’S A CHRISTMAS CAROL 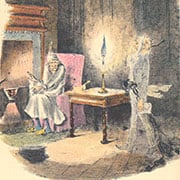 Marley was dead: to begin with …This must be distinctly understood, or nothing wonderful can come of the story I am going to relate.The holiday classic A Christmas Carol opens in Stave One with the icy Ebenezer Scrooge standing in contrast to his kindhearted nephew Fred and his tentative, fearful, yet faithful clerk Bob Cratchit. It is Christmas Eve, and Victorian London is bustling to beat back the cold and fog and welcome in the impending holiday. From his counting house office of Scrooge and Marley, Scrooge holds forth with icy words and a frost-bitten heart. Thus he barricades himself against the cheer and warmth that are an affront to his frozen and fixed perspective.

In the following staves or chapters Scrooge is visited by his late business partner “seven years dead.” Jacob Marley, his jaw bound by a tattered kerchief and his limbs fettered by heavy chains, warns Scrooge of the precarious state of his soul. He emphatically discloses that Scrooge wears his own invisible chain, forged by neglect of the common welfare and a single-minded pursuit of material gain.

Marley then foretells of three ghosts who will visit in rapid succession. “Without their visits you cannot hope to shun the path I tread,” warns the ominous Marley. So begins Scrooge’s temporal journey. All the while he is battling his past, coming to terms with his present, and seeing the effects of what he will have wrought in the future.

The ghosts reveal to him that a different way is possible, that the past does not have to define his future, and that redemption is within his grasp in the present. We meet characters that challenge Scrooge’s world view. At different junctures in the story they offer him exit points off the path of financial gain toward one of “charity, mercy, forebearance, and benevolence.” Former boss Old Fezziwig, ex-fiancée Belle, nephew Fred, employee Bob Cratchit, and Cratchit’s ailing son Tiny Tim all show him a way forward toward the generosity of spirit he has lacked.

Then with rapidity of transition very foreign to his usual character, he said, in pity for his former self, “Poor boy!” and cried again.

A Christmas Carol contains themes that emerged from Dickens’s childhood. At the age of twelve Dickens was forced to sell his much-loved books, leave school, and work in a shoe blacking factory while his father served a sentence in debtors’ prison in Marshalsea. This fall from grace had a huge impact on Dickens and formed his thoughts about social class, inequality, children’s rights, education, and social justice. He wove all these themes into the packed pages of this holiday novella and many of his other works.

This boy is Ignorance. This girl is Want. Beware them both … but most of all beware this boy, for on this brow I see that written which is Doom…

The early 1840s saw a confluence of events that led to the writing of A Christmas Carol. Dickens’s visit to the Field Lane Ragged School in London confirmed his belief in the power of education to lift people, children in particular, out of poverty. In a letter to The Daily News, Dickens explained that ragged schools were an attempt to educate those on the very margins of society by providing free education, often during the evening, and always in the “most obscure and squalid parts of the Metropolis.”

He further stated that, “They who are too ragged, wretched, filthy, and forlorn to enter any other place: who could gain admission into no charity school, and who would be driven from any church door; are invited to come in here, to find some people not depraved, willing to teach them something, and show them some sympathy, and stretch a hand out, which is not the iron hand of the Law, for their correction.” Dickens acutely understood that education was, and still is, the key to lifting children out of their poverty and ignorance – not prisons and workhouses.

Further, in 1843 Parliament issued a report that described a seamy underbelly of the Industrial Revolution. This document exposed the Revolution’s effects on children, society’s most vulnerable members. Dickens planned to issue a leaflet to publicizing these findings and sounding a call to arms on the issue.

In October 1843 he delivered a fundraising speech at the Manchester Anthenaeum and urged workers and employers to use educational reform as the means to improve life circumstances. Filled with fervor, in the days following his talk in Manchester he scrapped the earlier pamphlet idea and plotted out the storyline of A Christmas Carol.

“Are there no prisons?” asked Scrooge… “And the Union workhouses…Are they still in operation?… The Treadmill and the Poor Law are in full vigour, then?…I can’t afford to make idle people merry. I help support the establishments I have mentioned: they cost enough: and those who are badly off must go there.”

Increasing poverty rates brought efforts to address their divisive effects on society. The early Poor Law of 1815 dictated that each parish must look after its own poor. This provided local assistance to the economically disen-franchised. Yet the dawning Industrial Revolution caused numerous societal shifts including the swell of factory labor; the migration of agricultural workers and trades people from rural to urban centers; the rise in concentration of wealth and ensuing inequality; a fall in wages; and an increase in breadth and depth of poverty.

Further, by 1830 the cost of The Poor Law had risen dramatically and so had mounting resistance to its funding. The dwindling middle class, through taxation, was bearing the burden of supporting an increasing number of the indigent. Stereotypes of a lazy and undeserving poor having more children than they could feed were on the rise, along with resentment and lack of compassion for their plight.

This led to The Poor Law Amendment Act of 1834 that ended direct monetary support through local parishes, and called for the establishment of workhouses. In exchange for food, clothes, and housing the poor were kept on a rigorous schedule of work, with little time for meals or rest.

In these workhouses, families were often split apart. Residents were forced to wear uniforms. Living conditions and food quality were deplorable. Workers were forced to walk treadmills for hours on end, at first to grind wheat or pump water and then as punishment for perceived idleness. Some observers of these conditions believed this law and the ensuing cruel treatment of the poor made workhouses “prisons for the poor.” Those in need would truly rather die than go there.

Dickens’s own personal financial woes also fueled his motivation for writing a popular piece. With his wife pregnant with their fifth child, a heavy mortgage, and slumping sales from monthly installments of Martin Chuzzlewit he needed fast cash. Memories of his father’s stint in debtors’ prison and the catastrophic effect on his own early life, combined with his observed lack of social safety net, provided the fire in the belly for penning a successful book.

I have always thought of Christmastime… as a good time: a kind forgiving, charitable, pleasant time: the only time I know of, in the long calendar year, when men and women seem by one consent to open their shut-up hearts freely, and to think of people below them as if they really were fellow-passengers to the grave, and not another race of creatures bound on other journeys.

The events and institutions described above, Dickens’s personal responses to them, and his vision for social reform gave birth not only to A Christmas Carol, but Dickens’s self-described “Carol Philosophy.”

Eschewing position papers, speeches, and the bully pulpit, he now believed what any fundraiser today knows – that if one wants people to make an issue personal and motivate them to change or to give, one needs a powerful personal narrative. A Christmas Carol provided the platform for social justice issues and the heartfelt emotional pull to drive the message home.

Dickens used the season of good cheer to help people awaken from the slumber of material self-interest to see those in need existing beside them. For Dickens, we were all on the same journey from birth to death and some, through accident of birth, circumstances beyond their control, and the vagaries of industrial capitalism, had fallen outside the acceptable limits of society.

I have endeavoured in this Ghostly little book, to raise the Ghost of an Idea, which shall not put my readers out of humour with themselves, with each other, with the season, or with me. May it haunt their houses pleasantly, and no one wish to lay it.

After writing and publishing A Christmas Carol on December 19, 1843, Dickens gave the original version to his solicitor Thomas Mitton as a gift. Earlier in December Dickens wrote to Mitton inquiring about a short-term loan of £ 200. Dickens stated that his account was overdrawn and this loan was a temporary one, citing that his forthcoming “Christmas book… will enable me to keep comfortable.”

This handwritten manuscript was written in black ink with a goose quill pen, bound in red goatskin, with Mitton’s name stamped in gold on the cover. It contains glorious and telling cross outs and corrections. These edits and marginalia are documented proof that signify the author’s intentions. Insights such as these are becoming rarer in our technological age.

The manuscript exudes the air of a work written with great haste and fluidity, probably due to an effective alchemy of inspiration, a looming deadline, and financial need.

In 1875, Mitton sold the manuscript to London bookseller Francis Harvey for £ 50. The volume changed hands a number of times until the early 1900s when American tycoon Pierpont Morgan purchased it for his collection. It is on display online and each holiday season at The Morgan Library and Museum in Manhattan (blocks from Grand Central Terminal).

Best and happiest of all, the Time before him was his own, to make amends in!

Aside from the wonderful imagery contained in this neat literary package tied up in a heartwarming bow, in A Christmas Carol we catch a glimpse that our own redemption is achievable. Life offers us many opportunities for change. Our own ghosts can be mustered to see the world and our place in it with more compassion and less emphasis on mammon.

The transformed Scrooge enables us to capture a glimmer of our own salvation, and like him, we have the power to craft it through a simple, yet profound shift in thoughts and actions.