Luci and Desi. They were giants. Nicole Kidman and Javier Bardem. They are legends. Aaron Sorkin. He’s an undisputed genius. Add together, mix well and roll out onto the screen as Being the Ricardos and the recipe holds up from start to two hour and five minute finish.

It’s highly unlikely that many of us saw Being the Ricardos when it enjoyed its brief theatrical run in New York City in December of 2021 to qualify it for consideration in the important awards competitions. A theatrical run was never the objective as the funding for Sorkin’s auteur effort came from Amazon and the film streams on Amazon Prime.

This is not a commercial for Amazon, but if you have the Prime service, then dive in to Being the Ricardos and savor the experience of splashing around with brilliant actors, a razor-sharp script and a production that never misses a beat. If you’ve been indecisive about getting yet another streaming service, this could be the tipping point. Along with the rest of their ample film catalogue, Being the Ricardos is a very strong reason to enroll. 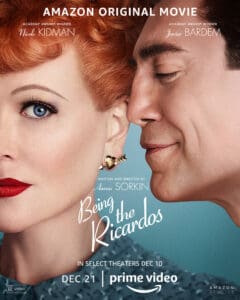 There was a flurry of promotional conversation about whether Nicole Kidman was really the correct actor to embody Lucille Ball. Kidman acknowledged doubts about the role and her aptitude for the character. Similarly, Bardem said he had waivered on accepting the role of Ricky Ricardo. Presume that the dust-ups were merely a way of attracting attention to the film and the performances. With the Golden Globes (in ignominy) already announced, Nicole Kidman has added a trophy to her case with critics predicting that multiple OSCAR nominations and several wins could be on the horizon.

Sorkin, in his inimitable fashion, has found a way to encompass the deep background of Desi and Lucy, their chance meeting and torrid romance, the widely reported “indiscretions” the band leader engaged in throughout their marriage, the struggles with both network (CBS) executives and sponsor Philip Morris, the comedic genius of Lucy and the production insights of Desi, the clashes between producers and actors and writers and directors and the House Unamerican Activities Committee … and put them all in the week-long production cycle of a ‘50’s network sitcom. From table reading to blocking to rehearsal to performance in front of a live audience, it’s all here … one episode of I Love Lucy that says it all.

From the comfort of your couch or easy chair and the relative calm of your own home, this is an evening to savor and enjoy. Being the Ricardos is a touch nostalgic, a touch edgy, a touch controversial, a touch political and altogether engaging. Supporting cast members, especially J.K. Simmons as William Frawley/Fred Mertz and Nina Arianda as Vivian Vance/Ethel Mertz brilliantly bring both tension and compassion to their interaction with the Ricardos. The package is elegant in its creation and Sorkin has, again, proved that he is a major force.

44 Million people tuned in every Monday night to watch I Love Lucy through its legendary run. Watching Being the Ricardos, it’s easy to see why.

Being the Ricardos streams on Amazon Prime. Rated R