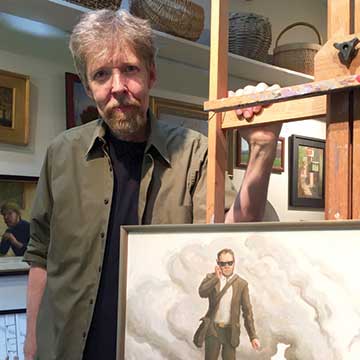 The quote has been credited to two imaginative thinkers: “Those who can, do. Those who can’t, teach.” Was it H.L. Mencken or George Bernard Shaw who initiated the challenging, ironic, and slightly deprecating thought? Does it really matter?

Not only does it not matter, it certainly doesn’t apply when one steps into the quietly creative world of Warren Prindle. Warren is an artist … and he teaches art. He can, he does … and, he teaches, too.

Prindle’s story is very much a “local boy makes good” tale that includes stops in other states, other cities, and a catalog of experiences that began and have ended up in Sharon, CT. Son of the founder of eponymous Prindle Insurance, Warren left pursuit of the family business to an older brother as he journeyed to Chicago after graduating from high school.

First stop in the “City of Big Shoulders” was a three year residency at Moody Bible Institute where Prindle pursued a degree in Theology. There was a stronger muse for Warren, however, and that was his creative side … his desire to explore the world of fine art.
A navigational shift took him across town to the American Academy of Art where he quickly captured his first degree, followed by degrees from both Northeastern Illinois University and, ultimately, from Northwestern State University of Louisiana.

It was at the American Academy of Art, however, that Warren got his first taste of teaching. When his instructor, widely collected and celebrated painter Fred Berger, quickly identified Warren’s great talent, he was invited to become the teaching assistant for Berger’s class. Master artists appeared in class on Mondays, Wednesdays, and Fridays. Tuesdays and Thursdays were the responsibility of student assistants and monitors, who were learning and also supporting the rest of the class.

“It really felt right,” recalls Prindle with the smile that reflects a moment of revelation. The parallel disciplines were set. Do and teach – not mutually exclusive, but very much mutually supportive.

Married with three young children, the magnetic attraction of Northwestern Connecticut drew Prindle and his family back to Litchfield County after several years in Chicago with dreams, plans, and significant talent. His first idea, setting up his own art school where he could ply his talent and encourage others, ran into an immediate challenge. Finding art classes from notable painters was not difficult in the area. It was, in fact, quite easy. Another art school was not what the public demanded.

The painting continued, however, as did Warren’s imaginative sense of adaptation and survival. After all, there was a family to support as well as his artistic muse to follow. The catalogue of activities he pursued while remaining true to his art bemuse him and read like a listing of “things one does while searching for the path.” One vivid memory involves time spent with celebrated author Philip Roth, whose Goodbye, Columbus and Portnoy’s Complaint established him as a literary power. “He was always open and deferential,” recalls Prindle. “Just having extended conversations with him was an education.”

It was when the medical challenges of a beloved member of the Housatonic Valley Regional High School (HVRHS) provided an immediate need for a substitute art teacher – a need that turned into a permanent opening the following September – that Warren Prindle found his calling.
Maggie Cady, Program Coordinator at the Northwest Connecticut Arts Council recalls Prindle as the most supportive art teacher she had through years of high school and ultimately as a Fine Arts major at Pennsylvania’s Muhlenberg College. “He was so perceptive, he knew where our strengths were … and he made sure we pursued them.” That assessment is strong affirmation of Warren Prindle’s view of what is so engaging about teaching. “There is such a flow of energy that comes from the students,” Warren affirms. “When you get the chance to work with someone who leaves high school and moves on to art school, it’s incredibly satisfying.”

The satisfaction has been repeated many times. HVRHS art students have been accepted at all of the major art schools and colleges in the United States. Certainly a portion of the credit for that fact is Warren Prindle.

As important as the teaching side of Prindle’s career continues to be, his role as a fine artist cannot be overlooked and certainly not minimized. Warren Prindle is a serious painter whose work is regularly collected and revered by individuals across the country. For the past 20 years, the Carol Robinson Gallery in New Orleans, LA, has been the agent for Warren’s work. The list of collections that include his work is most impressive, including the Kirkland & Ellis Law Firm in Chicago, and David Hoy & Sons Fine Art in Los Angeles. He’s won significant awards from The National Oil Painters Society (Founders Award), and The Union League Civic Art and Foundation Award.

Several influences are apparent in Prindle’s work, all of which have been molded into the distinctive style that is unique to the artist. The Italian influence, from the Baroque forward, appears in his character presentations.

It is another Italian artist, film auteur Federico Fellini, whose casting demands best sum up Prindle’s character presentations: “You must make every person interesting…” In Warren Prindle’s paintings, every person is very interesting. Some of those people even wear halos – gold leaf indicators of their importance and the reverence of the artist’s presentation.

Influences behind the work

There is also a spiritual, almost metaphysical influence in Prindle’s work as well. While still in Chicago, after his years at Moody Bible Institute, he studied with Bruno Surdo at the Spertus Institute for Jewish Learning and Leadership. His mystical images represent just one transitional period for Prindle who laughingly states, “I’ve painted my way through art history, including true gesso, egg tempra, and the inclusion of gold leaf.”

The motion, emotion, and energy in Warren Prindle’s work are magnetic. Backgrounds are almost irrelevant, although he has painted some engaging landscapes and cityscapes. When there are figures central to his artistic vision, they control the space and convey all of the sentiment and emotion generated with each brush stroke of oil paint on panels.

Few of the characters in Prindle’s paintings look out from the painting into the eyes of the observer. They are too engaged in their own pursuits to stop and look. In Saint Mom the mother of two pushes the stroller forward. Do we notice that she is not on pavement, but struggling through long grass? One thing we cannot ignore is the golden halo that encircles her turned head.

Street Talk captures another moment when the passage of time is more important than paying attention to the audience. Men at work, engaged in the tasks of the day, stop for a moment to talk. The conversation is the only reason to stop, and they are much too engaged to be interrupted.
It is these “moments” that are the spirit of Warren Prindle’s work. A look, a kiss, an action that is caught in elegant style to be revisited anytime one is drawn into one of his paintings.

There is another quote, famously made by Fellini that certainly applies to the balanced life and career of
Warren Prindle: “All art is autobiographical; the pearl is the oyster’s autobiography.”

The quote on www.ratemyteachers.com sums up the way the hometown sums up the work of Warren Prindle: “Best. Art. Teacher. Ever.” •

For those interested in seeing the fine art of this uniquely qualified artist, either head to New Orleans or visit www.carolrobinsongallery.com.
Are you an artist and interested in being featured in Main Street Magazine? Send a brief bio, artist’s statement, and a link to your work to info@mainstreetmag.com.