You and your father are nationally known as falconry experts. How do you describe your unusual business?

Simply put, our business is birds of prey. Our activities center around breeding falcons, owls, hawks, and eagles primarily for zoos and educators; wild bird control using birds of prey; and, through Falconry Excursions, introducing people to these wild birds – both here in Goshen and at special events. We hold five federal and nine state permits to operate legally.

The business has grown organically and began as a hobby for my parents, both of whom are experienced falconers. The actual business started when they were asked to participate in a bird abatement pilot at JFK Airport in 1996 which generated a lot of publicity. For two years, 12 falcons and four hawks harassed and scared seagulls from the runways just as effectively as netting and shooting, although at a higher cost. From that our wild bird control business grew gradually into abatement programs for stadiums, power plants, landfills, resorts, wind farms, and, especially, blueberry fields and vineyards.

I do a lot of consulting with clients in the process of selling our services. The difficulty is that falconers and birds have to be on the site every day, day after day. The undesirable birds return when the hawks are no longer scaring them away. Usually, we get called in after other traditional approaches have failed or special situations like Manhattan’s Bryant Park where less expensive solutions are unpalatable. 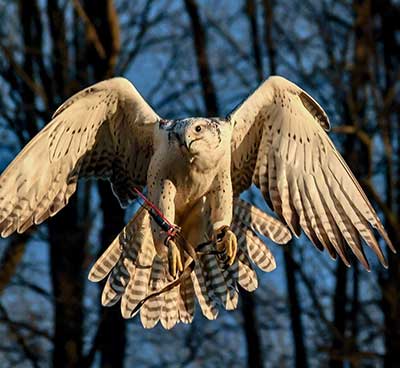 What birds of prey do you fly?

It all depends on what’s needed. We used Harris hawks to get rid of the pigeons that accidentally found their way into Grand Central Station. They were making a mess of the Apple store. Harris hawks hunt in packs and we released three at a time. The birds were trained to bring the pigeons straight to the floor and then we rushed over and took them away for relocation while they were alive.

When did you start Falcon Excursions?

Along with my father’s wild bird control activities, our bird experience activities also started to grow. Prior to Covid, pest control and our excursion business here in Goshen were equal in size, but with Covid there were fewer people leaving food scraps around for birds to eat. Businesses tightened budgets eliminating wild bird control programs – the first thing to be cut from the budget although now we are seeing clients returning. BUT our bird entertainment education business held outside is very strong. Typically, we do three or four shows a day and they are sold out, with weekends booked a month in advance. We’re only a mile from Legoland which is great for us.

Breeding of birds is a less important segment of our business, as both the success of a breeding season and the demand for birds are very unpredictable. We are licensed to breed any kind of bird, except for bald eagles and golden eagles, and we cross breed to create the most bad ass hunter possible by mating a Gyrfalcon from the Arctic with a Peregrine Falcon.

What about special events and gigs?

We love to go to weddings. Sometimes we’re just there for photo ops during cocktails, but we also walk around with the birds and engage wedding guests – it’s a great icebreaker that brings families together. We even offer a bird flying a wedding ring in for the marriage ceremony. We also get paid to do demonstrations at schools, fairs, and camps. A couple of weeks ago we took birds to Troutbeck in Amenia, NY, for a member-only event.

Our birds have appeared in many fashion shoots, and animal casting companies contact us for TV and movies. Our owl was on the TV show The Blacklist where it was saved from being eaten. Movie tax credits have brought lots of filming up here, which is much better than traveling to New York City.

How many birds do you have? How long do they live?

Right now we have about 130, many of which will be sold this spring. Year round we work with about 20 highly-trained birds for both abatement and shows. 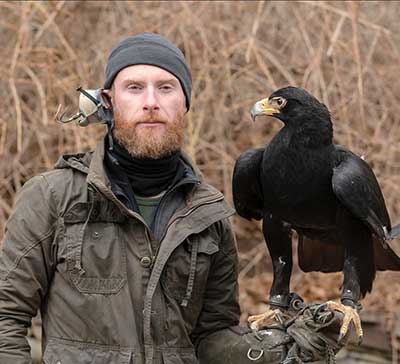 Do birds have personalities?

Some birds love to perform in front of an audience and, typically, they are not the best at hunting. Owls, unlike hawks, hunt by ambush and, as a result, they tend to be more laid back and patient than hawks which are high strung. Birds really don’t bond with humans except as a source of food. They all have names, but they just respond to food.

How do you become a falconer?

It’s not easy or fast. Anyone interested in becoming a falconer must first pass a 100-question test given by the New York State Department of Environmental Conservation. The test is given only twice a year and a passing grade is 80% or over. The state provides a study booklet, and the test covers everything from bird identification, avian health, and equipment to regulations. Next you have to become an apprentice for two years with a licensed sponsor who will show you how to capture a falcon, care for the bird and hunt. It’s important to find someone nearby in case you need help quickly.

There are about 250 to 300 licensed falconers in New York State, and less than 200 are active. Many of them are found in the vicinity of universities with ornithology programs like Cornell in Ithaca or SUNY New Paltz. Our family has probably sponsored 50 falconers over the years. Sponsors do not charge apprentices a fee.

Falconry was the sport of kings for much of its 8,000-year-old history. Only kings could afford the expense of caring for the birds and their many closely guarded secrets. Today interest in the sport has exploded with the internet, especially YouTube, Instagram, and movies like My Side of the Mountain.

Where do you get your falcon?

The bird, a Red-tailed hawk or an American kestrel, must come from the wild and is free. When it’s time, usually in the early fall, your sponsor will show you the proper methods to safely capture a healthy raptor.

Hunting with birds of prey is only allowed between October and March and each spring the bird you caught in the fall is released back into the wild.

What else is required?

How many times a day do you feed the birds? What do they eat?

They eat once a day unless it’s breeding season when they can eat two or three times a day to stimulate interaction with birds of the opposite sex. Their diet consists of chicken, rodents, and full-grown quail.

How do you learn how to hunt with a hawk?

The hawk teaches you how to hunt and will capture mice, squirrels, and rabbits. The trick is to make the bird come back to you. In our family’s history with these birds only one didn’t return to us, although they have been misplaced occasionally.

What about your own background?

Because of my parents I started handling birds once I could walk. When I was just nine years old, I got a 92% score on the New York State Falconer’s exam – the youngest person ever. I studied zoology at SUNY Oswego and later worked with Dr. Heinz Meng, the first person to successfully breed Peregrine Falcons in captivity, and Dr. William Robinson, who is renowned for trapping and the tagging of raptor species. After college I joined my father in this family business.

What are your plans for the business?

My goal is to eventually build a center of prey modelled after English centers where visitors can come seven days a week, learn about birds, and watch educational performances.

To learn more about TC Management and Falcon Excursions, visit them online at www.falconryexcursions.com. 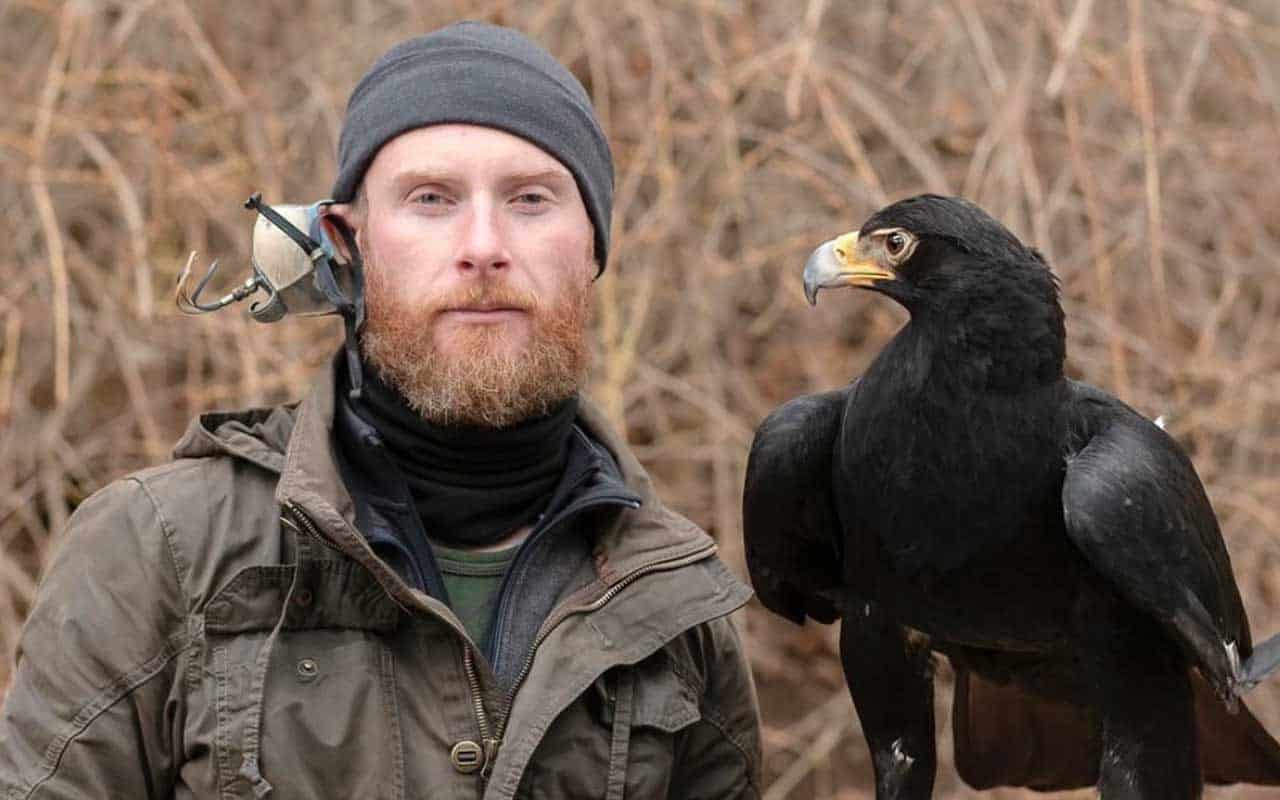