Blog for the Common Man

It can be tempting to think of our town history in terms of its founding fathers, historic houses, and seminal events. But like the history of most small towns, those people, places and occasions serve as punctuation marks in the text of otherwise ordinary lives.

While Hillsdale, NY, indeed has had its share of larger-than-life figures, it was the citizens who did not make it into the history books who made Hillsdale into the place we love today. A case in point would be Thomas I. White.

As a young man, Thomas moved to New York City, where he worked as a carpenter for seven years. In 1852, the New York and Harlem Railroad arrived in Hillsdale, and not long after, Thomas did too.

Thomas put his carpentry skills to use immediately, opening a wagon maker’s shop. Over time he expanded, adding a livery and blacksmithing services. In 1859, Thomas, age 30, married Miss Mary Jane Haywood, age 24. The following year they had a son, Allen.

Thomas made a practice of driving his wagon to the Hillsdale depot to meet every train. He would take arriving 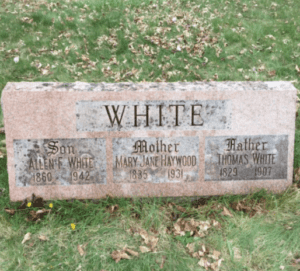 passengers to their destinations, in effect serving as Hillsdale’s first taxi service. But Thomas also had some exciting moments in his wagon.

In 1893, as reported in the Hillsdale Harbinger, Thomas was unloading gravel for road maintenance when something spooked his horses. They bolted and ran in the direction of Pulver’s Clothing Store (today’s Roe Jan Brewing Company), with Thomas holding on for dear life. As the horses approached the store they turned sharply, flinging Thomas out of the wagon and against the building, which cut his left hand badly. The horses then returned to their stable without further incident.

The Whites were prosperous and well-known and liked in the community. Thomas and Mary Jane counted among their friends Mr. and Mrs. Freeland Pulver, Freeland being the noted Hillsdale clothier.

In 1903 the Hillsdale Harbinger reported that Mrs. White had received a visitor – her nephew, Parla Foster of Port Chester, NY. It seems likely that Parla was a descendent of another Parla Foster, a Hillsdale founding father. After the war, Foster had settled in Hillsdale and went on to serve as Town Supervisor. He built the first Methodist church, and also the handsome brick house that today is the home of C. Herrington Home + Design. It’s not clear how Mary Jane White was related to the Fosters, but we do know that at the age of 19, she lived in a boarding house in Hillsdale that was owned by and lived in by William Foster and a whole passel of Fosters.

On Friday, April 22, 1907, 78-year-old Thomas met all the trains as usual. He went home, newspaper in hand, but complained of a severe headache. His vision was impaired and he could not make out the words in the newspaper. He went to bed but succumbed to a stroke and died before morning.

From White’s obituary in the Harbinger: “He will be greatly missed by the traveling public here to whom he had been a familiar figure for years. He was a straightforward, conscientious man, one who, while not taking a large part in public affairs, lived his life in a quiet way, doing all that he did as well as he knew.”

As important as the contributions of people like Parla Foster and Refine Latting (whose tavern is today’s Hillsdale House) were in founding our town, it was people like Thomas and Mary Jane White who made it a community.