Boom town – The City of Hudson 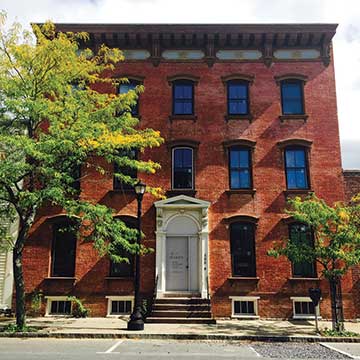 Hudson has always been a city of visionary entrepreneurs from its founding as a safe deep water port for whaling ships in 1783. Originally a small stopping point on the Hudson River called Claverack Landing, it became Hudson when a group of entrepreneurial Quaker businessmen from Nantucket established it as a harbor and the first planned city in America with neatly gridded streets. Hudson thrived and the population swelled as its reputation spread. By the middle of the next century Hudson’s whaling industry went into decline as petroleum products replaced whale oil and the railroads reduced shipping, but new industries arrived – knitting mills, brickyards, breweries flourished, and grand Victorian mansions were erected next to Hudson’s stately Federal buildings.

During the roaring twenties Hudson became a open city frequented by gangsters with bars and an estimated 15 brothels that were shut down by Governor Dewey in 1950. The large cement plant closed in 1960 and, after a period of economic stagnation, the glorious, still intact buildings of Hudson’s past attracted antique dealers from New York looking for cheap space accessible to New York City. Another Hudson renaissance began with this new breed of entrepreneurs in the 80s. Today all kinds of businesses – restaurants, food and wine stores, and boutique hotels – are opening and Hudson has developed an international reputation as the crossroads of majestic country beauty, urban living, and the new economy. Hudson’s history and architectural preservation saved it and has driven an economic and cultural revival.

The Hudson buyer is distinctly different from the standard big city family weekend buyer seeking a secluded farmhouse on 15 acres. Many are buying to live there full-time or create a business there. Home goods store Hawkins NY, which combines city style with country living on Warren Street, is one example. Buyers are younger, and maybe hipper – more Brooklyn than the Upper East Side. They embrace the diversity of Hudson. One broker told a client, “If you don’t like the subsidized housing go look in Connecticut.”

The idea of walking and biking and not needing a car is appealing. These are buyers looking for an affordable urban vibe with a cosmopolitan sensibility in the country. They can’t afford New York City and don’t want to live in the suburbs. Paradoxically this is a generation that loves old buildings, but not necessarily antique furnishings. One antique dealer observed that the early prominence of Hudson as an antiques mecca attracted the online site 1st Dibs to sign up Hudson dealers, who have now shifted much of their business to the Internet.

Even into the 1990s buildings on Warren Street could be purchased for as little as $20,000 (see Red Dot article page 11). That was the crack cocaine period when no one walked down Warren Street at night. John Knott, an early preservationist and developer, purchased his first property, a large four-story building with an aluminum façade, for $100,000 in 1996 on the uptown end of Warren Street. As Hudson thrived redevelopment extended below Fifth Street, then Fourth Street and now both sides of Warren Street are lined with shops, restaurants, offices, and chic hotels for its entire mile long length.

Residential properties mirror the upward trend in commercial properties. But homes are still affordably priced in Hudson. Since 2010 median housing prices in the entire city have grown from $150,000 to $250,000 with average prices climbing from $180,000 to $315,000 as sales at the higher end of the market rose steadily and annual sales volumes jumped over $20 million. Over 90 properties are currently listed for sale, and over half of them are priced below $300,000. Just 16 homes have asking prices in excess of $600,000 (see charts).

Is the Hudson market getting ahead of itself?

Compared to Soho prices, Hudson is still a bargain with buildings available at every price point. Median residential asking prices are $350,000; a hundred thousand more than last year’s record level of $250,000, and average asking price is above $400,000. Some realtors like Andrew Gates of Houlihan Lawrence feel the market is oversold, “The Hudson market has seen tremendous appreciation over the last three decades but is temporarily an over-supplied buyer’s market. Reason being is that after one or two headline sales occur many sellers flood the market hoping to cash out at the new higher numbers; supply then outstrips demand and the market stagnates for several months or even up to a year.”

Rudy Huston with Tri-Hudson Realtors agrees that prices have gone up, but observed that they continue to rise. He currently has a listing at 27 Worth Street that was recently renovated by a designer in the urban Hudson style. In April of 2004 it was sold for $35,000 and flipped two months later for $75,000. In 2006 it was sold again for $194,000 and then again in 2013 for $270,000. After renovation it was sold again in 2016 for $650,000 and is back on the market for $725,000 after the new owner had a change of plans. With a large lot, four bedrooms, and elegant appointments many big city dwellers would see it as a bargain.

In order to confirm what is happening in the market today we compared residential sales for the first eight months of the last three years. The results support the view that prices in the Hudson real estate market continue to rise. The first eight months of this year had the highest average price – $420,892, the highest price paid for a residential property and the highest price per square foot, almost $200. Typically houses in villages, hamlets, and commercial centers in our region are priced at a discount to more rural settings, but living in the City of Hudson seems to command a premium.

Buyers are flocking to Hudson – a real estate boom in a small city that has a higher than average crime rate, where 64% of school age children are disadvantaged, 23% of residents live below the poverty line, property taxes are high, and infrastructure is failing. And yet the Financial Times of London listed five reasons to live there, and the New York Times described it as an “elegant transformation.”

The City of Hudson just received a $10 million downtown revitalization award from New York State. State Assembly Member Didi Barrett understands Hudson’s vision for the future: “This exciting investment is just the boost the historic City of Hudson needs to channel the tremendous creativity, diversity, and entrepreneurial energy that characterizes this community and transform it into a vital, sustainable, and inclusive 21st Century economy – a model for the region and the state.”
In the past two decades Hudson has recreated itself as it did in the 18th and 19th centuries. I should have listened to my Millennial daughter in 2009 when she told me to buy in Hudson. There’s still time.