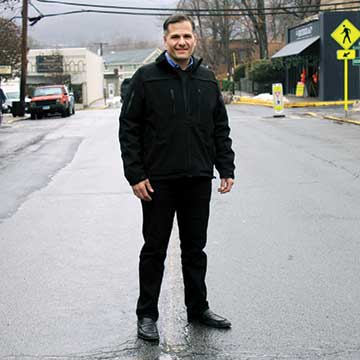 As we turn the page on the second decade of the 21st century, the country’s political climate has perhaps never been more volatile. The rise of social media and the ease of connectivity has transformed the public forum dramatically. Political discourse has become less a proactive discussion for the betterment of our quality of life, and more a series of encounter battles fought for the purpose of clearing the opponent’s opinion from the field. New York alone has found itself at times embroiled in a unique divide based solely on one’s proximity to Manhattan.

In an age where the voting public has become seemingly all too willing to lodge themselves firmly on their respective side of the aisle, it may, in fact, be up to politicians themselves to bridge the proverbial gap. In the Hudson Valley, Dutchess County Executive Marc Molinaro, who won a third-term in November, looks to bridge the gap between identity politics and forge new waves of reform for the people of Dutchess County.

The youngest mayor in the country

Practiced may be an understated way to describe Mr. Molinaro’s political career. Now just 44, Executive Molinaro began public service in 1994 at only 18 years of age, after winning a seat on the Village of Tivoli, NY’s Board of Trustees. Just a year later, Molinaro would be elected mayor of Tivoli, making him the youngest mayor in the country.

After his time as mayor, Molinaro spent four terms in the Dutchess County Legislature where he served as chair of the Budget Committee and co-chair of the Commission on Child Protection. Some of his legislative claims to fame include writing and adopting the Clean Indoor Air Act as well as the Open Space and Farmland Protection Plan.

In 2006, he was elected to represent the 103rd district in the New York State Assembly where he fought to protect the Hudson Valley Greenway and adopted the Red Hook Conservation Fund before winning Dutchess County Executive in 2011, where he serves today. As a self-described moderate Republican, Molinaro is keenly aware of the temperature of today’s political climate. Subverting expectations by implementing one of the most time-honored political strategies-accessibility to the people he serves.

Perhaps unsurprisingly then, Mr. Molinaro took time out of his busy schedule to stop by our office and discuss his career, philosophy, and what he’s looking forward to in his coming term.

What could compel a young man to get into politics like you did at the age of just 18?

I may have been born in Yonkers, but I grew up in Tivoli. That place is so special to me because it was where I held my first job and got to know the community well. I was also at a point in life where most young people begin to think about what it is they would like to pursue. I actually interned for my State Assemblywoman, Eileen Hickey, as a junior in high school and that’s when I started to fall in love with public service.

I had a school teacher, Steve Sutton (who still teaches high school), who encouraged me to take part in a program called Presidential Classroom. I spent two weeks in Washington, DC, surrounded by government and I think that’s what propelled me to volunteer back in my hometown. Tivoli, at that time was a once-bustling riverside community that had perhaps lost its center, and it was the older generation in town that encouraged me to get more and more involved. It was that spirit of community that made me decide to forgo going away for college and instead study at Dutchess Community College while I ran for the Village Board of Trustees. I remember my mother and I made a deal before I decided to run, if I lost I would go off to college, and if won I would I have my first job. So when I decided to run for mayor I ran home to my mother and asked her again if that would be OK, she said no of course – I did it anyway.

How have you seen local government change since your early start in politics?

I believe local government, especially at the village level which is unique in America, and elected officials have the advantage of being a bit more aware of what’s happening around them – which satisfies my desire to connect with people on a local level. I also found that I achieved a sort of tactile personal connection with people I served, so instead of instituting a policy to fill a pothole, I just fill the pothole.

We’ve all seen the nature of political discourse change over the last decade, how do you perceive that change from the viewpoint of an elected representative?

I recall President Obama saying once that we are in danger of living in a “cancel culture,” which to me means a society where a disagreement in ideology results in the cancellation of opinion, and I think the President was quite accurate in that regard.

I would say from a political perspective, the world has changed. The tools for cancelling out what we deem the “other side” are more sophisticated than ever before.

Governing though has become more engaging and on a local level the process has stayed consistent. People still generally believe that their representatives are trustworthy and we, as elected officials, have a direct responsibility to resolve issues that people contact us on a daily basis about.

I do sometimes get offended as a politician when I hear prospective candidates say “If I win, I win, and if I lose, I lose.” There’s a certain amount of perceived indifference present that you just can’t afford to have in local government. You must have pride in what you do and maintain a commitment to serve people – regardless of party. County and local governments don’t always agree on priorities, but we will never seek to be disrespectful to one another.

Is there a certain policy, piece of legislation, or issue on the horizon you would most like to tackle in your next term?

Absolutely, county governments aren’t afforded the luxury of serving only one purpose, in a sense we are the ultimate middle-men. We are responsible for the things you expect as a local resident, like plowing snow, and we are mandated by the State of New York to perform a host of other tasks, something unique to our state.

Our focus continues to remain on job growth; quality, sustainable job creation that will build communities. We don’t have the infrastructure to support multi-billion dollar corporations so supporting the innovation economy is a key element for job growth in our area. We love to see the marriage of downtown, with mix-use residential, small manufacturer, high-tech jobs, and creative arts continue to build a sense of place in the Hudson Valley. There have been thirty consecutive months of job growth in Dutchess County, because slow, persistent commitment to our municipalities works.

Our other primary focus remains on what is the public health crisis of our lifetime, and that is opioid and heroin addiction – period. Without hesitation, how we prevent, intervene, and ultimately treat those dealing with addiction has to shift significantly in this country, because we are losing far too many people.

Dutchess County has perhaps the most comprehensive network of services and probably the most tools of any county in America, now it’s time to put them to good use. This year we are committed to focusing on an Eastern Dutchess effort to centralize addiction services from the Poughkeepsie area. Soon we’ll be pushing out a mobile unit thanks to resources currently being gathered thanks to Assemblywoman Didi Barrett, taking the incredible services we provide in Poughkeepsie and getting them out on the road.

If you believe addiction is an illness, as I do, you cannot expect people who are shamed into thinking it is not to walk into a center while battling said illness. We are fighting this disease in a way that connects by hiring more recovery coaches and expanding our outreach county-wide, that will be a primary focus for my upcoming term.

To learn more about Marc Molinaro or to reach out to him to discuss issues related to Dutchess County, please visit www.dutchessny.gov/Departments/County-Executive/County-Executive-Marcus-Molinaro-Biography.htm.