By CB Wismar | Featured in the April 2016 Issue 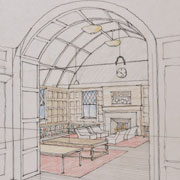 “Just look at this floor! We found it yesterday when we pulled up the old carpet. It goes all the way to the front door.” John Hoffman and Betsy Maury are sharing the latest discoveries as progress continues on the dramatic “make over” of the Scoville Memorial Library, the imposing stone building that has been a centerpiece in central Salisbury for over 120 years. Their enthusiasm is infectious. The result of this process will be, in Betsy’s words, “Truly wonderful!”

Maury and Hoffman are both members of the very active Board of Directors of the library, Betsy being the co-chair of the Development Committee that set out to raise $1.4 million in the “Campaign to Connect” … money that is being used to create an environment in the library that will benefit the community for years to come.

The results of the project funded by the “Campaign to Connect” are being realized from floor to floor, wall to wall, and floor to formerly hidden ceiling in the historic building which has been recognized with a listing icon the National Register of Historic Buildings. Soon to be connected with a bright, open stairway, two levels of the building will provide ease of access to all resources and venues. Meeting rooms that will be open to the public, a special area for young readers, warm and welcoming reading rooms, easily accessible computer terminals, and a children’s area that will open onto a gentle garden will make the historic library very new, indeed.

Specific components of the project had been identified as the result of an intense 2014 listening effort that involved reaching out to cohorts within the Salisbury and Lakeville communities. Schools, businesses, local government, institutions like Noble Horizons and Geer Village were all consulted. Armed with that information, the Board of Directors took their due diligence and planning quite seriously.

The primary need, as established by this research and acted on by the Board, was to connect the main floor of the building with the lower level, an addition that had been added in 1981 to house a children’s room and, in 2006, the Wardell Community Room.

Movement between the two levels had, for years, been a matter of leaving one level, going outside and traversing the hillside to arrive at the other. It was inconvenient, at best, and did not promote the kind of free-flowing interaction expected of a community cultural hub.

The fundraising target set, the Board went through the meticulous process of selecting a design firm that would not only be mindful of the great character and history of the building, but would assist in creating a future view of what the library could be for the various communities served.

Peering into the future”We want to preserve a free and open environment for our patrons,” asserts Betsy. “As much as we can, we want to look five and ten years down the road and try to anticipate what both needs and interests will be.”

Foretelling the future is always a delicate process, but with the design talents of Rob Bristow and Pilar Proffitt of POESIS design, ideas became sketches, became renderings, became architectural drawings … and the physical renovation process began.

“I feel like this project is what I’ve waited for all my life,” says Rob Bristow with a knowing grin. “This is really important.” Quite an assertion from a firm that has designed high profile hotels and public buildings, striking homes in Massachusetts, Connecticut, and Virginia, and Harney Tea SOHO in New York.

Although the main rooms in the library are now occupied by table saws, work benches, and temporary scaffolding, the renderings promise environments that pay homage to the building’s rich past while comfortably ushering in the future. A barrel-vault, long covered by a drop ceiling, is about to be liberated to restore the open expanse above one of the reading rooms.

In the quarter-sawn oak paneled fireplace room, a propane fireplace insert and the addition of comfortable club chairs will keep the classic venue inviting in a more environmentally friendly way.

Under the leadership of Claudia Cayne, Director of the Library since 2002, Scoville Memorial Library has consistently offered programs and services that have become staples of the Salisbury community. Over 8,000 people are engaged each year in experiences ranging from an active Wednesday morning Story Time with Miss Molly, to literary seminars guided by author and media personality Mark Scarborough, to musical programs with Christine Gevert, to chess games, bridge tournaments, poetry readings, presentations on landscaping, fishing and home design and, quite naturally, book clubs.

In the demolition/construction period, the library has made every effort to maintain its relevance to the community. Utilizing other library resources from neighboring communities and scheduling sponsored programs in nearby venues, the offerings have continued.

For those whose daily regimen includes a visit to the library to peruse the daily papers and catch up on their periodical reading, every effort is being made to maintain that loyalty. “We don’t want folks to go elsewhere while all of this is going on,” cautions John Hoffman. “Loyalty is important for the future.”

Loyalty is also an essential link to the heritage of the past. The library dates its founding to the 1771 gift of 200 volumes sent from London by Richard Smith, a gentleman with a somewhat unique business empire that included both a London bookshop, and a Salisbury blast furnace.

By 1803, other residents stepped forward to continue the process of building the library’s collection. Caleb Bingham imported 150 volumes from Boston to increase the library’s holdings and signaled the importance of what was becoming an important cultural landmark.

It was not terribly long, 1810 in fact, when the town of Salisbury contributed to the acquisition of additional volumes to the growing collection. That investment made Scoville Memorial Library the first publicly funded library in the United States. The town’s engagement in the support of the library has continued for over 200 years, with some 30% of the library’s annual operating budget coming from the town.

The remaining 70% of the annual budget and all of the funding for “Campaign to Connect” are at the behest of contributors and patrons who not only recognize the importance of the library in the cultural fabric of the community, but want to ensure that place into the future.

“The community has provided broad support,” asserts Betsy Maury. “Annual contributions to the library cover a range from a few dollars to some significant sums … all of which are really appreciated.”

And, the work continues on the interior of the building in an effort to welcome the community to inviting physical spaces and both resources and programs that will not only meet their needs now, but in the foreseeable future.

The existing building was dedicated on July 11, 1895. Money for the construction came from an 1891 bequest by Jonathan Scoville, whose gift is commemorated in the library name. While board members are reluctant to predict an exact target date for the grand re-opening of the building, their focus on summer of 2016 is apparent. “When one project is started, other things appear,” muses John Hoffman. As walls come down, things hidden for decades are suddenly liberated. But with a clear plan in place, the distractions are minimized and the progress continues.

Come summer, 2016, the new Scoville Memorial Library in Salisbury will be ready to welcome visitors, and the “Campaign to Connect” will be able to share its vision with an eager, expectant community.

For further information you can call the library at (860) 435-2838 or visit their website at www.scovillelibrary.org.