Capital Region could Reopen by Tuesday According to Officials

According to a report from the Albany Times Union that broke late last night, Albany County Executive Dan McCoy said he expects 126 new contact tracers will complete their training imminently, allowing the Capital Region to reopen a portion of the economy on either Tuesday or Wednesday. The Albany Times Union reported that McCoy stated that the county will rely on current employees of the government to serve the roles of contact tracers for COVID-19 cases. Many candidates were taking the 4-hour class on Monday, and similar efforts were underway in Rensselaer and Schenectady counties. According to State officials, the region needs to have 383 contact tracers to meet requirements set by the state, but McCoy said he expects the region will have between 400 and 500 trained tracers once the training program is complete.

According to a press release, as of Monday, the Capital Region needed 166 contact tracers in order to meet the State’s 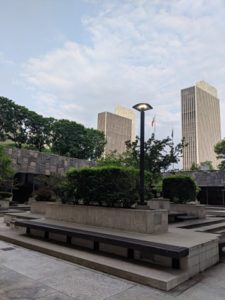 requirement to begin reopening its economy under New York Forward metrics set forth by Governor Cuomo. Columbia County Board of Supervisors Chairman Matt Murell said on Monday, “The Capital Region has hit six of the seven metrics. I think we’ll be able to start reopening under Phase One of the plan at some point this week.” Murell has been meeting daily with the chief elected officials of the Capital Region focused on what needs to be accomplished in order to begin getting the economy re-started. On Sunday Murell said, “We’ve been working hard to achieve the metrics the state is requiring us to reach before beginning to re-open the economy under the four-phase plan. Everyone is focused on how to make that happen as quickly as possible.” Murell added, “I’m happy to say that as of today, it appears that the Capital Region will be able to begin reopening under Phase One of the plan this week as long as we meet the required number of contact tracers.”

Columbia Comeback, the committee appointed by Chairman Murell to serve as a resource for local businesses, recently held its first meeting. Chairman Murell said that in its initial phases, Columbia Comeback will look to guide the implementation of the Governor’s Guidelines for the Phased Re-Opening, facilitate communication to ensure the safe reopening of businesses, and provide resources, guidance, and assistance to businesses as they work to ramp up to full operation.

For the full article from the Albany Times Union click here

Information on the metrics used to determine when a region is eligible to resume business activities can be found at forward.ny.gov