Challenging Us as Political Beings in the World 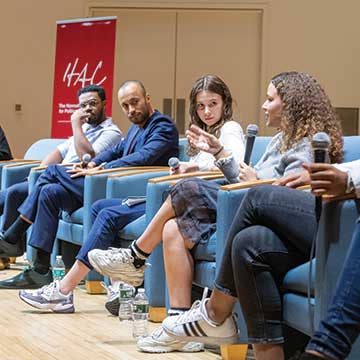 Academia, stuffy lectures, silos of thought, ivory towers – these visions of scholarly pursuits are not the pillars of the Hannah Arendt Center for Politics and Humanities at Bard College. In contrast, the Center dedicates itself to open, bold and diverse thinking, active questioning, and deepening an understanding of our collective political lives.

The Center grew out of a conference in 2006 to celebrate the 100th anniversary of Arendt’s birth. Bard is the location of the Hannah Arendt Library, a resource of about 4,000 books from Arendt’s personal library to which then-visiting professor Roger Berkowitz wanted to draw attention.

Berkowitz, with a doctorate in jurisprudence, pitched the conference idea to Bard president Leon Botstein. “I found Arendt to be provocative and fascinating, but I was not an Arendt scholar. I wanted to invite 15 to 20 smart, diverse people who read Arendt from their vantage point. Leon told me, ‘Spare no expense, but raise the money.’”

After scrounging up $5,000 and securing the presence of controversial British writer and editor Christopher Hitchens, who was keenly interested in Arendt’s work, the first conference, called Thinking in Dark Times, was born.

After that event, Jerome Kohn, Arendt’s literary executor and last graduate assistant contacted Berkowitz and the college and suggested establishing a center in her name. For Berkowitz, “The Center is not dedicated to academic Arendt scholarship so much as nurturing conversations infused with her spirit – fearlessness, provocation, radical independence, thinking for oneself, and profound erudition.”

Hannah Arendt was born in Hannover, Germany, in 1906 and raised by her mother after her father died when she was six. At university, she studied with Martin Heidegger as his student and with professor Karl Jaspers. In the 1930s she was arrested and then fled Germany, worked in France rescuing Jewish youth, and after being imprisoned in a detention camp, she escaped and came to New York in 1941 where she wrote on themes of anti-Semitism and refugees.

In the 1950s, Arendt published The Origins of Totalitarianism and The Human Condition. She was the first woman to be named a full professor at Princeton. She also taught at several other prestigious universities, never accepting a tenure track position to preserve her intellectual independence.

Arendt is probably most known for her coverage of the trial of Nazi Adolf Eichmann in 1961 for The New Yorker. Eichmann was responsible for detaining and transporting Jews to concentration camps. She coined the term “banality of evil” to describe this ordinary man capable of extraordinarily heinous crimes. His motive was seemingly not hatred of the Jews, but devout dedication to the Nazi party.

According to the Arendt Center website, Eichmann was, “… a joiner. In his own words, Eichmann feared ‘to live a leaderless and difficult individual life,’ in which ‘I would receive no directives from anybody.’” An unsuccessful salesman, Eichmann found a sense of importance in the Nazi movement.

His desire to prove himself meaningful and needed made him unable to think critically about his role in the Nazi party. This drive gave rise to the “fearsome, word-and-thought-defying banality of evil.” While she sees him as evil and worthy of punishment, she also allows that his primary motivation for participating in evil was his inability to think critically about his belief in Nazi ideology, which provided him with significance and purpose in the face of loneliness and alienation. This blind dedication to a thought system without careful consideration is the face of evil in modern times.

Over the years, Berkowitz has grown the Center and, as its director, has become an Arendt scholar by necessity. He has guided the Center in its mirroring of Arendt’s commitment to knowing and understanding the world around us through our engagement with the political realm. “On every page, she is trying, as she said, to ‘think what she is doing’ and encouraging us to do the same.” Arendt, while capable of lofty abstract thinking, was dedicated to making the political in our lives intelligible and understanding its impact on our human condition.

A case in point is her distinction between objectivity and impartiality. Berkowitz explains that the essence of thinking about the political world is not objectivity – it’s impartiality. “For Arendt, there are no truths in politics. To be impartial is to express a plurality of ideas, understand a plurality of perspectives, and make a judgment about our own position. It is to seek to understand the world in all its complexity. It’s not about absolute or objective truth.” This is the crux of the Arendt Center’s work for Berkowitz – to present a wide array of opinions that try to make sense of the world. He believes, “This is especially important at this moment. We’re in a time that desires simplistic binary explanations that don’t exist.”

The Arendt Center mission is multi-faceted and serves three communities. The first is Bard students. The Center runs events attended by up to 700 students a year and employs nearly 20 students. It also houses the humanities center for the college. For Berkowitz, what makes Bard’s humanities program unique is its emphasis on ethics and politics, exploring how humanities inform those themes.

The Arendt Center also engages with the scholarly community through the Arendt Library, its journals, and fellowships, post-doctoral positions, and visiting professorships.

Last, it brings Arendt’s thinking to citizens through its annual conferences, its weekly newsletter entitled Amor Mundi (meaning for the “love of the world”) with a circulation of over 12,000 worldwide, and its weekly virtual reading group.

Taking book club to a whole other level

The virtual reading group meets on Zoom on Fridays at 1pm. Currently, the group is working its way through Essays in Understanding. With a regular attendance of over 100 participants each week, Berkowitz serves as a professor for the first segment, explaining critical concepts presented in the assigned readings, and an interlocutor for the rest of the meeting.

With the philosophical and historical foundation in place, he opens the floor up to questions and opinions from the group where he responds, challenges, and engages with attendees, who run the political, demographic, and geographical spectrum (about 30 percent of the group hails from South America, Asia, and Europe).

Berkowitz describes, “This group explores how Arendt’s work bleeds into the world we’re living in now and serves as a framework to understand it. While we are diverse in many ways, we’re missing people who may not have pursued higher education. Their voice is important in political discussions and explorations. This virtual gathering is not an academic exercise; it’s a citizenship exercise.” Citizenship is not legal membership in a country or state. Instead, it refers to political and ethical beings living with others and within the laws and rules that govern us all.

Love the world as you find it – then make it better

Arendt lived, thought, and wrote during the atrocities of the Nazi era. Berkowitz explains that “Arendt understood that we live amidst horrors in the world but that we need to love it, understand it, and resist what is bad.” Arendt’s philosophy was “one of action – and by action, she means to do something unexpected and original and create the spaces for private individuals to foster their own view and participate fully in the public sphere.”

Berkowitz observes, “Hannah Arendt and her work are going through a moment right now. Her work is profoundly meaningful and relevant to the current world. Our efforts at the Center reflect her spirit, and by remaining true to a lively engagement with the political realm, we’ve become a meaningful voice in the public intellectual world.” •

For more information visit www.hac.bard.edu. The Center has postponed its annual fall conference until spring 2021. However, on October 16, 2020 it is holding a pre-conference one-day webinar on the topic of “Revitalizing Democracy: Sortition, Citizen Power, and Spaces of Freedom.”