In an age of heightened climate consciousness, where political leaders and corporate enterprises have begun to feel the pressure of concerned citizens and scientists regarding the health of the planet, grassroot volunteerism has sprung up across communities everywhere. Residents in cities and towns across the country are coming together to identify and respond to the impacts of climate change. In Chicago for example, the city has planned or installed over four million square feet of green roofs across the city. The trees, plants, and soil used in green roofs provide shade and absorb far less heat than manufactured roofing materials while providing habitat for wildlife. In Texas, the city of Houston is preparing to deal with dangerously high temperatures, drought, flooding, as well as increasingly powerful hurricanes. In response to these threats brought on by unpredictable climate change, the city’s regional planning council has suggested that Houston restore and protect wetlands and other coastal habitats. Natural features like sand dunes and wetlands are able to act as buffers to storm surge, flood waters, and rising sea levels, and maintaining them in their optimal states would have numerous benefits for people and wildlife. In King County, Washington, the National Wildlife Federation(NWF) helped prepare a tool to help landowners understand the benefits healthy trees can have for climate change mitigation and adaptation. According to the NWF, “The Forestry Climate Preparedness and Response (CPR) tool quantifies and explains complex forest characteristics (i.e. total carbon load at a particular site) using an embedded Geographic Information System (GIS). It demonstrates how trees help landowners both reduce carbon pollution and prepare for the effects of climate change by reducing stormwater runoff and erosion and providing shade during hot summer months. The tool is being used by land managers across King County to make climate smart decisions when dealing with their forests. The National Wildlife Federation recently partnered with the Sustainable Urban Forests Coalition to present a webinar on climate-induced stormwater flooding, reducing thermal pollution in local waterways, and minimizing heat island effects, through use of the Forestry CPR tool.” 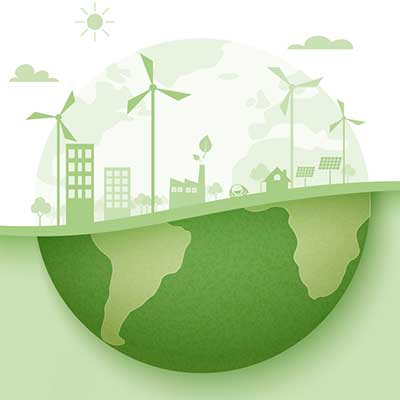 These, and other initiatives reflect the genuine ambition from folks across the nation to fight for future sustainability. In New York, climate preparedness has become a top priority for residents and lawmakers. Launched in 2009, Climate Smart Communities (CSC) is an interagency initiative of New York State. The program is jointly sponsored by several New York State agencies including the Department of Environmental Conservation (DEC); Energy Research and Development Authority (NYSERDA); Department of Public Service; Department of State; Department of Transportation; Department of Health and the Power Authority (NYPA). CSC supports local governments in leading their communities to reduce greenhouse gas emissions, adapt to the effects of climate change, and thrive in a green economy. According to the state, the benefits of participating include “leadership recognition, free technical assistance, and access to grants. Local governments participate by signing a voluntary pledge and using the CSC framework to guide progress toward creating attractive, healthy, and equitable places to live, work, and play.”

The CSC statewide initiative has laid its roots in our area as well. In 2018, the Town of North East and the Village of Millerton each signed a pledge to develop community-wide climate mitigation strategies and improve sustainability. As a result, Millerton and North East developed a volunteer committee dedicated to helping the municipality become a leader in climate activism. Dubbed the Climate Smart Task Force, members have spent the better part of four years initiating projects that will build environmental and economic resiliency for the residents and businesses of the rural Dutchess County town. CSC also partners with local and regional organizations including the Millerton Library, North East Community Center, Housatonic Valley Association, Cary Institute, Cornell Cooperative Extension, Webutuck Central School District, as well as neighboring towns, villages, and schools to work on climate sustainability projects together.

How to become a Climate Smart Community

Climate Smart Communities are much more than simple idealism; after taking a pledge, volunteers must be proactive in their efforts by completing specific, proscribed actions to achieve goals made by state lawmakers in order to receive funding for even larger initiatives. These include auditing municipal energy use and emissions, expanding recycling opportunities for visitors, protecting natural resources, installing LED streetlights, and involving the public. In addition, a registered Climate Smart Community achieves levels of New York State certification: bronze, silver, gold, platinum, americium, posthumanium. Attaining these levels of certification means that towns and villages like North East and Millerton are recognized as leaders in the effort to combat the climate crisis, and eligible to obtain state funding to improve local climate resiliency.

Millerton and North East’s CSC task force have worked together to put forth a focused, actionable set of goals in order to meet state standards including: Reducing the town’s greenhouse-gas emissions, conserving and protecting natural resources, educating and engaging the community about the climate crisis, inspiring local efforts to adopt solutions, building a climate-smart culture throughout the municipal government and the community at large and helping to find cost-saving green efficiencies for residents, businesses, and government. Thus far, New York touts 355 registered climate smart communities that house some nine million residents. 72 communities have achieved bronze status while eight have climbed their way to silver.

There remains little doubt among many New York residents that the coming climate emergency has arrived on our collective doorstep. Yet, at least in the short-term, concerned citizen volunteers are willing to step up and do what needs to be done. By working to dramatically reduce carbon emissions, task forces like that of the Millerton and North East CSC are working from the ground up to restore some semblance of order to the air we breathe, and the planet that we call home.

To learn more about the Millerton and North East Climate Smart Task Force, visit climatesmartmillerton.org. To find out how you can help your community become Climate Smart, visit  climatesmart.ny.gov.