College During the Coronavirus: Juggling University Life and a Global Pandemic

The global pandemic has left devastating impacts on the health, safety, and general well-being of society. We have all been forced to fully adapt and reevaluate our lives in the face of the coronavirus, and organizations like schools have had to adjust to ensure the protection of their communities. The virus’ impact on the college experience is particularly noteworthy in this case. These higher education institutions, wherein students would normally interact with each other and their professors with ease, have been significantly hindered as socializing and forming connections feels more taxing than ever. Despite this, some college students, including myself, were fortunate enough to learn on campus this past fall, even attending in-person classes. The methods through which students have been able to capture a more typical college experience, though, have been difficult to deal with. This was especially true for my friends and I, who had to garner our first impressions of life at Marist College through the lens of the pandemic. However, during this past semester we were very lucky: we were able to form our own “pod” and determine the most effective ways to overcome the virus’ many obstacles together.

Prior to even arriving on campus, plenty of college students like myself had to make severe changes at home to keep themselves and their families safe. While the overall goal of avoiding the virus has remained the same, my friends and I found that the routines we developed at home didn’t necessarily transfer to our newfound college lifestyles very well. My friend Avalon, who hails from Minnesota, notes, “It seemed like I had a lot less freedom when I was at school this fall than when I’m at home, which was probably because of a combination of the pauses, not having a car, and also not really having anywhere to go.” These pauses, which were imposed by Marist when the virus became more prevalent, meant that we were no longer able to attend classes in-person, and socializing spaces like the dining hall were closed; thus the reasons one had to leave their dorm at these points lessened significantly. Avalon’s roommate and another friend of mine, Emily, was able to recognize the importance of time without this pause. She explains, “Generally, my days felt quite normal: I was grateful to be able to study at the library and eat in the dining hall (while it remained open) so that I did not feel confined to my dorm room.” Thus it was especially nice to take advantage of the spaces the college still had to offer, and really make an effort to plan meals together when everyone was free. This sense of normalcy was accomplished as mask-wearing in public and being generally more aware of one’s surroundings became the norm for our group. My friend Lorah, who was more hesitant to go out when she was at home, describes, “I of course had to be a lot more conscious of leaving my room with a mask while at college, for I had a lot more places to go while on campus.” Lorah also had to deal with the added layer of being Celiac—allergic to wheat and wheat products—making her increasingly “conscious of how [she] handled [her] food and eating.” Luckily she had no issues regarding this, and she found that “Marist has excellent accommodations for people with allergies.”

My roommate, Julianna, has also observed a key change in her college life compared to what she experienced at home: the impact of attending classes. Similar to my pandemic experience during high school, learning was entirely remote for Julianna once the pandemic hit at the tail end of her senior year: “I didn’t go into class at all and I didn’t have any live online classes. It was a bit of an adjustment to come back to in-person classes.”

The academic experience as a whole, which is an integral part of college life, transformed to accommodate important safety measures. While Julianna appreciated that the primarily online coursework allowed her to pace herself, she explains, “For certain classes I felt that it would have been easier if I was able to interact with the professor more and have a more hands on experience.” At times when classes were able to be in-person, which typically occurred once a week for each course, we all appreciated having a more “normal” experience. Avalon notes that those classes not only got her “out of [her] tiny dorm room,” but that she “definitely [had] an easier time paying attention.”

Beyond our ability to learn in-person, we all found it difficult to establish connections in the online-based framework. Emily explains, “I thrive off of learning from the other students during discussions and this was difficult with less in-person teaching.” Furthermore, when it comes to reaching out to professors specifically, the lack of contact made the process tough to navigate: “During a regular year, I would have had no problem swinging by a professor’s office just to say hello and to get to know them but cultivating relationships in this environment was difficult to say the least.” Lorah elaborates, “I wasn’t able to go to in-person office hours because of the virus risks, and it felt intrusive to interrupt their Zoom office hours when people were actually looking for help within the course during that time.” On the whole, this reliance on the Internet and subsequent absence of true engagement made the workload feel distant; thus it was important that we made an extra effort to not only learn the material, but recognize when to take a break and maybe grab a bite to eat together at the dining hall. As Lorah puts it, “My experience as a student was affected by smaller things, but those smaller things added another layer to contend with in an already new and somewhat stressful situation.”

Division I athletes at Marist definitely endured these shortcomings. Julianna, who is on the swim team, and Avalon, who is on the rowing team, both struggled to attain the full benefits of their respective sports this past semester. As a result of the virus, both teams were hardly able to actually practice their sport. Avalon explains, “When we finally began practicing, it was only circuits and running—still not equipment (ergs or boats). Although for some reason we could use equipment inside of the gym for our lifts.” By the end of the semester, the rowing team was only “able to get on the water for 3 or 4 days before the campus went into lock-down for the rest of the semester.” Julianna expresses her similar frustrations regarding a near-complete lack of pool access the entire fall: “I felt cheated out of my first semester experience of college and being on a varsity team.” On the whole, Avalon and Julianna both stress that a higher testing rate for their teams would likely make getting in and on the water top priority. Despite their inability to compete together, the teams were still able to bond and Julianna found herself “able to connect with the freshmen on the team.” However, both believe that competing in a more regular setting would likely strengthen their friendships with teammates and contribute to their overall success.

It goes without saying, then, that the social aspect of college was just as—if not more—impeded because of the pandemic, and establishing a circle of friends as a freshman proved challenging. The five of us were really fortunate to have connected with each other on our dorm’s floor, but extending beyond our group was not only difficult, but a safety concern as well. “Some students socialized more than others, but often responsibility outweighed our desire to get to know one another as we attempted to keep our circles of exposure small,” Emily explains. “The first few days of the semester were flooded with introductions; nevertheless, few lasting relationships were formed due to our inability to socialize.” We all found it difficult to make new friends in this way, as connecting with people in our classes depended on many factors: what dorm they live in, whether or not they were being safe in their circle, whether they were willing to wear a mask and social distance; the list goes on.

However, making plenty of plans to spend time with each other and other people through safer activities—taking a walk down to the river or across the walkway, going to get a coffee, eating lunch on the green—eased the struggles the pandemic caused significantly. It was a very challenging and “different” semester. Yet we remain grateful for the friendships we were able to create and we look forward to our second semester with hopeful excitement! 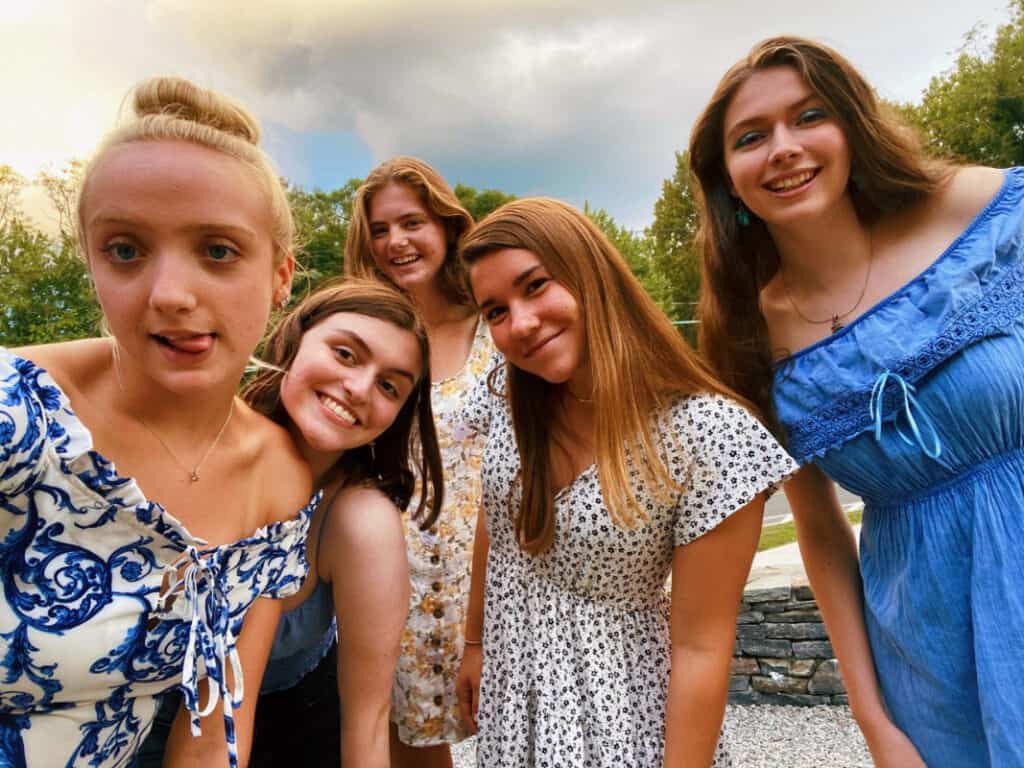 Going out for a COVID-friendly bite to eat within our ‘pod’ has been a great way for everyone to bond while still staying safe. Pictured from left to right: Julianna, Lindsey, Avalon, Emily, and Lorah.