As Connecticut’s Department of Energy and Environmental Protection (DEEP) pushes forward with plans to cut down centuries-old trees at Housatonic Meadows State Park in Sharon, CT, concerned citizens and public officials are raising questions about the decision-making process that has already allowed for some 200 to be felled.

Despite furvent requests for a stay of tree removal at the park -many of which include 200-year-old-oaks- DEEP began cutting on January, 11. In response, members of the HMPA staged a rally two days later where an exuberant crowd of concerned citizens gathered with signs and chants to protest what they feel is DEEP’s lack of consideration for the trees and wildlife that depend on them. Michael Nadeau of Sharon, CT, a CT-licensed and Certified Arborist for more than forty years, has taken up the outspoken cause of the HMPA saying, “The Department of Energy and Environmental Protection (DEEP) is entrusted with safeguarding our environment. What has taken place at Housatonic Meadows State Park (HMSP) last week is in direct contradiction to their responsibilities.”

On their website, Connecticut’s General Assembly House Repulican Caucus wrote that DEEP, “provided Senator Miner with some related documents and agreed to hold a virtual public hearing that was at his request. During that public hearing, DEEP Deputy Commissioner Mason Trumble accepted responsibility on behalf of the agency for its lack of transparency and a process that needed significant improvement.” In a follow-up statement, Senator Miner said, “It is now clear that DEEP had no intention of considering any of the testimony offered by highly- qualified, equally-credentialled members of the public in light of its plans to resume hazard tree removal. They have no plan for replanting, bank stabilization, damage mitigation to endangered species in the area and no plan to mitigate damage and disruption in the area.”

For their part, Mr. Nadeau and the other members of the HMPA have been on a mission for more information themselves including reaching out to DEEP. “Internal DEEP documents obtained through a (Freedom of Information Act) request clearly elucidates the miscommunication, mismanagement, and closed-minded approach to classifying a tree as a “hazard” to the public,” said Nadeau. “After the trees had been removed an esteemed group of arborists, biologists, and forest ecologists determined the trees were substantially sound and could have been preserved using standard aboricultural practices. We notified DEEP of our findings and tried to get them to stop killing the trees but they would not.”

Mr. Naduea states that the HMPA’s long-term goal is to fundamentally change the ways DEEP protects the environment. “…, DEEP does not employ even one professional hazard tree assessment arborist, who should have had jurisdiction to make these kinds of decisions, not a Parks Department employee with no arboricultural or forestry credentials,” he says. “Better communication and collaboration between departments that have valid input in such decisions; and an overall revision of the State liability laws that necessitate the removal of allegedly hazardous trees.” 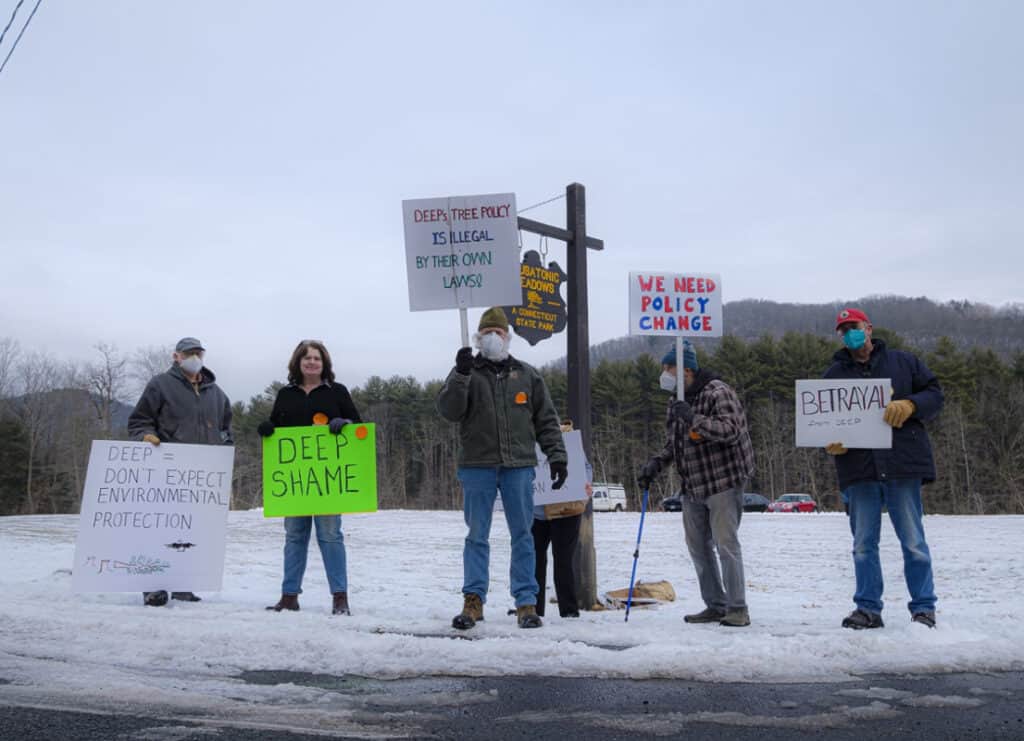