In Columbia County, NY, officials are continuing their pursuit of purchasing more COVID-19 diagnostic testing kits this week. While recently several medical facilities and pharmacies have begun to expand onsite testing in Columbia County, Chairman Board of Supervisors Chairman Matt Murell said, “These are most often tests involving a blood draw and are billed through insurance or otherwise require a payment on the part of the individual.” Murell continued, “Testing that involves a blood draw is known as being far more reliable and accurate than that which can currently be achieved through a testing kit. The reason we have not yet ordered antibody test kits is because of the accuracy issues. As a county, we do not have the ability to conduct tests involving a blood draw.” In the meantime, the County Department of Health is working to identify testing kits that meet the standards that will yield consistent, solid results and have received the go-ahead under an FDA Emergency Use Authorization.

As a result, the county is planning the purchase of more diagnostic testing kits. However, County Department of Health 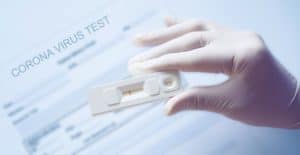 personnel are investigating the most accurate and reliable antibody testing kits for use in the county. There are still many in the medical and science fields questioning the accuracy of antibody test kits, and if a person actually has immunity even if they have COVID-19 antibodies. “Many individuals from the county have contributed hard-earned dollars toward the purchase of the testing kits, and for the county to spend that money in a reckless fashion would not represent a good use of those funds. We will be ordering more kits when the county Department of Health is satisfied the right test for us is available,” Chairman Murell said.

Meanwhile, four of the five nursing facilities located in Columbia County are conducting coronavirus testing, according to Columbia County Department of Health Director Jack Mabb. On Tuesday Mabb said, “Four of them are working with us.” Mabb reported that as of Tuesday, Livingston Hills had tested 92 of its residents and the bulk of its staff, while the FASNY Firemen’s Home has completed testing on one wing, as well as the bulk of its staff, all with negative results. Director Mabb explained, “Pine Haven had one positive test result from yesterday, along with another death of a resident. However, the resident who died was transferred in just the day before.” At The Grand at Barnwell – testing of both residents and staff continues. Mabb said, “We’ve had nothing but cooperation from them. I applaud the folks at the Grand – they have a horrific situation on their hands, but they’re courageously working to get to the bottom of the situation.” As for the Whittier Rehab & Skilled Nursing Center in Ghent, NY, Mabb explained, “(Whittier) is the only facility not working with us. Initially, we were told by someone at the facility that they wanted 180 kits, however, later someone called back to refuse them.”