Glaciers have stopped growing. Over the past century, glaciers across the globe have been retreating in the wrong direction. According to the National Snow & Ice Data Center, “Over 90 percent of the measured alpine glaciers in the world are retreating, in almost every major glaciated region” (nsidc.org). The Okjökull Glacier in Iceland is the first of its kind to be officially designated as dead ice. Just a century ago, the glacier in western Iceland spanned nearly six miles of mountainside and stood a firm fifty meters thick. Today, the ice covers less than one square mile and has lost its classification as a glacier altogether. A “memorial” plaque dedicated to the former behemoth reads, “This monument is to acknowledge that we know what is happening and what needs to be done. Only you know if we did it.” Because the “Ok” glacier has stopped accumulating more mass each year and has lost the ability to move under its own weight, the remains are officially known as “dead ice”. An article from The Guardian’s website indicates that the Earth’s temperatures are rising faster in its northern hemisphere, “The far north of the globe has been warming twice as fast as the rest, helping this June become the hottest ever recorded.” (theguardian.com). Memorials are more than plaques dedicated to those who have passed away, they are meant to remember as well, the loss of Iceland’s Ok glacier is a reminder that our earth is finite, and only we know if we are doing it. 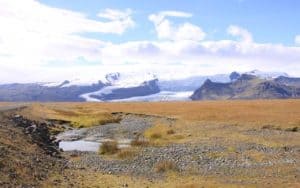 Iceland has many glaciers, most of which are shrinking, with some sadly disappearing