Perhaps Oscar Wilde was correct. “Life imitates art far more than art imitates life.” Should one be in need a living example, please welcome Richard Griggs. An artist who finds elegance and beauty where others see pieces that should be consigned to the local transfer station, Griggs creates pieces that take on new and whimsical dimensions.

And, as far as the life/art continuum, his own story is very much an illustration of the immense value of reconstruction. By any common measure, Richard Griggs should have been a name from distant memory long ago. Rather he is a vibrant, insightful, somewhat cryptic occupant of a house of his own modification and construction on Cream Hill Lake in Cornwall, CT. Enter Richard’s world and be prepared to be both captivated and bemused.

Born in New York, Richard moved to Cornwall when his father, a former vice president at Merrill Lynch, retired to a more bucolic life. The quirkiness of Richard may, in fact, be an inherited trait, as his father, leaving the pressurized environment of high finance found an early retirement reimagination … as a school bus driver in the town.

With an artistic drive matched with a flair for the dramatic, Richard graduated from Boston’s Emerson College where he focused on theatrical set design and ended up with a job as stage manager in the burgeoning dinner theater world at the legendary Chateau de Ville in Framingham, MA. “Bob Hope would play the Chateau for a full week,” Griggs remembers, along with the recollection of the public needle Hope gave him on his closing night. “I’d do his introduction from backstage, reading what his road team would give me each night. On the final night, I asked Hope how he wanted to be introduced and he rattled off the introduction as he wanted it. When I parroted the words back, Hope took the stage and shared with the audience, ‘Well, the kid finally got it right.’”

When dinner theaters began to fade as costs rose and income didn’t, Richard headed west to Los Angeles. “My first full-time gig was working with the legendary theatrical rock group, The Tubes.” As an electrician and occasional stage performer, Griggs became a lasting part of the entourage that made The Tubes concerts massive theatrical productions.

Then, there was television. Touring takes its toll on everyone involved, so when the opportunity presented itself to become part of a Disney Channel television program, Richard bid the road farewell. As a “grip” on Dumbo’s Flying Circus, Griggs translated his electrical and carpentry skills into the intricate world of film and video production.

The combination of puppetry and live actors was intriguing and when the cult classic Alf offered Griggs a spot on their production crew, he joined Paul Fusco’s team and became, in his words “one of the trap door rats” that were kept busy managing the stage entrances for the alien puppet from underneath the stage.

All seemed like it was moving in the right direction for Griggs as his place in the production world of Los Angeles seemed set. That was until the fateful day when, out for a bicycle ride in his San Fernando Valley neighborhood, Richard Griggs was hit by a car. Instant, life-changing experience that would require a staggering amount of reinvention.

He was hit hard … so hard, in fact, that he was slammed into the windshield, then catapulted through the air to crash into a tree. Surgery was lengthy and intricate as Griggs had a broken back and broken pelvis and had suffered serious traumatic head injury.

Recuperation and physical therapy were excruciating and long. “Not only did I have to learn how to walk, again, I had to learn how to speak … how to do simple daily functions. I decided that when I was strong enough, I wanted to go back home,” recalls Griggs.

And, so he came … back to Cornwall and the serenity of the lake and the Litchfield Hills. Talented and imaginative, it was not long before Griggs was invited by long-time family friend Tim Prentice to join the team of art constructors who have brought Tim’s imaginative designs into artistic reality.

One professional bonus to working in the Prentice workshop was the proliferation of bits and pieces of the materials required to fabricate the enormous air-capturing sculptures. With permission and blessing, Richard began to see the trimmings and cuttings as more than refuse for the recycling center. They became elements in his own creations – gentle mobiles that move lyrically in the air or fantasy creatures that can dot the landscape.

“Found art” is an entire category of sculptural invention, and “found art” has become Richard’s specialty. Obsolete computer hard drives, plastic inserts designed to hold pieces in place while shipping then discarded, beer bottle caps, metal discs, pieces of abandoned machinery and wire … lots and lots of wire. Named by the French objet trouvé, the individual pieces of sculpture are created by utilizing objects originally purposed for other uses, not the creation of art. One of the most prominent artists who made extensive use of found art was Robert Rauschenberg who has been famously quoted as saying “You begin with the possibilities of the material.” That captures Richard Griggs’s creations and their infinite possibility.

The love of his life

One of the artifacts of his time in California on the Alf set is Elenore, a car that sits nestled under a tarpaulin in the garage beneath Richard’s studio. It’s a 1963 Ford Falcon that he purchased from “Alf’s left hand,” puppeteer Lisa Buckley who, with Paul Fusco, operated the puppet during production.

It was one day when he was out driving his prized Falcon that Griggs spotted Bianca Langner walking alongside the road. Conversation ensued, followed by other conversations and adventures and, ultimately, marriage. Bianca is the proprietor of West Cornwall’s Wish House and the Souterrain Gallery. Together, the couple has become deeply immersed in community life, sponsoring The Original Cornwall Farm Market that runs on weekends through the growing season, establishing and managing a very active Facebook page for the community and being engaged in a variety of volunteer community activities.

It is in The Wish House that Richard’s fanciful creations … his “things” … can be seen and appreciated … and acquired by those with a sense of discovery and whimsy. 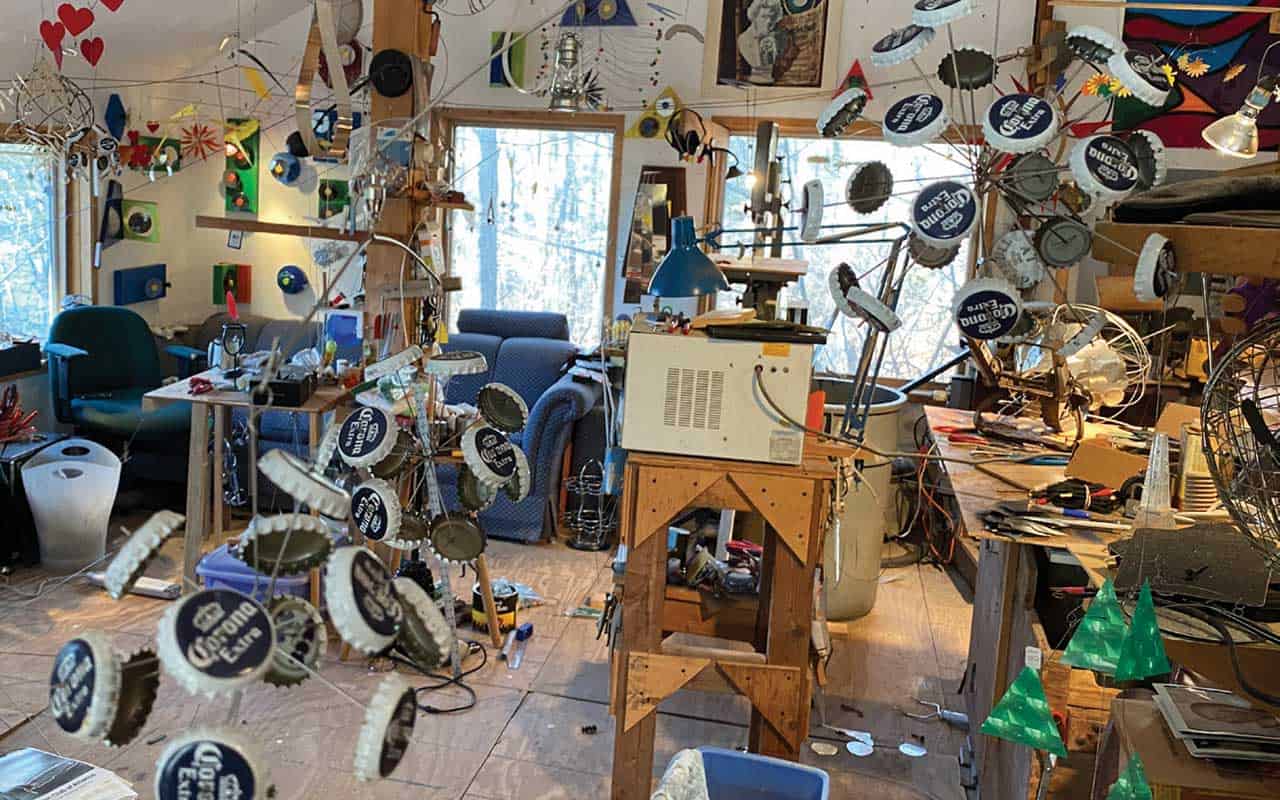 For more insight into the artistic mind of Richard Griggs, visit his website at rgthingmaker.com. There are several videos that will engage and entertain … just like the “things” that come from the studio of Richard Griggs.