These twin developments are the most visible of many milestones the Millbrook Community Partnership (MCP) already has achieved in realizing its vision of creating a 32-acre park on the derelict Bennett site as a green gateway to the Village and transforming the Thorne Building into a vibrant community center.

Each building on the Bennett Campus, except for the centerpiece Halcyon Hall and the old Hale House, will have asbestos removed and then be demolished. So far asbestos abatement has been completed in five buildings, and demolition has begun on the steel frame and brick Science Building.

Halcyon Hall has deteriorated to the point that it would be unsafe for workers to enter the building and perform the asbestos abatement work, so beginning in December the entire building structure will be abated as a controlled demolition, in conformance with New York law governing demolition of buildings with asbestos remaining in place. 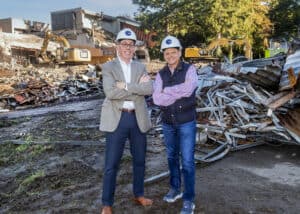 Oakleigh Thorne (right), President, and George Whalen (left) Treasurer, of the Millbrook Community Partnership stand in front of the demolished Kettering Science Center on the campus of former Bennett College. MCP plans to turn it into a 32-acre park.

Hale House, a wood framed structure, has been fully abated and is being preserved for potential use as a visitors’ center. It is anticipated that all demolition on the Bennett site will be completed by March, and that construction of the park will begin next spring.

Asbestos removal at the Thorne Building, a grand Beaux Arts structure at the head of Franklin Ave., has also begun, and is anticipated to be completed in December 2021. The abatement represents the first phase of renovation of the 125-year-old building, which will ultimately be converted to a Community Center that will house a performing arts center, technology center, gallery space, and culinary arts center, among other offerings.

The second phase of renovating the Thorne Building, which is listed on the National Register of Historic Places, is not expected to begin until adequate funds have been secured to complete the project.

Both projects have been undertaken by the Millbrook Community Partnership, a non-profit entity that recently acquired the Thorne Building from the Village of Millbrook and received gifts of the Bennett properties from the Millbrook Tribute Garden and the Thorne family.

These projects come as the culmination of a series of public meetings over the past four years to determine the best uses for the two abandoned facilities. The MCP estimates that the demolition, abatement, renovations, and park construction will cost approximately $20m.

“The demolition of the Bennett College buildings, which have long been an eyesore, and the beginning of asbestos abatement work on the Thorne Building mark a significant and exciting moment as we move forward,” said MCP President Oakleigh Thorne. “Together, the new Bennett Park and the renovated Thorne Building Community Center will create a vibrant platform for MCP and other local non-profit organizations. We plan to deliver a variety of indoor and outdoor, civic and cultural programs that will benefit the Village of Millbrook, the Town of Washington, and all of central Dutchess County.” 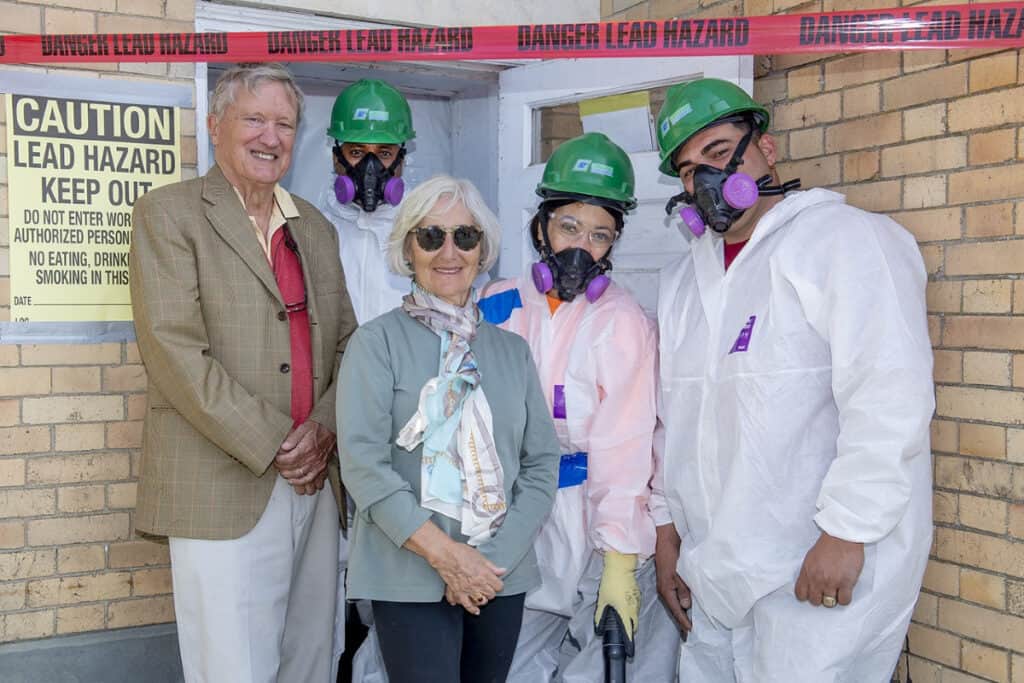 Charles Pierce (left), a member of the Board and Ann Gifford (right), Secretary, of the Millbrook Community Partnership stand with members of the team working on asbestos abatement at the Thorne Building. Plans are to turn it into a Community Center.