Did You Know This Former Craryville Resident: “Superman’s Friend?”

For decades starting in 1934 Carroll Rheinstrom and his wife Irene had a huge farm in Craryville. Actually it wasn’t a farm because most of it was woods. It started with just a dozen acres, but over the decades, thanks partly to Irene’s work as a real estate agent, they expanded it to nearly 1000 acres. In the end, the couple willed their place off Rte. 7 in Craryville to the Audubon Society.

Rheinstrom, with residences also in New York City and Block Island, had friends but few knew the details of his business activities. Not that what he did was illegal. Beginning in 1950, he represented DC Comics by selling its licenses to foreign publishers in Europe etc. However, perhaps because comics were considered lowbrow, Rheinstrom was tight-lipped with most people about this.

I first heard bits of amazing stories concerning Rheinstrom, including some about his philanthropy in Columbia County late last year. The next thing I knew I was researching a biography of this “friend” of Superman. Why was he “Superman’s friend?” Well, the Superman comic books, 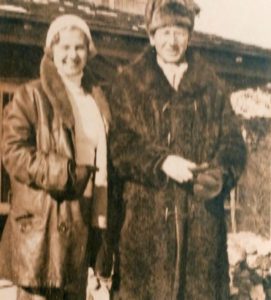 which started the whole comic book industry in 1938, became Rheinstrom’s biggest seller, in the process making him very rich.

For many years the Rheinstroms traveled the world finding more and more publishers for Superman and other comic books. In Spain Superman was called Ciclon; in Italy he was The Nembo (cloud) Kid; in Germany, Clark Kent became Klaus Kent. But for many years, wherever Superman comic books appeared, they were compelling.

My research has uncovered some remarkable stories. For a while an anti-comic book campaign initiated by an American psychiatrist in the late 1940s threatened the comic book industry’s very existence. Rheinstrom first brought Superman comic books to Spain during the years of the Franco dictatorship. This quickly led the regime to mount an anti-Superman campaign in the newspapers. The Franco regime did not want young Spaniards to be reading about a fictional hero dedicated to “Truth Justice and the American way.” So Superman became Public Enemy Number I in Spain.

Apart from these research results, I am trying to locate people who knew Rheinstrom who died in 1994. One person on Block Island replied to my earliest inquiries, but only anonymously, precluding a follow-up interview. “He built the small house that Zarella sold for 3 million,” the man stated. “He was remembered for the “throne: (toilet seat) in his bathroom. “

If you knew Rheinstrom, contact me via at memrevs@gmail.com , or at 55 Lakeshore Drive Copake, NY 12516