Now that Memorial Day has passed, many folks in the Hudson Valley consider now to be the unofficial start of the summer season. This typically means the beginning of a season of discovery for travelers and lifelong residents alike. Warmer temperatures combined with the lush and vibrant landscapes of upstate New York help open the gateway to popular events, getaways and perhaps most prominently, the historic and scenic attractions that tuck themselves within the valley itself. Today, the seemingly ceaseless nature of change brought on by the spread of COVID-19 in New York has touched nearly every aspect of our time-honored summer traditions. The same that was true for small businesses in March and April, has now challenged National and State Parks as well as historic sites across the area. In the face of adversity, nearly every industry has adapted and in Hyde Park, NY, one of the area’s most attractive gardenscapes, and one that is steeped in American history, has opened its virtual gates to all comers.

Not only is the Beatrix Farrand Garden at the Bellefield Mansion historically significant, it is a testament to the efforts of a dedicated 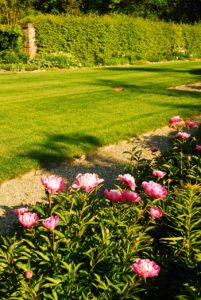 group of modern gardeners and the stewardship of the National Park Service. Bellefield Mansion is part of the Roosevelt-Vanderbilt National Historic Sites, and the Beatrix Farrand Garden Association is a formal partner. “It’s been a really challenging couple of months,” says Beatrix Farrand Garden’s resident Horticulturist Karen Waltuch, “but (we’re) glad that everyone is still doing their best to keep life moving forward.” Acquired by the National Park Service in 1976, the Bellefield Mansion was remodeled by famed architects McKim, Mead and White for Sen. Thomas and Sarah Newbold between 1909 and 1911. Beatrix Farrand, cousin of Thomas Newbold, was employed to design and implement the hard-scape and garden at the estate during the time of that remodel. It was originally used by the Newbold’s as a Spring and Autumn seasonal family garden. Farrand’s design was used as a family space by the successive families, although it went largely unmaintained from the 1970s until a group of local residents recognized the significance of the landscape and began an effort to bring the garden back to life in 1993.

Much like Beatrix Farrand herself, whose landscape and gardening work helped to define the American taste in gardens throughout the first half of the 20th century, the current keepers have redefined how to experience gardenscapes in this new virtual world. On Tuesdays, Karen hosts a guided garden tour live on Instagram and on Fridays, she has begun producing a short garden-topic video every Friday that is uploaded on the garden’s YouTube channel entitled Farrand Friends Friday. The garden is also hosting an online-only plant sale that starts this Friday, May 29th and ends with pick-up next Saturday, June 6th. They will be exclusively selling plants that have been grown in the greenhouses on site. The website will go live this Friday morning, and is at this point, the only fundraiser they will be hosting this season.

Perhaps most significantly, the Beatrix Farrand Garden Association has produced a documentary titled Beatrix Farrand’s American Landscapes that has recently been picked up by PBS. The new documentary, produced by Insignia Films and directed by Stephen Ives, follows award-winning public garden designer Lynden B. Miller as she sets off to explore the remarkable life and career of America’s first female landscape architect—Beatrix Farrand. Through the documentary, Miller journeys to the iconic gardens, engaging designers, scholars and horticulturists in a spirited dialogue about the meaning and importance of this ground-breaking early 20th-century woman. The film’s first screening will be on WNET on June 1st at 10pm. “There are a ton of other stations around the country that are continuing to pick it up,” says Waltuch. “(The film) will be great for people who are stuck at home!”

To view the latest episode of Farrand Friends click here

To participate in the online-only plant sale that starts this Friday, May 29th and ends with pick-up next Saturday, June 6th. Visit the website when it goes live this Friday morning at beatrixfarrandgardenhydepark.org/plantsale