Lee Sohl has been looking after animals in the Litchfield Hills for thirty years. For Main Street’s annual animal issue we wanted to find out what Animal Control Officers do and learn about the rewards and challenges of the position.

How would you describe your job?

Officially I respond to citizens’ concerns regarding problems with all domestic animals. People contact me directly by phone or email on an as needed basis for lost dogs, advice, and complaints. I’m available on a 24/7 basis. When I’m teaching I may not answer right away but if it’s necessary I go out on calls on holidays and birthdays. Any resident of Salisbury, Sharon, or Kent can call me at (860) 488-6476, but don’t call me about bears. Wildlife is controlled by the Connecticut State Department of Energy & Environmental Protection (DEEP). If there’s an immediate emergency call 911.

The most satisfying part of my job is finding the owner of a lost dog. All dogs are required to wear a license and a rabies tag. If I have the license number I can access the owner’s information from my phone and can notify them immediately if someone has found their dog. If there’s no identification I post on Facebook, make phone calls, and check on social media. Usually I can track down the owner in a day or two. Probably the biggest part of my job is working with neighbors to solve animal issues whether it’s barking or dogs trespassing on the property next door. I view myself as an educator and only give tickets in extreme situations.

I have been the Animal Control Officer in Kent, CT, for 30 years, and added Sharon and Salisbury fairly recently. From Kent it’s a long drive to Salisbury, but it’s near where my vet, Dr. Cannon, has her clinic in Millerton, NY. I’m there all the time because my husband Jim and I have nine dogs plus three parrots.

How many calls do you get? Is there a busy season?

Let me check my records. This January I had 15 calls, but in July and August it can be double or even triple that. As soon as the weather gets warmer I start getting calls. The busy summer fits in really well with a teacher’s schedule. There are 835 licensed dogs in the three towns. That’s a little down because of COVID.

How did you become an Animal Control Officer?

In Kent the First Selectman approached me thirty years ago. Sharon asked me six years ago and then Salisbury.

What are the qualifications for being an Animal Control Officer?

All new Animal Control Officers are required to take an 80-hour training course as well as six hours of continuing education every year. But the most important qualification is to love animals and have experience working with them. While larger towns have full time ACO’s here in the Northwest corner it’s a part-time job.

At one time, Jim, my saintly husband, and I owned over 50 animals – everything from dwarf rabbits to llamas, dogs, guinea pigs, reptiles, a blind goat, and parrots. From 1988 to 2008, when the local paper ceased to exist, I wrote a weekly column with pet advice and funny stories about being an Animal Control Officer like retrieving a parakeet from behind a refrigerator.

What has changed over time?

Sixty dogs a year were placed in the pound when I first began in Kent as an Animal Control Officer. Last year there were only 25 dogs that ended up in the pound in Salisbury, Kent, and Sharon together. I think people have become much better trained, and social media makes it easier to find owners.

Whom do you report to?

I‘m pretty much on my own, but report my activities every month to each town’s First Selectman. Every year I provide a summary for a town’s annual report on the number of dogs impounded, number of inquiries which includes lost dogs, animal bites, and tickets issued. For larger issues like animal cruelty, I rely on the expertise of the state Animal Control office.

Could you describe a typical call?

Someone calls to say that there’s a dog that has been hanging around all morning. I ask if they can see a tag, and if they can safely read it, to give me the information. Sometimes I can find the owner immediately on my cell phone and tell them where the dog is. Or I might ask the caller to take a photo of any lost animal on their cell phone and send it to me. I’ll post it right away on Facebook. If someone sees a dog running beside the road and calls me the chances are that it won’t be there by the time I arrive. I never recommend that people try to restrain a strange animal or bring it into their house. If the dog is in an enclosed outdoor area I will grab some meat from my refrigerator to lure him, use a leash and put him in the back of my Mini Cooper and take him to the pound. If owners would only call me when a dog is lost, I could get them together much quicker.

How long does a dog stay at the pound?

A dog can stay at the local pound for a week after I publish finding him in a daily newspaper. If no one claims him I try to find the right home for him. Only occasionally do I have to request assistance from a shelter. Jim and I have given a home to a few of these unclaimed small dogs.

How often do you come across mistreated animals?

This happens very rarely because the people who live in our area are animal lovers and responsible pet owners. It’s not like the south where many of our rescue dogs originate. If someone is struggling to care for their pet, I have, on two or three occasions, suggested that they find a better situation for it. More often, I make suggestions that will help them keep their pet.

What’s the biggest problem from your perspective?

The biggest problem, especially this last year, is newcomers and visitors from out-of-town who don’t understand that being in the country does not mean letting your dogs run free. We have “no roaming” laws. Dogs can be alone outside on their own property, but must be under control of their owner off property, ideally leashed.

Do you only deal with dogs?

Dogs are the biggest part of the job, but you can call me about any animal. For example we found a home for a lost chicken. Once my husband Jim, who has officially been appointed as my unpaid assistant, talked an escaped macaw out of a tree by promising him peanuts.

How much is a ticket? Where is the dog pound?

There is a $15 fee for roaming on someone else’s property that goes up to $92 for repeat offenders. The charge for nuisance barking which has to be substantiated by the complaining party is $75. The owner can either admit guilt and pay the ticket or go to court. Unlike State Troopers I don’t have to be there. There are facilities at every town garage to keep roaming or lost dogs. In Salisbury we charge owners $30 a night if the owner knows the dog has been impounded and doesn’t pick it up right away.

What is your view on no-kill shelters?

Most of our local shelters, like the Little Guild in Cornwall, CT, will only take in animals they feel they can place, but there have to be shelters that will accept any dog. Sometimes because of genes, abuse, bad owners or health, dogs cannot be safely rehabilitated and must be euthanized. It breaks the heart of the shelter’s employees who have watched over these animals for months. It’s hard to weigh the quality of life for these dogs living in a cage with a run versus being put down. Fortunately Animal Control Officers are not allowed to euthanize animals. One of the saddest cases I have experienced was a large Cane Corso, a type of mastiff that is fiercely loyal to its owner, which was chained to a tree a mile from the road. Many people wanted to adopt him, but eventually we found someone who knew what they were doing with a large, protective dog of unknown background.

And what’s your opinion of designer doodle dogs?

I think that they are being sold as designer breeds when there are great mixed breeds already available and looking for homes that aren’t selling for thousands of dollars. Puggles are an example – a mix of a pug and a beagle – you’re not getting the best qualities of either breed.

All puppies are adorable and it’s hard to know what they will be like as an adult if you don’t know who the parents are. My preference is to adopt an older dog – they bond quickly and you know what you’re getting.

What’s your advice on feeding a dog?

I’m a dog food snob and never buy feed at the grocery store, only at pet food stores. I look at the ingredients carefully and research quality on the internet. We never feed our dogs table food or biscuits. Food has to be matched to the age and type of dog.  And I don’t believe in fat dogs. When we keep a dog for a friend they usually return home looking thinner with a shiner coat.

Do you have a favorite book or movie that influenced your love of dogs?

When I was a kid I read Albert Payson Terhune who wrote over 30 books about dogs, especially collies. The stories took place before I was born but I’ve always been attracted to the early twentieth century. I also loved Harry James the band leader from the 1940s. He’s why I became a trumpet player. • 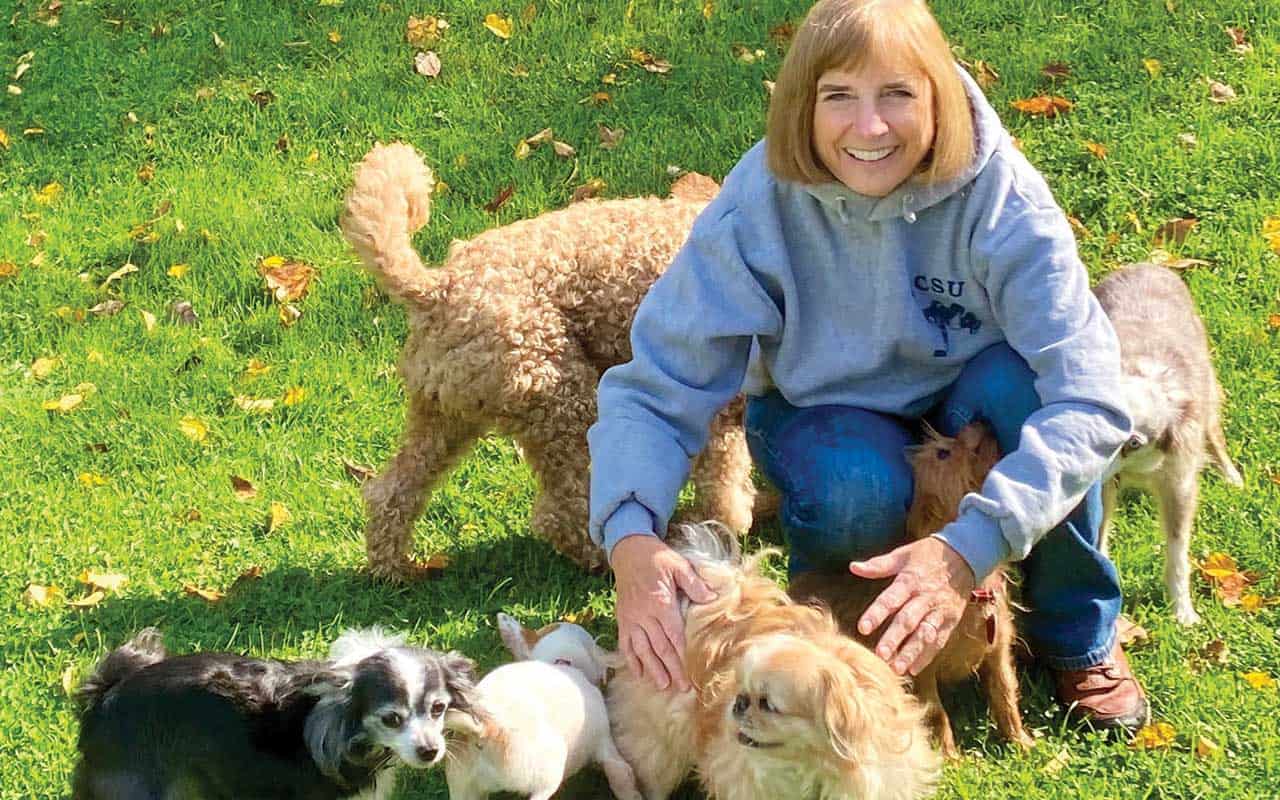