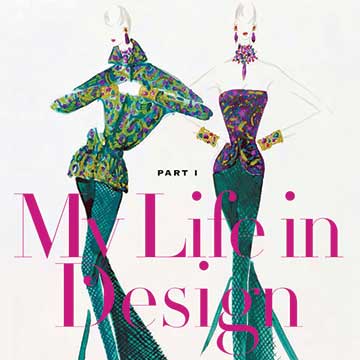 Seated on a comfortable sofa at Weatherstone, her home in Sharon, CT, clad in simple navy cotton trousers, gingham shirt, flat shoes, her hair in a ponytail, it’s hard to equate this Carolyne Roehm with the one from her former life.

Act one: The couple of the decade

It was the 1980s, the height of conspicuous consumption. Carolyne and her second husband Henry Kravis were the “It Couple” of the decade. When they wed, GQ pronounced the marriage, along with that of Charles and Diana, as one of the twenty weddings of the century. Those were heady times. In addition to living the high life, Roehm had forged a successful career as a fashion designer, creating clothes for women like herself – tall, rich, thin, and very social.

It was in 1973 that Carolyne Jane (Janie) Smith arrived in New York from Kirksville, MO, with $600 and five suitcases of clothes, ready to take the fashion industry by storm. Having majored in fashion at Washington University in St. Louis, Roehm was exposed to fashion world professionals who came to lecture about the business. That is how she met Victor Costa, known as “king of the knockoffs,” taking brand-name designers’ creations and making more affordable copies, which sold like hotcakes. He offered Roehm a job as his assistant.

When that offer was rescinded after she had arrived, Roehm found herself working for Kellwood, a polyester sportswear company. But her goal was to work for Oscar de la Renta and she eventually did – for ten years. It was during this time that she met and married her first husband, German chemical heir Axel Roehm, and went to live in Germany. When the marriage failed after a year or so, she was back working with de la Renta.

A serendipitous introduction to Henry Kravis led, not only to seed money to start her own fashion company, but to romance and her second marriage. Roehm’s dream of having her own clothing line had come true.

She was designing clothes for women who led the same high profile life she did and they all began wearing them. She was an example of someone who had it all – a rich husband, a successful business of her own, multiple houses to decorate and where she entertained in the most glamorous of surroundings with impeccable table settings and exquisite food. Yet, because so much of it was written about and examined by the public and the media, it was not surprising that it didn’t last.

As happens with so many fairy tales, tragedy struck and Roehm’s world began to collapse. Kravis’s 19-year-old son from his first marriage was killed in a car accident in Colorado.

At about the same time Roehm hired a high-profile fashion business professional to help run her business. The goal was to be able to manufacture Carolyne Roehm clothes in Europe, which would mean more travel for her. She was reluctant to be away from Kravis after the tragedy, but their marriage had already begun to unravel. In 1993 they were divorced and Roehm moved on to the next phase of her creative life.
“I needed to get away from New York,” she explains. “There were too many memories and I didn’t have a business anymore and I needed a change. The Metropolitan Opera no longer wanted me on their board – they wanted the new Mrs. Kravis. Everything that could go wrong went wrong. A lot of our possessions were going to auction. Henry kept everything except this house, which I treasure so much.”

Roehm has always loved flowers. And what better venue than Paris to learn about them? It was the perfect place to escape the headlines about her divorce and to reinvent herself.

“Growing up on a farm in Missouri, I was always around flowers,” Roehm. “I love them and I love gardening and I wanted to learn more. So I went to Paris to really study the aesthetic of arranging and working with flowers. My endgame was to make beautiful bouquets and bring flower arrangements into the house.”

She was fortunate enough to work at one of the most famous flower shops in Europe – Moulie Savart. As with everything Roehm does, she studies intensely and then puts to use what she has learned. Returning home she decided she wanted to do a book.

Not just any book, but one that would pay tribute to flowers and in which she could share what she had learned in Paris. She returned to her beloved Weatherstone and used her own gardens for further inspiration. Then, working with premier photographers she began putting together A Passion for Flowers.

I have to say, in full disclosure, I had the honor of publishing her first book at HarperCollins. Generally an author and her agent will come in with a typewritten proposal and are prepared to discuss their concepts with an editor. I certainly knew who Carolyne Roehm was but had no idea she knew anything about flowers – or about publishing for that matter. But she never ever does things halfway. When we finally met over her book idea, she brought with her the most sensational page spreads with full color photos and text to show exactly what she had in mind. She had done her homework and knew what the end product should look like in terms of quality printing and paper and overall packaging. And there was no compromise. She did indeed get what she wanted.

In the era of fast printing in Hong Kong, Roehm’s first book was printed in Italy on high quality paper. We pulled out all the stops. And it was indeed worth the effort. A Passion for Flowers was an instant success and sold far beyond expectations. Roehm traveled the country giving talks at garden clubs, luncheons, signing books, and sharing her experiences. It was beginning of the next phase.

Roehm and I published four more books at HarperCollins and then she went on to publish more spectacular books on gardening, entertaining, gift wrapping and presentation, interiors, and on her passion for blue and white. With each book she learned more about the process and was an eager student. In her last book At Home in the Garden, she did all her own photography. And while she didn’t start out wanting to teach, she has done just that by putting together remarkable tomes about subjects that people are eager to incorporate into their own lives. She has indeed become a force in the world of gardening, design, and entertaining.

While she was in the fashion business over thirty-five years ago, she has never written about that part of her life.

“I’ve thought about writing this book for a long time,” Roehm says. “And then finally I just said I am going to do it. I started working on it, but it’s been very hard for a variety of reasons. I had boxes of clippings from the ‘80s and ‘90s; there was so much to go through. And because Henry and I were in the public eye so much during that time I had the social, the private, and the professional parts to relive. I found it depressing to go through all of it. It’s a very personal book and I wasn’t sure I could actually go through with it.”

But she did. And in Design & Style: A Constant Thread, Roehm brings together the major events of her personal life, both happy and tragic; her successful foray into the fashion business; and what she has learned along the way. It is at once a very personal book but one that also illustrates her resiliency and her ability to move on to the next phase of her life. She is both forthcoming and philosophical.

“Because my books usually teach the reader something, my publisher wanted to know what I was teaching in this book,” says Roehm. “Basically I wanted to talk about the hard lessons of life and how to survive them and make something positive out of them.”

The book is uniquely designed to correlate Roehm’s fashion with her other design sensibilities: A table setting that inspires a dress, which, in turn, inspires a floral arrangement.

“This is a very different book for me and at times I was not sure it would come to fruition. The spreads are designed to illustrate my concept of the constant thread. In my creative process there is a direct relationship between all that I see and design. When I photographed the peony from my garden I did not think of the dress I had designed in 1990, but as I began to work on the book I instantly saw the relationship. In this visual memoir I try to illustrate my way of seeing and designing.”

Roehm is truly a Renaissance woman – successful fashion designer, author, photographer, painter (yes, she paints as well), keeper of extraordinary gardens, consummate hostess. She spends much of her time in Sharon at her country home. A few years ago she restored a grand old house in Charleston.

“I have an apartment in New York, but I wanted to do another house,” says Roehm. “I needed some kind of historical reference and Charleston filled the bill. I’m from Missouri, so I’ve had more southern influence than any other. I grew up on collard greens and grits and I have an affinity for that part of the country. Women care about entertaining at home and southern hospitality. The combination of Charleston’s physical beauty and the kindness of its people convinced me that this is where my next house would be. I try to spend a couple of months there, but I always have to be in Connecticut in the months when the gardens are in full bloom.”

Always looking for the next challenge, the next adventure, Roehm seems content with her life right now, and so she should.