The Honorable Judge Christi J. Acker of the The Dutchess County Supreme Court ruled in favor of the Town of Fishkill on Monday in a lawsuit filed by the Hudson View Park Company (Hudson View) against the Town in July of last year concerning the proposed Rolling Hills Development. Hudson View asserted a breach of contract claim concerning a Memorandum of Understanding signed by the prior Town Board that required the Town to review a proposed zoning amendment for the development. The zoning amendment would have changed the zoning classification of one of the parcels in the proposed development. Hudson View sought damages in excess of 1.2 million dollars from the Town.

In April, the 2020 Fishkill Town Board, led by newly elected Supervisor Azem “Ozzy” Albra declined to further consider the zoning amendment determining that consideration of a zoning amendment is discretionary. Hudson View filed its suit and the Town responded with a motion to dismiss the Complaint, asserting that the Memorandum of Agreement signed by the prior Town Board unlawfully bound future Town Boards on matters of legislative discretion. 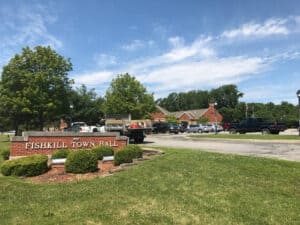 In a January 4, 2021 decision, Judge Acker agreed with the Town and dismissed Hudson View’s case determining that the Memorandum of Agreement was void, violated the Term Limits Rule (which prohibits a municipal board from binding a future board on legislative matters) and constituted illegal contract zoning.

“I am pleased that the Court has confirmed that the Town Board’s actions were entirely proper in this case,” Supervisor Alba said in a statement. “I have previously made it clear that the Town of Fishkill will not allow developers to dictate to the Town how it will operate.”

The Town’s Attorney Brian D. Nugent of the firm Feerick Nugent MacCartney echoed similar sentiments saying, “This decision is a complete victory for the Town of Fishkill and similarly situated municipalities. The Fishkill Town Board stood strong and refused have a developer-driven agreement forced upon the Town and its residents.”