The tavern has been a part of everyday life in America since the country’s very outset. 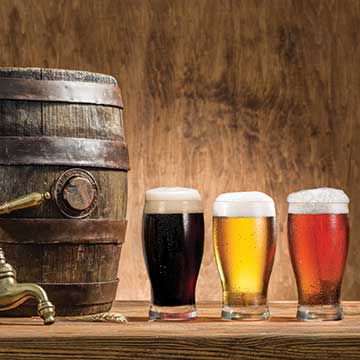 Ironically, those supposed teetotallers, the Puritans, are reported to have established the first tavern, then called an “ordinary” in 1634. It is believed that the White Horse Tavern in Newport, RI, may be the tavern located in the oldest building. Reportedly, the Blue Anchor in Philadelphia swung open its doors and welcomed thirsty customers in 1681. And some believe that the oldest continuously operating tavern is Jean Lafitte’s Black Smith Shoppe in New Orleans, LA.

The tavern is also linked closely with the birth of the United States. Boston patriots often met in taverns to discuss their plans of revolt against British rule in the 1760s and 1770s. (Does the name Samuel Adams ring a bell?)

According to historical references, City Tavern in Philadelphia served as an unofficial meeting place for the First Continental Congress, and Congress met at the Fraunces Tavern while City Hall was being constructed.

Taverns have served as meeting places throughout the nation’s history, where everything from a simple game of cards or billiards to beer, liquor, and food could be had. Often, horse races began and ended at taverns, as did militia-training exercises. Newspapers were read aloud, allowing rapt audiences at taverns to keep up with the goings on in faraway places, including their homelands in Europe.

Larger taverns provided rooms for overnight stays, and what would now be called upscale taverns had a lounge with a huge fireplace, a bar at one side, plenty of benches and chairs, and several dining tables. The best houses had a separate parlor for women. Incidentally, it is reported that during the Colonial period, roughly 40 percent of taverns/inn were owned by women.

Dutchess County naturally had its fair share of taverns, and the County’s Tourism board launched what has become a very poplar Historic Tavern Trail several years ago. Participants each month visit a notable tavern, or site of a former tavern, and enjoy a taste of local beers, other beverages, and hors d’oeuvres, along with a brief discussion of the history of the tavern/building.

During June, the Trail stopped in Millerton, where some three dozen attendees learned how the expansion of rail lines through Dutchess County connected New York City and gave birth to new towns. Millerton was one of them, a one-time booming railroad town filled with hotels, bars, and all manner of entertainment. Those in attendance were informed about the Prohibition Era in the area, “exploding stills, busted oyster bakes, and a variety of other colorful tales of liquor and crime in one of the county’s most scenic villages.”

“This is our second year of operation and we can see that the program’s reach is expanding,” explained Dr. William T.  Tatum III, Dutchess County Historian. “We kicked off the 2017 series at the Beekman Arms in Rhinebeck, NY, with a stronger showing than last year and our MeetUp group (www.meetup.com/dutchesstaverntrail) has more members than ever. We’re hearing a lot of buzz about the programs in the history community and, best of all, we’re seeing many new faces showing up to these gatherings.” The Trail will stop at two new locations in 2017, the Millerton Inn and Charlotte’s Restaurant in Millbrook on July 14.

The Tavern Trail seeks to highlight the links between iconic historic buildings, local cuisine, and county culture. The events seek to place each community in a spotlight that explores their distinctive characters and how people have chosen to live over the county’s three centuries of history.

Said Tatum, “We’re all about providing opportunities to learn more about the history that is imbedded in the local landscape and which we walk by on a daily basis.”

Tatum told of the genesis of the Dutchess County Tavern Trail. “My counterpart across the Hudson, Orange County Historian Johanna Yaun, started a tavern trail series back in 2015. County Executive Molinaro and County Clerk Kendall loved the idea, so I received permission to launch a similar program here. We started last year with eight host sites, ranging from the Round House restaurant in Beacon to Dutch’s Spirits in Pine Plains. The hosts and the attendees love it, so we’ve kept on planning more events.”

The Dutchess County Historic Tavern Trail is a “friend-raiser” event for the county history community. Each event features a brief (20 to 30 minute), casual presentation of interesting history stories from the local area, followed by dinner and drink specials at the host location.

“My office partners with the local historical societies to insure that we offer accurate and entertaining insights,” said Tatum. “In contrast to the lectures and other events on offer, the Tavern Trail seeks to reach people who might have a passing interest in history and are up for a fun, informal event that mixes history, cool locations, and outstanding local cuisine.”

So far, the public has responded favorably. “Attendance varies depending on the location and the time of year, but has always been enough to keep us moving forward,” said Tatum. “Attendees often leave testimonials on the MeetUp page, always praising their experience.” Past programs have been lauded as “Lots of fun, informative,” “Great way to spend a mellow Friday night. History fans will love it,” “Very enjoyable. Thanks to all who worked so hard to make it possible,” and “Lived in Dutchess my whole life and never knew of Dutch’s Spirits. Fantastic Job!”

Said Tatum, “We will continue to pursue the seven-site model, where we visit a different location on the second Friday of each month from May to October. To keep things fresh, we’ll have a different theme every year and also rotate host locations. Our theme in 2016 was historic taverns, this year we’re exploring Temperance and Prohibition. So, every event features a different set of stories, either about the gangster era of underground distilleries and sheriffs raids, or the decades of calls for outlawing liquor that stretch back into the eighteenth century.”

In 2018, the Tavern Trail will be focusing on World War I, highlighting the local connections to the fighting in France. “We are already scouting new locations, with hopes of adding communities, including Amenia to the tour.”

“We’ve had a strong positive response from our hosts, whether they be historic sites (like the Elmendorph Inn in Red Hook) or restaurateurs. They all seem to appreciate the historical nature of their locations and the work we put into bringing new audiences to them. The program has been a great way for building closer links between history and the business community, which is a natural pairing in a county as old as Dutchess.” •

To learn more about the Dutchess County Historic Tavern Trail, visit them online at www.DutchessTourism.com.