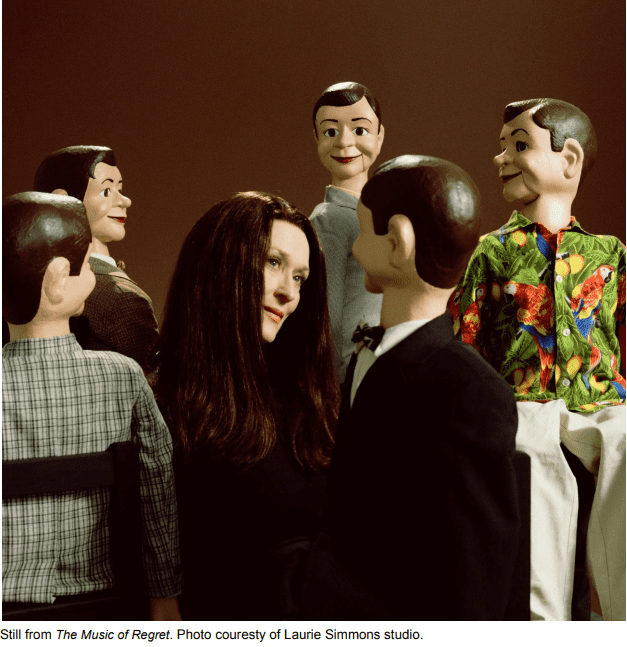 A Screening of The Music of Regret starring Meryl Streep and The Alvin Ailey Dancers, followed by a conversation with artist and filmmaker Laurie Simmons and writer, director, actor Lena Dunham.

The Cornwall Library in Cornwall, CT announces the launch of its 2021 programming with a benefit event featuring Cornwall resident Laurie Simmons in conversation with her daughter, Lena Dunham. The event will be a live Zoom webinar, beginning with a screening of Laurie’s film, The Music of Regret. A deeply personal film, Simmons employs dolls, custom made ventriloquists’ dummies, and animated objects to act, dance, and sing about love, interpersonal dynamics, problems with neighbors, and of course, regret. The film has only been released intermittently since its premiere at the Museum of Modern Art (MoMA) in 2006. Known primarily as a visual artist prior to making this film, Simmons also wrote all the lyrics, which were set to music by Michael Rohatyn. They range in style from American Songbook to Hawaiian ukulele serenades and are sung by Meryl Streep and Adam Guettel. The dancing objects scenes were performed by The Alvin Ailey II dancers.

Laurie Simmons is an artist known worldwide for both her photography and her films. For almost five decades Simmons has photographed scenes she creates in her studio with dolls, ventriloquist dummies, mannequins, and the occasional human. Through these scenes, she explores deep psychological issues between individuals, families, and memory. Her work is dreamlike and non-linear, suggesting a world inhabited by emotions with agency. Considered part of The Pictures Generation, her images can be seen as a critical response to magazine and advertising images portraying “the perfect American life” in post-WWII America. A retrospective of her work entitled Big Camera / Little Camera was exhibited at The Modern Art Museum of Fort Worth and The Museum of Contemporary Art Chicago in 2019. Her work has also been shown at MoMA, The Metropolitan Museum of Art, The Walker Art Center in Minneapolis, The Jewish Museum in NYC, and the Contemporary Art Museum St. Louis, as well as in many galleries and group shows.

Lena Dunham is Laurie’s daughter with her husband, painter Carroll Dunham. Inspired by her mother’s career, she began writing shorts and feature films while at Oberlin College. In 2009, Dunham’s cult following sprang up due to her web series Delusional Downtown Divas and Creative Nonfiction, her first feature film. She then wrote, directed, and starred (with her mother and sibling Cyrus Grace Dunham) in Tiny Furniture (2010). In 2012, Dunham became a household name with her HBO series Girls.

There will be the opportunity for audience members to write in questions for the artists during the event. The fee is $20 per household/computer. To register for the event, please go to the events/programs page on the Cornwall Library website at: CornwallLibrary.org.