On December 21 at 2 pm, Free, Noble Horizons invites you to enjoy a concert with the talented Wanda Houston and her trio. Ms. Houston, known for dazzling renditions of musical theater, jazz, gospel, R$B, will also perform holiday favorites.  Following her concert, guests are invited to enjoy a reception with Ms. Houston and her band.

Ms. Houston has performed professionally throughout the U.S., Europe, and Australia. She has appeared on Broadway stages, in films, recordings, and television.  She has worked in varying capacities with Michael Jackson, Barbara Streisand, John Tuturro, Eddie Izzard, Natalie Cole, Eartha Kitt, and Patti LaBelle on the stages of Universal Studios, Radio City Music Hall, Madison Square Garden, and Carnegie Hall.  Living now on the East Coast in New York and New England, she has returned her to the roots of her career and music and collaborates with musicians in venues that include The Bushnell, Goodspeed, The Mahaiwie and Infinity Hall.  Ms. Houston is passionate about sharing her music and its powerful effect on hearts and minds.  Registration for Ms. Houston’s free program is at www.noblehorizons.org or 860-435-9851. 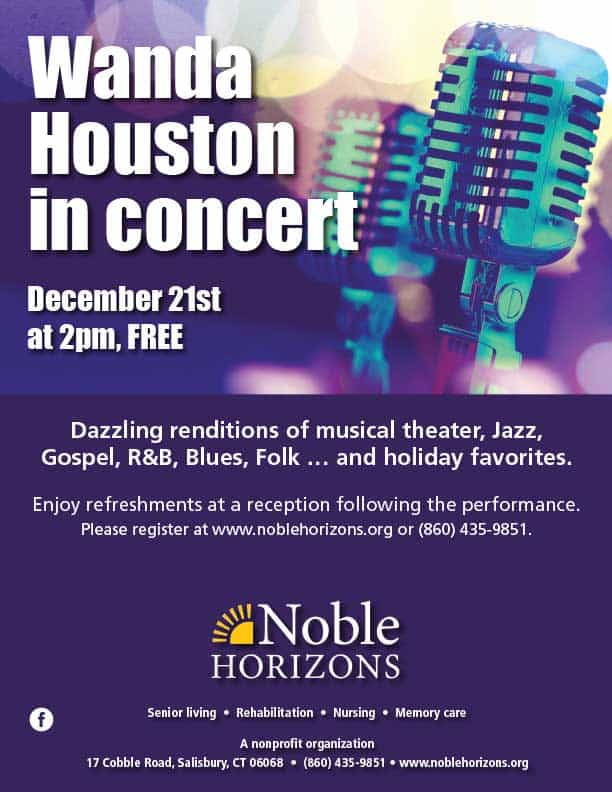