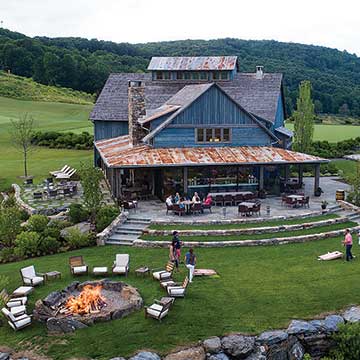 Two hours from New York’s Grand Central Station, the hamlet of Wassaic in the Town of Amenia is the end of the line on the Harlem Valley Metro North railroad. On the other side of the tracks, on Route 22, is the exclusive Silo Ridge Field Club. Fifteen years in the making, Silo Ridge, our area’s first luxury gated community, the Tuxedo Park of the 21st century, is becoming a reality. Will it alter the character of northeastern Dutchess County? Will it affect real estate prices in Amenia and the surrounding area?

Amenia has changed a great deal in the last several years. The town government is now comfortably settled into the old Amenia elementary school, which it purchased for $1 from the school district. The Presbyterian Church (see photo right) with its colorful slate roof and Tiffany window was sold for $250,000 to Stoneleaf Lot Venture LLC and will be converted into off-site office space for Silo Ridge. The former gathering spot, the Cozy Corner, has been transformed into Monte’s, a casual fine dining destination with celebrity chef Daphna Miszrahi. Amenia is returning to its past as a resort with the high-end revival and renewal of Troutbeck, sold to new owners in 2016 for $5,903,000. The reputation of the art, dance, music and film programs in the converted Maxon Mills grain elevator and livestock auction barn of the Wassaic Project continues to grow, attracting the contemporary culture set.

With the 2013 closing of the Taconic DDSO, a state institution for the developmentally disabled, located in Wassaic and the consequent loss of jobs has had an impact on the local housing market. The future of the former 330-acre campus, adjacent to the Ten Mile River Metro North stop with 50 buildings and an on-site power plant, remains uncertain.

According to the sales team, there are 245 “front doors,” the term they use instead of units, and 70 have already been sold – most for all cash. A buyer can choose from 57 estate lots and build their own house – 25 have been sold according to the sales team (see chart). Another option is a stand-alone 3,100 to 4,800 square foot developer-built house which can be individually customized. Most of these sales are package deals costing between four and five million. Condo townhouses are going up with 17 of the 88 already closed at prices averaging around $2.5 million and the first buildings getting close to move-in.

You won’t find Silo Ridge “doors” for sale on Zillow. All of the sales are handled by Silo Ridge’s own sales force and many are sold to New Yorkers who already have a home in one of Discovery Land’s other developments.

The buyers are not retired guys in white shoes riding around in golf carts. Although four of the world’s top ten ranked golfers recently played a charity tournament with club members, golf is not the only attraction according to Piper Broderick, a member of the marketing team. “Silo Ridge is about casual luxury and stylish opulence. The activities appeal to young families – hiking, the kid’s camp, swimming, biking, basketball, tennis, and the organic garden. Community life will be centered around a planned 30,000 square foot Lodge Clubhouse with a spa, fitness center, and lap pool. Not to mention the humoursly named “Comfort Stations” dotting the compound with hot dogs turning on the grill, smoked duck breast, coffee, and a selection of candy. The compound’s multitude of activities solves the familiar problem of country houses – nothing to do and nobody to do it with for children of members.

Outside the stone gates local property prices are stagnant

The Amenia market has always been one of extremes, with houses selling for less than $250,000 to the local residents, and high priced homes with acreage for the weekend crowd (see chart). Last year 18 of the record number of 26 residential sales were below $250,000. At almost $11 million, the number of residential sales transactions and sales volumes on a comparable basis is the highest on record since 2008, but the median price of all homes is stalled at $227,000. One home owner in the Depot Hill family neighborhood, just took her house off the market for the winter. She lamented that only three potential buyers had visited the handsome 2,300 square foot home listed at $230,000 all summer.
Larry Havens of Haven Real Estate, who has an office in Amenia, observed that houses are selling, but that sellers aren’t making much money. Last year only one home sold for over a million dollars. Located on Deep Hollow Road it closed at $1,575,000 with 365 acres of land after eight years on the market. Only four of the 26 residential sales in Amenia last year were over $500,000.

The sale of raw land, excluding Silo Ridge, was the lowest in the last eight years with only six sales. In 2015 and 2016 most raw land sales were small residential building lots with the average price per acre dropping to $6,000 and below, in part because of some large sales of unproductive land. More typical is the $12,000 to $16,000 average between 2008 and 2014.

No price change yet

Total value of raw land on the market with asking prices totaling nearly $20 million is almost five times higher than actual sales in 2011, which was the highest on record and dwarfing raw land sales last year of only $613,200.

What the impact of Silo Ridge will be on the Amenia market is still uncertain. The development will create as many as 200 local and part-time jobs, increase the town and school property tax revenues, and change the public profile of Amenia. Will it increase demand for modest homes? Will it compete with the purchase of high priced estate properties or will it make them seem like a bargain?