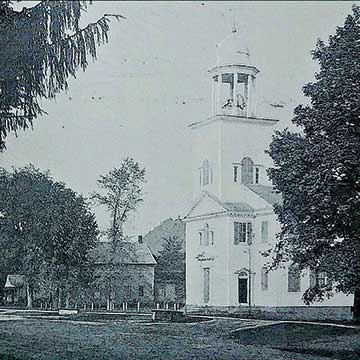 He was born into a time when religions and culture were shifting rapidly, often colliding. Multiple denominations were vying for followers, but church membership was in decline. Rationalism and skepticism was on the rise.

His name was Jonathan Lee, and as he grew up in Coventry, CT, the “Great Awakening” rose around him.
New England churches had lost the fire that once animated them; in those days many practiced a “staid and routine formalism.” People who sought a heart-felt, emotionally-rich experience increasingly looked away from traditional faith.

But in the year Jonathan Lee turned 15, Jonathan Edwards preached an electrifying series of sermons to the north: part of a revival drawing thousands.

In those years, Lee was educated at Yale. Soon after graduating he traveled to a small settlement, recently named Salisbury, to lead worship. The twenty-five year old must have made an impression: hired to preach for a year, only three months later the settlers asked him to stay. After seven months of deliberation – and determination that the town’s promises of land and housing were serious – Lee accepted their offer.

Two weeks later he married Elizabeth Metcalf. Soon after, Mr. and Mrs. Lee made their way on a borrowed horse through the Connecticut wilderness to their new home.

Taking matters into their own hands

Three months later the townspeople of Salisbury (at least the male landowners), rather than following the custom of requesting that the New Haven County Consociation ordain its minister, decided to form their own, irregular, ordaining council.

On October 24 they voted that “Mr. Jonathan Lee and Mr. Thos. Chipman appoint ye time Mr. Lee be ordained & ye men to Do ye Work.” They fixed the date for gathering the church and the ordination on November 23. Salisbury had a church and a minister: fiercely independent, with a conservative focus on eternal salvation and a liberal sympathy for the spirit of the Great Awakening.

On November 23, 2019, the Congregational Church of Salisbury, UCC, will remember the Rev. Mr. Lee, his fourteen successors, and hundreds of lay leaders on its two hundred and seventy-fifth birthday.

The church of today would scarcely be recognizable to its founders. Where its first congregants fixed their attention on learning doctrine (often expounded in hour-long sermons), recent generations have absorbed the story of the Easter faith: “the victory of seemingly powerless love over loveless power.”

Where church members once saw Christian mission as a call to convert others to the faith, mission has gradually transformed into deep relationships of solidarity with communities who struggle for dignity, housing, food, and healing.

Yet over the decades, the congregation has kept alive those twin foci: on the one hand, appreciation and reverence for Christian traditions; on the other, a passionate desire for the lived experience in the world of God’s shalom: wholeness, harmony, justice, and joy. The creative tension continues to give energy to the church.

Mention the Congregational Church of Salisbury, and most will think of the stately building dedicated on June 12, 1800. Designed with the careful simplicity typical of many Federal-style Meeting Houses, the interior is largely plain. It has changed over the years. In 1960 the Parish Hall was dedicated, adding meeting and classroom space to the east of the Meeting House (where previously there had been a residence, and long before that space for parking buggies and tying up horses).

The organ that once dominated the front end of the room was, in the 20th century, moved to the rear. Built with columns to support balcony and ceiling, those were deemed irrelevant and unsightly, and taken away. Eventually the weight of the ceiling started to push the walls out, and the columns came back.

Through every change, the large windows gave a view of the beauty of the natural world, serving as a kind of virtual “stained glass,” showing colors of the creation’s beauty changing with the seasons.

All along, both Meeting House and Parish Hall have served the community along with the congregation as places for hospitality, assembly, education, and recreation.

The creative tension between conserving tradition and openness to transformation continues. The Meeting House looks much as it has for 219 years but in the entryway, at this writing, a new, ADA compliant bathroom is nearing completion. An observer could see that as changing with the times; church members are more inclined to say, “This is what faithful hospitality looks like.”

Our pattern of worship is rooted in a 500-year old tradition, while preaching has moved from the fiery Calvinism of the 18th century to the liberation theology and intersectionality of the 21st. The congregation’s Open and Affirming statement makes plain: everyone is welcome, just as you are.

As Pastor Emeritus the Rev. Richard Taber once said, “I believe we need … to live as though there will be a tomorrow, and hopefully many more tomorrows, but at the same time to live as though tomorrow or even today may be the last. Carpe diem – seize the time.”

At 275 years the Congregational Church of Salisbury, UCC, is still practicing seizing the time. Stop by to visit, and make our joy complete!

By The Rev. Dr. John A. Nelson
jnelson@salisburyucc.org

John A. Nelson serves the Congregational Church of Salisbury, UCC, as its Designated-Term Pastor. A graduate of Union Theological Seminary in New York City (M.Div.) and Chicago Theological Seminary (D.Min.), he was ordained at Judson Memorial Church in 1997 and has served congregations in Gloversville, NY, Dover, MA, Niantic, CT, and Lenox, MA. He is a co-convener of Berkshires Advocacy and Support for the Immigrant Community (BASIC). Before beginning pastoral ministry he worked in Guatemala with Witness for Peace.