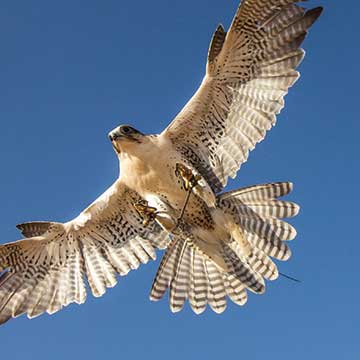 Once upon a time, we humans had to hunt for our food, and not in the aisles of markets, but in the great outdoors. Having neither sharp claws, large teeth, great speed, nor wings, we had to rely on our smarts, and that meant finding help.

The swift and sure falcon became part of our arsenal dating back at least 4000 years. Our ancestors recognized that these magnificent birds of prey could strike game in the air and on land, and didn’t make a mess of it during the kill.

Falcons were once prolific in many parts of the world, stretching from Europe into the Middle East and Asia. As a bird of prey, the peregrine falcon is a raptor, and one of many that fall under the hawk family, which includes longwings, shortwings, and broadwings. The peregrine falcon is a longwing, as are sakers and gyr falcons. These are most commonly used for hunting. Shortwing hawks include goshawks and sparrowhawks; broadwings include eagles and buzzards.

Peregrine falcons are the fastest of the raptors, with cruising speeds of up to 55 miles per hour, and when stooping (coming in on the prey), can reach speeds of over 200 miles per hour. As we know from our driver’s education instruction, the impact of something coming at you at that speed is deadly.

Peregrine falcons have curved beaks to tear into flesh, relatively large eyes that can take in great distances, and very large, sharp talons that close when the falcon is about to strike so that the prey is pierced straight through, dealing an instant death blow, after which the talons are extended to grab and carry the prey. The peregrine’s natural diet is mostly other birds, but they are many and varied, including those most desired by their trainers – pheasants, pigeons, and ducks.

Peregrine falcons are classified as carnivores. They weigh from two to five pounds, and have a wingspan of three to three-and-a-half feet. Females are larger than males and are the true “falcons;” males are called “tiercel.” Peregrine pairs mate for life, but only come together to reproduce, as they are solitary hunters. Formidable and intense, peregrine falcons are surprisingly docile, which is how they came to be trained millennia ago.

In North America and right here on the Hudson

In the United States, the peregrine falcon population has rebounded from near extinction in the mid-20th century to their numbers being considered strong and growing throughout North America. It turns out most bridges spanning the Hudson River from Manhattan to Albany have nesting boxes on them, according to the Department of Environmental Conservation (DEC). A pair nests on the Dunn Bridge between Albany and Rensselaer counties, in fact, and there’s another pair on the Mid-Hudson Bridge between Highlands and Poughkeepsie. There are cameras on the bridges, and between March and July you can log in to see live footage of them in action (go to www.dec.ny.gov for more).

Most states have associations or groups dedicated to falconry, including New York, Connecticut, and Massachusetts. The North American Falconer’s Association estimates there are about 5,000 licensed falconers in the US. Members of these organizations are true devotees of the birds themselves and the sport of falconry. Some of them hold events where you can spend supervised time with a hunting bird, and some of them participate in agricultural shows to educate people about their birds of prey.

The New York State Falconry Association discusses the sport with reverence. “Hunting with a wild bird of prey is an exhilarating and fulfilling endeavor,” the website explains, continuing, “There is nothing quite like watching your hawk pursue and ultimately take its quarry. Or marveling as it flies toward you through the trees and lands deftly on your waiting glove. The bond between falconer and bird is a lifelong, deeply treasured relationship … becoming a falconer must be done with great forethought and readiness.”
Lest someone not take this advice seriously enough, the site states clearly, “It requires seriousness and maturity. It requires considerable time and resources. It is not to be taken lightly. It is not a hobby. It is a lifestyle.”

A great opportunity to work one-on-one with a bird of prey is offered by New England Falconry, based in Hadley, MA, New England Falconry has a partnership with the Woodstock Inn & Resort in Woodstock, VT, where Master Falconer Chris Davis brings his harris hawks for newbies to experience the handling and flying of the trained birds. And you don’t have to stay at the Inn to sign up for the experience. (Learn more at falconryatwoodstockvt.com).

We are fortunate to be able to share where we live with a variety of impressive birds of prey – even eagles and turkey buzzards. I saw a pair of bald eagles over a field in Chatham, NY, the other day. There are also kestrels, red-tailed hawks, merlins, osprey, northern goshawks, northern harriers, and more. The DEC has a beautiful identification sheet on the Raptors of New York on its website at www.dec.ny.gov.

Falconry has historically been a sport most participated in by men, but women have long been involved. Many notable women, in fact, from countries around the world. Seven schools of falconry were developed based on the practices of Kochicu in Japan around 358. She was the daughter of the Emperor. In Sardinia in the mid to late 1300s, Eleanor of Arborea was an experienced falconer who was also a judge and was the first to pass laws to protect certain birds. Mary Queen of Scots was a falconer, as was Mary of Canterbury, who was the Grand Master of Falconry for Queen Elizabeth I. In Russia in the 1700s, Catherine the Great was a passionate falconer and devotee of birds of prey, preferring the Merlin to all others.

Hooray for the internet’s ability to bring groups of people together. The International Association of Falconry (www.iaf.org) has a Women’s Working Group that promotes women in falconry. At thegreatbigstory.com you can see a video of American Lauren McGough talking about how she learned falconry in Mongolia and continues it to this day. If you take up the sport, let us know about it!