There is some emotional relief in “1917,” the latest, exceptional film by director Sam Mendes.  The emotional relief lasts for about 3 minutes before the audience realizes that they are on a day, night and morning furtive journey … a foot race to halt a brutal ambush of British troops in World War I.

Once the transition has been made, the intricate ballet of two young soldiers (George MacKay as Lance Corporal Will Schofield and Dean-Charles Chapman as Lance Corporal Tom Blake) threading their way through the British trenches, out into the “no man’s land” separating the British lines from the German lines, through death, tragedy and constant tension draws the attention of the audience like a jet powered vacuum.  There is no averting one’s eyes from the screen.  There is no time to re-fill the soda or step out to check for text messages.  This is two hours of complete dedication … and worth every minute of that investment. 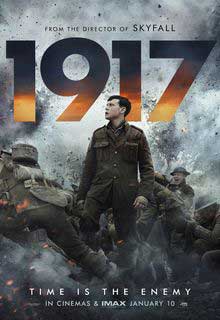 Mendes is one of the most brilliant directors at work in the industry, having garnered an Academy Award (OSCAR) for his debut film, “American Beauty,” and progressing through two of the James Bond epics to arrive at “1917.”  Reunited with Cinematographer Roger Deakins, the production is complex and completely convincing – from the seemingly endless British and German trenches to the burned out French town to a harrowing trip down a rushing river and towering waterfall.  The visuals are so compelling that it’s difficult to imagine the complexity of “1917” production.  The budget for the film has been announced at $90 Million.  If true, then every penny is on the screen.

This is a war story.  It is gritty, stark, dramatic and both tragic and triumphant.  Over 500 “extras’ appear in the film, which makes the scramble through the trenches claustrophobically real.

“1917” garnered the Golden Globe award for Best Picture of 2019 and Mendes was recognized as Best Director.  Although it is foolhardy to predict the whim and will of the Motion Picture Academy (AMPAS), considering “1917” the front runner for the OSCAR seems like a fairly safe emotional bet.  There have been several brilliant films … some not so brilliant, but highly touted … but “1917” is truly outstanding in every detail.

The subject of death is very much a part of the film, and the intensity of the story line makes “1917” deserving of its “R” rating.  That being said, it is not a film to be missed.  See it on the big screen. The brilliance of Deakins’ camera work and the discipline Mendes has brought to the story telling is remarkable.  Based on stories he heard from his grandfather, a veteran of World War I, Mendes co-wrote the script and has delivered a film that is a tribute, a challenge, a remarkable story of bravery and loyalty and an unblinking view of the human side of war.

In wide release, “1917” can be seen at The Moviehouse in Millerton, NY, Triplex Cinemas in Great Barrington, MA and Bank Street Theatre in New Milford, CT.