FILM REVIEW – A BEAUTIFUL DAY IN THE NEIGHBORHOOD

It’s true.  “A Beautiful Day in the Neighborhood” is a beautifully crafted film about television icon Fred Rogers, played with magnetic charm by one of our greatest living film actors, Tom Hanks.

It’s true.  The film centers on the relationship between Mr. Rogers and Lloyd Vogel (mirroring the experience of journalist Tom Junod). Matthew Rhys portrays Vogel in a tortured, conflicted way that brings serious dramatic tension to the film.

It’s true.  Mariette Heller’s direction is beautifully paced, balancing the imaginary world that was found on the “Mr. Roger’s Neighborhood” television set at WQED in Pittsburgh, PA with the real world of a New York loft apartment, suburban houses, subway cars, hospital hallways and a cemetery.

The result is a deeply moving film that may not attract every audience as OSCAR season begins to gain momentum, but is a film that will evoke a positive emotional connection for those who become immersed in Hanks’ mesmerizing performance, identify with Rhys’ struggles and become caught up in the deeply honest relationship he has with his screen wife, played with gentle strength by Susan Kelechi Watson. 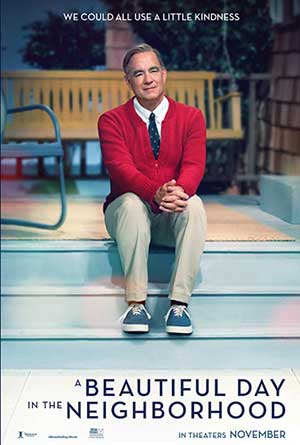 If you are a parent who watched your children grow up with the sincerity, honesty and humility of Fred Rogers, you will be charmed by the incarnation of his character by Hanks. If you are an adult with childhood memories of spending time with Lady Aberlin, Mr. McFeely, King Friday XIII and Daniel Striped Tiger across 912 episodes, the film will take you back … evoke memories of safe, honest, empowering programs originally aimed at audiences from 2 – 5 years old, but finding an audience in a much wider range.

There are several scenes within the film that evoke laughter, may generate an honest tear, or simply invite the audience to become part of the action.  When Mr. Rogers and Lloyd Vogel ride the New York subway and the occupants of the rattling car recognize the PBS superstar, the spontaneous rendering of the show’s theme – “Won’t You Be My Neighbor?” – first by a young child and, eventually, by all of the fellow travelers in unison is a moment designed to allow joy and admiration to bubble up inside of everyone.

Lloyd Vogel becomes a changed man.  His father (played beautifully by seasoned character actor Chris Cooper) finds deathbed resolution to a life not well lived and the audience is reminded that Fred Rogers taught generations what it means to truly “be my neighbor.”

“A Beautiful Day in the Neighborhood” is rated PG and is playing in wide release, including Bank Street Theater in New Milford, CT, Spotlight Cinema in Hudson, NY and Triplex Cinema in Great Barrington, MA.