This film may be a welcome relief from the “adult” fare that is populating theaters as the ramp up to “OSCAR Season” continues.  If the intended audience is a bit too young for “Joker” and unenthused by the prospect of 2 hours of “Downton Abbey,” then “Abominable” may just be the outing you’re looking for.

At 97 minutes, it’s not too long for the family to enjoy, and with the dazzling animation of Pearl Studios (China) at Dreamworks Animation (US) it’s a visual treat from beginning to end.

The story has overtones of other childhood adventures.  A young girl (Yi, voiced by Chloe Bennet)  lives with mother and grandmother in a Shanghai apartment block. She mourns her father, and clings to his memory by playing his violin when she retreats to the rooftop.  It’s there, one evening, that she encounters … well, in her words “There’s a yeti on my roof.” The mythological animal, otherwise known as an “abominable snowman,” is trying to escape the clutches of unique species collector Mr. Burnish (voiced with great gusto by Eddie Izzard). Leading the capturing party is Dr. Zara (the voice of Sarah Paulson) who, it turns out, has other plans for the amazing, magical yeti, if she and the troupe of goons she has assembled can actually capture the beast. 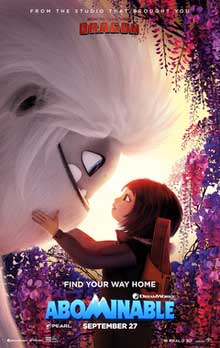 The through line of the story is that Yi and her two friends, Peng (Albert Tsai) and Jin are determined to return the yeti they name “Everest” to his home in the Himalayas … quite a journey from Shanghai.   Through forests, along rivers, through roiling fields of flowers to the craggy mountains, the three children and the yeti make their fitful way, pursued at every turn but the technologically empowered Dr. Zara, Mr. Burnish and the band of thugs.

As you might imagine, just when things seem to be at their worst, there is a “deus ex machina” escape and most, if not all, live happily ever after.  The presence of Fleetwood Mac’s “Go Your Own Way” on the soundtrack should give even the casual viewer a hint of the affirmation of the story.

Pleasantly told, beautifully animated and well paced, “Abominable” is far from it.  It’s good fun and worth the trek to the cinema with the family.  Although some multiplex theaters do not have enough screens to accommodate “Abominable” in he rush of new films, it’s worth seeking out a theater near enough for a casual drive just to see what a $75 Million budget can bring to the screen in this day of superb computer design and animation.

There was a reason we did not mention who voices the character of young Jin, friend of Yi and self-proclaimed caretaker of young Peng.  Jin is voiced by Tenzing Norway Trainor, a young Disney-trained actor whose grandfather was none other than the Tenzing Norgay who was first to summit Everest in 1953 with Sir Edmund Hillary.  The connection should not be lost.  Everest is the goal … as it was generations before.

“Abominable” is in wide release, rated PG for action and some “rude humor.”