“Ad Astra,” currently in wide release, is as much about the vastness of inner space as it is about the vastness of outer space.  Brad Pitt, who stars as Roy McBride, astronaut son of a legendary astronaut father (Tommy Lee Jones) is chosen for, rejected, then commandeers his way back into a mission to seek … and destroy … his father and his misbegotten mission to search for intelligent life in the universe.

James Gray, who directed the $100 Million space fantasy, shares writing and producing credits, as well. Underlying the mastery of this fully engaging and deeply layered film may be autobiographical emotions … but if that is the case, it is not a singular expression.  Men may have more difficulty living with, or down, the influences of their fathers, but surely women feel the same conflicts and struggles in their own relationships.

This film is about two men, however, and the complexity and vastness of the journey that brings them face to face is a cinematic experience not to be missed.  The imagined future has commercial flights to the moon (the blanket pack is $125, please) and a shopping mall offering Subway sandwiches and DHL shipping services.

The transfer from the commercial base to the “dark side of the moon” where the military flights emanate has pirates and the risk of violent death.  Shot in the Mojave Desert and combining infrared photography with standard film techniques, the sense of being on the lifeless moon is mesmerizing, and prophetic.

Pitt’s performance, from the nuance of a tear gently finding its way down his cheek to the believability of his own struggles with maintaining coherent consciousness to the understated drama of confronting a father presumed dead 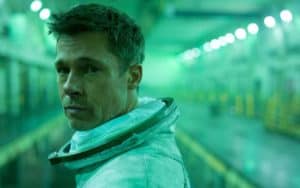 Brad Pitt stars in the latest from director James Gray

… a hero who has become, through his own brilliance, a monster … is masterful.  It may be too early to handicap the OSCAR races, but don’t be shocked to see Pitt’s name on the nominee list.

Supporting roles are so carefully treated that stalwarts like Donald Sutherland and Tommy Lee Jones provide performances that crackle with their immense talent.  Liv Tyler as Roy McBride’s estranged wife utters no more than a sentence of dialog, but is indelible in her impact on him.

“Ad Astra” (Latin for “to the stars,” part of the motto of the State of Kansas – ‘ad astra per aspera’ meaning ‘to the stars through hardship’) is a very apt title for the tumultuous journey one individual experiences to truly find himself.  The expanse of special effects photography, the detailed technology and the presumption of what life will be in the near future is merely the background for the inner journey Pitt’s character experiences … and shares with all of us.

There’s an interesting twist in the final scene of “Ad Astra.”  No spoiler alert needed.  When you see the film, however, imagine, if you will, Edward Hopper’s landmark painting “Nighthawks” with its overtones of loneliness and isolation.  James Gray has created a masterful film, drawn on images and influences across the American experience, and delivered 2 hours and 2 minutes of an hypnotic journey to outer space/inner space … and back.

“Ad Astra” at The Moviehouse, Millerton, NY and in wide release.  The film is rated PG-13 for some violence and language.