“Bombshell” doesn’t begin with an obliterating explosion.  It simmers and bothers … it teases and terrifies.  Then, with targeted force, it explodes.

This is the story of the total collapse of Roger Ailes, the legendary creator of the Fox News juggernaut who took his experiences promoting the elections of Ronald Reagan, the Bushes, Rudy Giuliani and other lesser names and created a network that has emerged as the beacon of the political right.  His humiliating attitudes toward the women who worked for him, his crass behavior, his sexual advances unfold like the wilting petals of a dying rose.  He is portrayed as a monster with an army of women ultimately discovering their voice and their resolve, heralding his downfall like the chorus of a Greek tragedy.

It is the performances of the stars that has generated high praise —  Charlize Theron as Megan Kelly dominates the story, uncovering, struggling, probing and eventually speaking forcefully about the indignities perpetrated by Ailes. 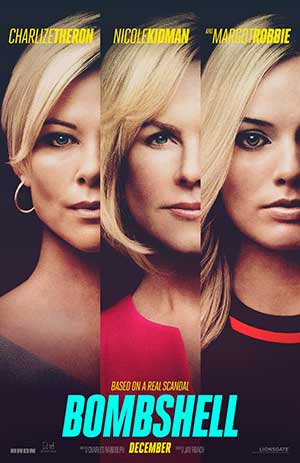 Nicole Kidman is Gretchen Carlson, whose firing by Ailes was the catalyst that brought the entire issue from shrouded in denial to smoldering to exploding.  Margot Robbie, who with Theron has been nominated for a Golden Globe Award, begins as the naïve ingénue who gets caught up in the maelstrom that is life at a national network and ends with making her most profound statement by walking away from the suffocating empire that is Fox News.

All three of the female protagonists have been nominated for Screen Actors Guild Awards, Charlize Theron for Female Actor in a Leading Role and both Kidman and Robbie for Outstanding Performance by a Female Actor in a Supporting Role.

For as much as a scoundrel his character is cast, John Lithgow as Ailes is magnetic.  He embodies (no small effort) the character and, in his cascading decline, brings his world crashing down with denials, screaming fits, accusations and a pettiness that is crippling.  Why his performance has escaped nomination is a bit of a mystery.  For those who have marveled at Lithgow’s multi-faceted career, this performance is a landmark.

The screenplay, written by Academy Award winner, Charles Randolph, continues his style of the crisp storytelling motif that moves quickly between relevant scenes with the various actors who drive the narrative forward.  As he did in “The Big Short” the film moves forward with a dispatch that keeps every scene … even those most uncomfortable … spare and engaging.

“Bombshell” is rated “R” for language and is in wide release including The Moviehouse in Millerton, NY and The Triplex Cinema in Great Barrington, MA.