And, now we have “Cats,” the film.  How, in the name of all that is magical about movies, did we get to this forsaken place?

Well, once upon a time, there was a brilliant set of poems by British poet T. S. Eliot.  When wildly celebrated composer Andrew Lloyd Weber gathered up a copy of “Old Possum’s Book of Practical Cats” and turned it into a musical, it became an international smash.  From London’s West End to Broadway to the world there were lines outside of theaters as adoring fans crowded in to marvel at the magic.  The characters were magnetic.  The music was superb.

A cast riddled with brilliant performers – Judi Dench, Idris Elba, James Corden, Jennifer Hudson, Ian McKellen and yes, Taylor Swift – is thrown onto a complex soundstage that some have likened to a date4d video game and forced to plod through Weber’s songs as the very thin story unfolds.

If there are bright spots in the wasteland, one might be Ian McKellen’s performance as Gus the Theatre Cat and the other is the choreography around Steven McRae’s sketch as Skimbleshanks, the Railway Cat. 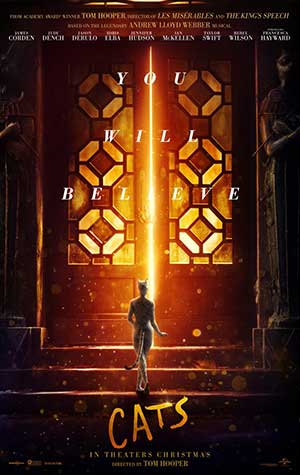 The choreography may be brilliant, but it’s hard to see with the choppy editing.  The music may be wonderful, but each segment becomes so painful that the musical track is transcended by the overwhelming desire to return to the concession stand for something a great deal stronger than a soda.  The actors may bring a string of awards and rave reviews for their previous work, but if we could offer some unsolicited advice, it might be best to leave a few cuts from “Cats” off their promotional reels.

The newcomer, ballerina Francesca Hayward, may move with elegance, but she appears to have but one facial expression that continues to attract the camera for lovingly long takes that truly go nowhere.

“Cats” has been heralded as one of the worst films of the year … even the decade.  It may appeal to a very specific audience of folks who want to see what one of their favorite theater moments looks like when splashed on the big screen, but for the rest of the pre-Oscar frenzy of seeing everything that comes out, this could well be moved to the bottom of the list and be sampled only if the sock drawer is already sorted and the basement is neat and tidy.

“Cats” is rated PG and in wide release including The Moviehouse in Millerton, NY..