There are clearly two audiences for what the producers’ publicists have dubbed “The Downton Abbey Motion Picture Event.” And, an event it is.

The first audience is most predictable. For those who immersed themselves in the intrigues, fortunes and failures of the aristocratic Crawley family through five seasons of “Downton Abbey” on PBS, it is a homecoming of sorts. You (and you know who you are) know the histories, foibles and fantasies of the primary cast, most of whom have returned for the film. You laugh when they speak, you cheer when they live out their characters to precise British perfection.

Your love is not misplaced. The film is set in 1927, two years after the concluding segment of the television show. The King and Queen are coming for dinner, and the staff of Downton Abbey sets the process of dusting, polishing, vacuuming and acquiring menu items in frenzied motion. Somehow Lord Grantham (Hugh Bonneville) and his immediate family seem less perturbed, as they should be. They’ve called Carson (Jim Carter) out of retirement to orchestrate the “below stairs” crew so they can worry about formal gowns, a predictable dust-up orchestrated by the indomitable Maggie Smith in her role as Violet Crawley, the Dowager Dutchess of Grantham … and setting up folding chairs in a pouring British rain. Let’s not forget the folding chairs. Most of the original cast is back, and the legends and lore of “Downton Abbey” continue, unabated.

The second, and most distinct audience, is comprised of those who did not religiously situate themselves in front of their television, abandoning family, friends and football to be transported to the fairy-tale world of the English aristocracy in the early 20th Century.

For this opposing team, there are moments of light humor, minor intrigue, predictable tensions and miles of elegant production replete with sweeping aerial shots that present Highclere Castle and its 5000 acre estate, the setting for Downton Abbey, as a magnificent example of Jacobethan architecture and a glowing symbol of an aristocratic England that once was.

As far as the plot lines are concerned, they all spin off of the Royal visit and range from petty jealousies, petty theft and pathetic attempts at assassination. Playing more like the final, tie up the loose ends episode of a long running series than a stand-alone film, the worldwide audience reaction (the film opened first in Australia) has been both predictable and lucrative. The film was budgeted at $175 Million and as of the first week of release, had already eclipsed that figure by a factor of two.

In reviewing the critics’ responses from the global release, one statement stands out as being a rather complete evaluation of the film. It comes from Paul Whitington, critic for the Irish Independent. “’Downton Abbey’ is such a harmless and charming confection that it becomes possible to suppress one’s inner socialist for the duration.”

“Downton Abbey” runs 2 hours and 3 minutes, is rated PG and is playing in wide release. 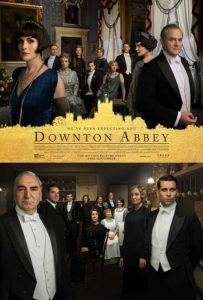