In local theaters and streaming on June 11th

It only seems fair that one of the first forays into in-theater film viewing in a post-pandemic summer should be a “feel good” film about real people who do everyday (read “dull”) jobs and end up getting hit with “the lucky stick.”

DREAM HORSE is one of those engaging films “based on a true story” that would never have been made if the ending weren’t happy, the terrors and trials of the characters hadn’t been paid off and there weren’t enough quirky characters scattered through the story to prompt the occasional laugh. 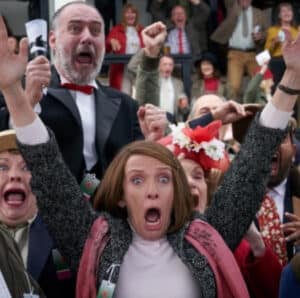 Jan Vokes is a solid citizen. She works two jobs to keep the family going because Brian, her husband (Owen Teale), lost his job and never found another one. Toni Collette as Jan is a magnet on screen. The director, Euros Lyn, loves to play off of her expressions at every twist and turn, and she does not disappoint.

When Jan struggles to find a way out of the dismal swamp that is life in a small Welsh village, an overheard conversation in a local pub featuring Howard Davies, a salaried tax accountant who hates his job, sparks the idea of breeding a race horse. Damian Lewis as Howard had some serious family baggage to deal with, but the allure of “the sport of kings” is too great, and he takes the risk.

Like any good story, there are ups and downs. There are the moments that teeter on tragedy and disappointment, but the clouds open at the last moment, the sun shines down and we are caught up in the story of Dream Alliance, the racehorse that not only emerges from the ignominy of being raised in a shed behind a small Welsh house, suffering disastrous injury and being the focal point of growing tensions within the syndicate of locals who chip in, monthly, to race in the Welch National.

DREAM HORSE is the kind of film that attracts families, pays off the flirtation with tragedy by emerging as an affirmation of tenacity and character … and makes us happy that there are movies on the big screen, again.

The fact that DREAM HORSE is based on a true, heart-warming story is fully punctuated by the closing credits of the film. Without ruining the effect, may we encourage full viewing so that the audience can see the cast standing by the actual characters they portrayed, singing karaoke to a classic Tom Jones ballad. Don’t be ashamed to sing along. 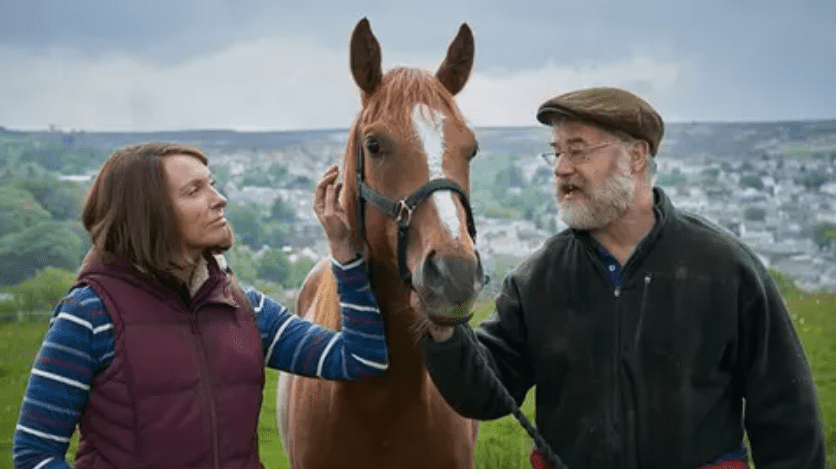