There are moments at the beginning of Autumn de Wilde’s rendition of Jane Austen’s “Emma” when those who have gathered for their latest “Austen fix” may rightly wonder if the engine will ever start … if the whip will ever be cracked and the carriage begin to move.  For reasons best known to the first time feature film director, the pace and engagement of the film seems to be slogging through mud.  Each step is an effort.  There seems to be no discernable direction for the narrative.

Fortunately, the performance of Anya Taylor-Joy in the title role shows enough tenacity to pull the entire lavish production out of the mud and back on track to both satisfy those devoted to Jane Austen’s novels and those who have been dragged along for the evening. 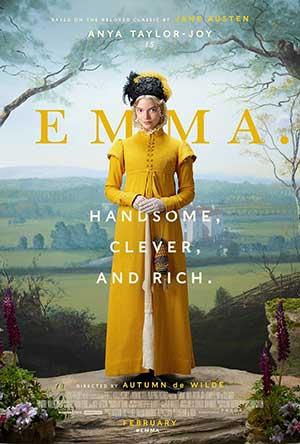 In brief summary, Emma is a young, spoiled and self-important young lady who lives in painless opulence with her father, played with expected wit and quirky charm by Bill Nighy.  Because she has “no visible means of support” other than being born into wealth, she seems to find pleasure in messing with the lives of those around her, most notably the young lady she has decided to mentor portrayed with painful innocence by Mia Goth.  Emma is oblivious to the clumsiness of her efforts and the pain they cause.

The seemingly ever present neighbor, played with the frustrations and foibles of a much more contemporary characterization by singer/songwriter/actor Johnny Flynn has the unenviable task of making Emma human … a feat he finally accomplishes by angrily pointing out her cruelty and hurtful naivete.

Austen’s period piece (written in 1815) is a romantic comedy.  It is also a stunning expose of class distinctions and the numbing boredom of the idle rich who are attended by silent, nameless, faceless servants. As would be expected, there are pairings that become done, then undone, characters crossed as in the period dances, then redone.

Emma presides over all of them and Taylor-Joy does an admirable job of reflecting the disbelief, outrage and confusion when things don’t work out as planned.  As is the case with most Regency Period novels, things work themselves out in the end and the right people stand before the local cleric to tie the knot.  Case closed.

The script for “Emma.” (note the period at the end of the title, which must mean something … but what could it be?) was written by Eleanor Catton, the Man Booker Prize winning novelist and screenwriter who has contributed several notable works in both forms.  The script is not what slows the carriage, makes the loping across English countryside seem endless or has the audience wondering when the dance scene will mercifully come to an end.  “Emma.” Is a film that indulges in itself, requiring that the audience come along.

“Emma.” Is in wide release including The Moviehouse in Millerton and Lyceum in Red Hook, both in NY as well as the Triplex in Great Barrington, MA and Bantam Cinema in CT.  The film is rated PG.